Now that gold has touched the psychologically significant $1,300 level for the first time since June of last year, investors are wondering what’s next for the world’s most popular precious metal. Will more barriers be broken, and how will the rest of the year play out?

If you’ve been holding gold for the past year, I don’t need to tell you that the market has been testing our patience. With the U.S. dollar having an unusually robust year due to fears of the Fed accelerating the pace of rate hikes, it’s fair to say that for gold holders, midyear 2018 was a summer we’d rather forget:

As expected, the Fed backed off of its hawkish posturing and halved its 2019 forecast from four interest rate hikes to only two. After all, they got a taste of what happens when they push their quantitative tightening policy too far, too fast: the stock market corrected by 20 percent, sparking fears of a full-on crash.

The Fed backed off, but the correction was deep and scary enough to push investors back into gold – which they should never have sold off in the first place, but these dips are nothing but opportunities to accumulate, as far as I’m concerned. Besides, the U.S. dollar never stays strong for long, and it’s back to its usual devaluation mode, opening the door to further gains in gold.

Not that gold needs an excuse or a catalyst to clear the next hurdles: $1,400 and $1,500 – which aren’t really asking for too much, since gold demonstrated in 2011 that it’s capable of reaching the $1,900 level quickly when investors are ready to send it there.

Given gold’s recent price action, $1,900 this or next year is not out of the question. Friday, January 25 was an especially encouraging day for long-side gold futures traders, with electronic traders pushing gold up to a seven-month high following the close of the North American equity markets: 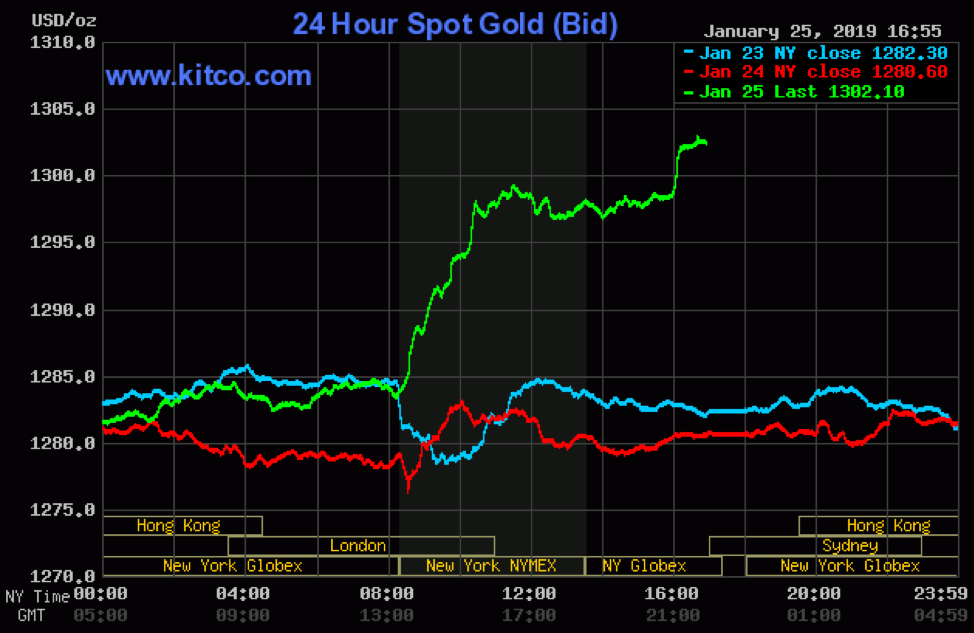 As you can see, $1,300 was like a magnet to the futures traders, with algorithmic trading and pre-set buy limit orders (along with a helping of short covering for the unfortunate gold bears) most likely factoring into the sharp price action.

It’s likely to be just the beginning as the dominoes fall in the global economy, with world leaders and central bankers openly admitting that growth is slowing and caution is advised. And since gold is the ideal market hedge for cautious investors, it won’t surprise me at all when $1,400 and $1,500 are breached much faster than it took to break through the $1,200-to-$1,300 range.

Not that I expect every day to be like January 25, which was gold’s best one-day rally since early November and an exhilarating finish to gold’s best weekly performance since the final trading week of 2018. Most days won’t be as bullish as that, but I do expect a general uptrend in the coming months.

Now that the Federal Reserve is likely to sit on their hands for the foreseeable future and the dollar has nothing to support it, there’s a whole lot of upside in store for gold in 2019. It won’t be much longer before $1,300 becomes a faded memory – a milestone long gone, never to be seen again.