If consumerism were an Olympic sport, America would have more gold medals than Mark Spitz and Michael Phelps put together. But, as in numerous other areas of finance, China is threatening to unseat America’s dominant position in a world that’s changing rapidly and shaking up multi-generational assumptions.

This point was driven home recently when it was announced that Chinese online commerce giant Alibaba had eclipsed Amazon’s estimated Prime Day sales – in less than 10 minutes, if you can believe it. You can attribute this to China’s larger population (1.4 billion versus America’s 3.3 million), but ongoing trends indicate that it’s deeper than that.

First, let’s look at what happened in those 10 minutes. Alibaba’s massively hyped “Singles Day” – which is a kind of anti-Valentine’s Day in which single people buy themselves gifts to celebrate their singledom, but has morphed into something bigger than Black Friday and Cyber Monday combined – generated more than $4.68 billion in sales within its first 600 seconds.

While we’re waiting for 2018’s final counts to come in, we can marvel at how handily China’s shopping extravaganza has beaten America’s best efforts at rabid consumerism in past holiday seasons: 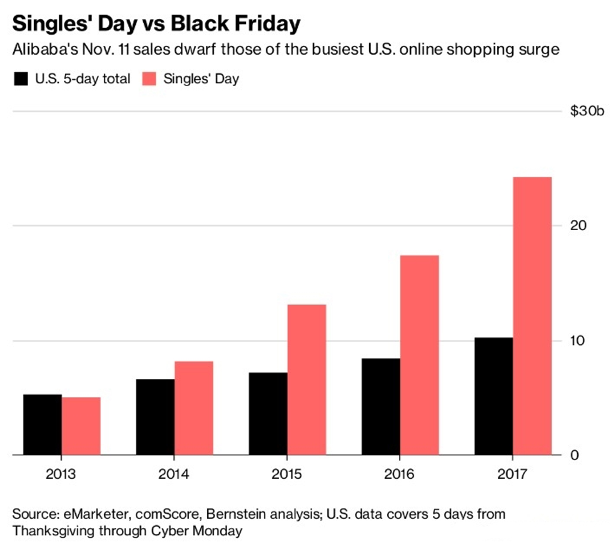 Note that it wasn’t always that way: prior to 2014, Black Friday was the planet’s dominant spend-fest. So how did China overtake the U.S.? They took a page from America’s own marketing book and distorted the true and original meaning of what was intended to be a non-commercial grassroots movement.

Singles’ Day was first conceived in the 1990s by a group of college students to protest against traditional couple-centric festivals in China. Alibaba took this movement and bastardized it, promoting Singles’ Day as an “opportunity” for consumers to splurge on gifts for themselves and bribing them with steep discounts.

But of course we can’t just blame Alibaba for the stunning growth of Chinese consumerism, as China has been picking up America’s habits for decades. China’s rapidly expanding middle class has been eagerly buying brand-name clothes, cars, and smartphones; Shanghai is now often referred to as the “Paris of the East.”

It could be argued that 2018 will be a tipping point, as Chinese retail sales are now equal to America’s for the first time in history. Looking at the trajectory, there’s little doubt that China will surpass the U.S. in short order: 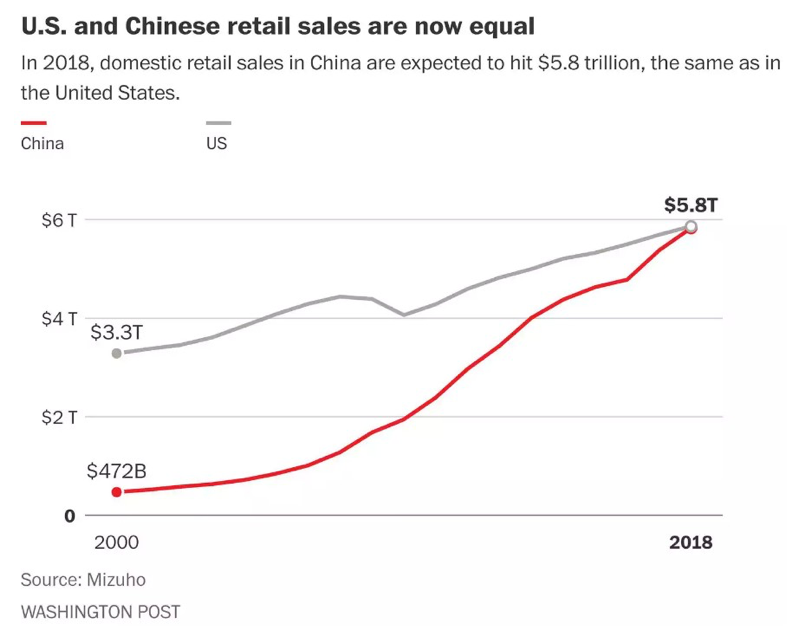 As expected, the Chinese government hasn’t stood in the way of this ballooning consumerism. The question then becomes: can China spend its way out of the nation’s trade-war woes? And, on a deeper level, is massive consumerism good for any nation’s economy in the long term?

It’s certainly good for Alibaba – that much we know for sure. Alibaba’s Singles’ Day sales topped $25 billion in 2017, and they’re expecting bigger numbers this year. Whether all of this spending will add up to national prosperity or crippling consumer debt remains to be seen; in the meantime, the “Shop ’til you drop” mantra continues its metastasis throughout the civilized world.