If a nation is only as strong as its constituent states, then America is in serious trouble. Some states are in worse shape than others, but unfunded liabilities have gotten so bad that the nation as a whole is threatened with financial ruin.

Truth in Accounting releases a report each year called Financial State of the States, and it’s much more accurate, complete, and readable than anything you’ll see from the U.S. government. I believe it’s every informed American’s duty to seek independent sources on the country’s financial health, and this source has painted a particularly bleak picture.

According to Truth in Accounting’s recently released report, the latest findings indicate that out of the 50 states, 40 of them don’t have enough money to pay their bills – and this is true despite the fact that 49 states require, by law, that they balance their budgets.

The greatest financial burdens on the states are the usual suspects: pension debt (which totaled an astounding $824 billion this year) and other post-employment benefits (which include retiree health-care debt and totaled $664.6 billion this year).

Remember, this is only the individual states’ debts; it doesn’t include the national debt, which is quickly approaching $23 trillion. With these ominous figures, both the states and the country are paying billions of dollars annually just to pay off the interest on the debt; that’s one of the reasons why the government is pushing so hard for a cheap dollar, which would make these interest payments less burdensome.

Altogether, Truth in Accounting identified $1.5 trillion of state-level debt in the span of just one year. This debt burden isn’t distributed equally, however, as some states are in worse shape than others. Truth in Accounting has coined the term “sinkhole states” for the most egregious offenders, and if you’re thinking that they’re all going to be poverty-stricken localities, you’re wrong:

You probably didn’t expect to see Connecticut or Massachusetts on the sinkhole states list, but debt burden isn’t biased towards any particular region or demographic segment of the country. Rather, it’s a function of government malfeasance: elected leaders mismanaging taxpayer funds and kicking the can down the road until the debt burden becomes unmanageable.

The chart shown above represents each state’s debt burden per taxpayer; in other words, it’s the amount of money each taxpayer would have to contribute in order for their state to pay off its debt in full (not that anybody’s counting on that happening within our lifetime).

The fact that New Jersey is in the worst position might surprise you, but if you’ve been following these stats for a while, you shouldn’t be surprised at all. New Jersey has held the first-place position of most per-taxpayer state-level debt since 2014; today, the state would somehow need to come up with $208.8 billion to pay its bills.

Illinois would actually need to come up with more money than New Jersey – $223.9 billion, to be precise – to settle its state-level debt, but the per-taxpayer debt burden is “only” $52,600, putting Illinois in second place according to that metric.

How do politicians in these states get away with this, year after year? Much of it has to do with accounting tricks: counting borrowed money as “income,” inflating revenue assumptions, understating costs, and delaying the payment of current bills until next year (again, kicking the can down the road) are age-old tactics that elected officials continue to use. 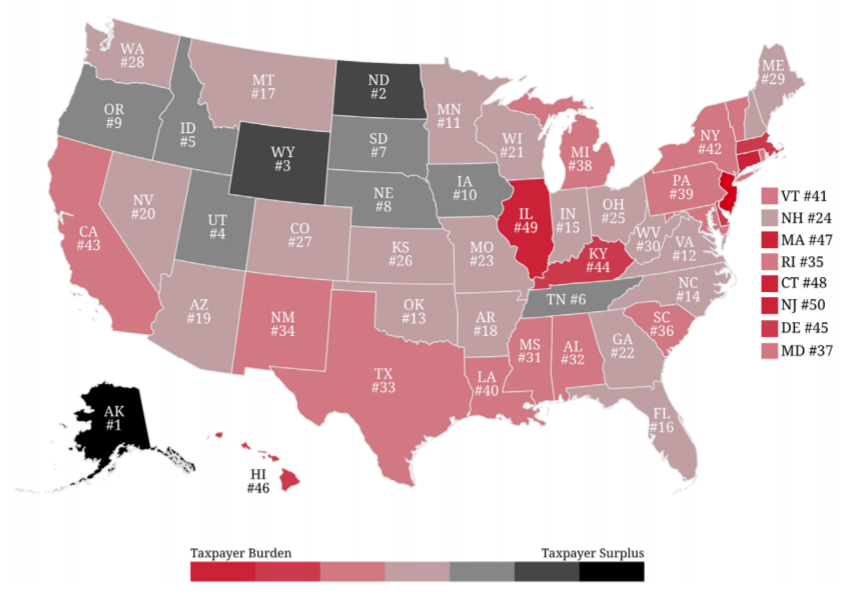 They also take their sweet time in making their annual financial reports public, thereby hiding the truth from their constituency until it’s old news that the mainstream media won’t bother to report on anyway. Unsurprisingly, heavily debt-burdened states tend to take the longest to make their financial reports public; most recently, Illinois took 418 to do this and New Jersey took 304 days.

As a basis of comparison, most corporate financial reports are issued within 45 days of the company’s fiscal year-end. As citizens, we must think of ourselves as shareholders in our state and our nation: without timely and accurate financial information, we’re powerless to hold our government accountable.

Self-education is the first step in taking action against state-level waste, irresponsibility, and malfeasance. When citizens don’t know how much their elected officials are spending – and how little they’re saving for the future – in time, regrettably, there won’t be any future left to save.