I want to discuss my journey to becoming a millionaire. It’s not attention I like to bring on myself, but some things just need to be said.

I was fortunate in that by the time I turned 30 years old, I was officially a millionaire. This came from a number of factors and incredible synergy that took place in my life from a very early age, from great parents to an innate desire to not spend my efforts only to tread water, but to build something that self-generates and grows with time and learning to deliver for others.

I was born into a middle-class household where I had an incredible childhood, but by no means was I living some ultra-privileged lifestyle with every advantage at my fingertips. And no disrespect for my parents because I had everything I needed, and most importantly, they poured their hearts out for me and were there for me, which was a major reason why I am where I am today.

Growing up, I was taught to value money and not to waste. My family was spending-conscious, not ordering the most expensive things on the menus, not being careless with household utilities (which sometimes meant hot summer nights and cooler winters), rarely throwing away food, and never overpaying for premium services or material possessions. I didn’t understand for many years that not having the best brands could make someone insecure, and I fortunately didn’t worry about comparing myself to other people because I was running my own race.

In high school, I worked as the karate school janitor in exchange for karate lessons, and I ultimately became a black belt. Scrubbing down toilets is something I became very familiar with, and because it wasn’t just handed to me, the sacrifice I put in made me value the education I was receiving there more and I wanted to get the most from the lessons and I thrived in martial arts.

I remember being in high school and staying home periodically on Friday nights to not spend money at the movie theaters or being out with my friends at Chili’s ordering a side salad and a water just to save a few bucks.

But quite frankly, I didn’t connect very well with kids my age because from early on, I was interested in financial freedom, so I ended up spending much of my time with older friends that I considered mentors to me in my most formattable years.

The person who bridged this gap for me and someone I preferred to spend time with over my peers was my older cousin, Daniel Ameduri. He is someone who is a relentless entrepreneur and has just come out with his book, “Don’t Save for Retirement.”

I was extremely fortunate to have a very close relationship with Daniel, but the reason I am introducing everyone to him today is that you can get to know him real well because he has just released his brand new book. 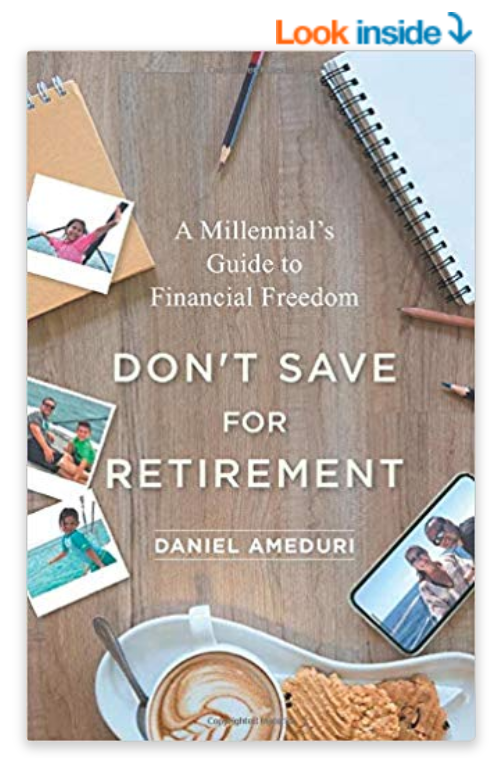 In middle school and high school, I was busy talking with him about cash-flowing real estate, stocks, and businesses to start, along with following the economy as it pertained to monetary decisions I was going to be making.

The things I learned in the passenger’s seat of his car as we were hunting real estate deals and discussing investments have never left me, and I was fortunate to have had this influence as I aged.

While my friends were out playing video games and spending their allowance money in high school, I was spending my time learning from him.

I cannot list everything in this one email that I’ve learned from him throughout the years, but one thing that was a cornerstone for thinking in my journey to becoming a millionaire was opting out of conventional thinking. Average people get average results and are happy being stuck in the rat race. For me, that was failure.

I knew that I wanted to live life on my terms, and this meant freedom.

I had that innate sense from a young age to have an urgency to save, and I knew the few dollars a day I would stash away was destined for a legacy that would continuously be built. And it was through his mentorship that I learned about purchasing cash flow, creative financing, and not investing like the masses.

I have to tell you that Daniel’s financial IQ and life skills are off the charts, and now that his latest book is out, you can tap into his mindset, which is a formula that anyone can apply to get ahead in their life.

Having said that, you might find this book OFFENSIVE because it’s going to torch the conventional thinking of life success as going to college, putting money away in a 401(k), and retiring when you’re 65 to finally start enjoying your life. And believe me, for many, this is an ingrained way of life that he completely flips the script on.

Young people today do not need more Kardashian updates, and retirees can’t be dependent on a government handout if they truly want to live life on their terms.

As a disclaimer, Daniel’s story isn’t a complete fairytale. I know first-hand the ups and downs watching him make his initial millions, watching him on the brink of bankruptcy, and then with incredible fortitude fighting his way back once again. This book doesn’t hold back, and you get a taste of how resilient he has been to get to where he is now launching his first book.

Daniel has been there for me as I purchased my first condo, bought my first stocks, and we even started multiple businesses together. I became a millionaire by the time I was 30 years old, and I am forever grateful to him for his influence on my life.

His book is a documentary on the roller coaster journey of financial bliss to completely blowing up, and then regaining this ground once again in his life. I believe it will set you in place to become financially free – and quite possibly a millionaire.

Not as well-known as Robert Kiyosaki or Tony Robbins, in my mind, Daniel Ameduri has been even more influential in my life, and even the way I raise my children has been mentored by him.

It’s a pleasure for me to introduce more people to Daniel, and I encourage everyone to sample the first chapter here.

Never base any decision off of our emails. CrushTheStreet.com stock profiles are intended to be stock ideas, NOT recommendations. The ideas we present are high risk and you can lose your entire investment, we are not stock pickers, market timers, investment advisers, and you should not base any investment decision off our website, emails, videos, or anything we publish.  Please do your own research before investing. It is crucial that you at least look at current SEC filings and read the latest press releases. Information contained in this profile was extracted from current documents filed with the SEC, the company web site and other publicly available sources deemed reliable.   Never base any investment decision from information contained in our website or emails or any or our publications. Our report is not intended to be, nor should it be construed as an offer to buy or sell, or a solicitation of an offer to buy or sell securities, or as a recommendation to purchase anything. This publication may provide the addresses or contain hyperlinks to websites; we disclaim any responsibility for the content of any such other websites.  Please use our site as a place to get ideas. Enjoy our videos and news analysis, but never make an investment decision off of anything we say. Please review our entire disclaimer at CrushTheStreet.com.