Adding Insult to Injury: Salaries for the Top 1% are Higher than Ever

The widening wealth gap between the haves and the have-nots has been a scarcely discussed topic in the traditional media. Whether the fat cats who own the mega-media outlets want to suppress this discussion, I’ll leave up to you to decide… but what’s indisputable is the shameful secret that has tarnished America’s reputation as the land of opportunity.

Interestingly, it was one of those fat cats who broke the story last year: Ray Dalio, billionaire and co-CIO and co-chairman at Bridgewater Associates. But he didn’t discuss the unsettling wealth disparity on a mainstream financial television program on in a magazine or newspaper; he spoke out on his LinkedIn blog, where he would (maybe) have more freedom to express himself.

In that landmark blog post, Dalio dichotomized Americans into two wealth classes: the top 40% and the bottom 60%. He noted, among other unsettling observations, that the majority of people in the lower 60% have no savings and scant financial security, and that more than half of the bottom 60% save no money at all on a monthly basis, and hence are entirely vulnerable to unexpected expenses: 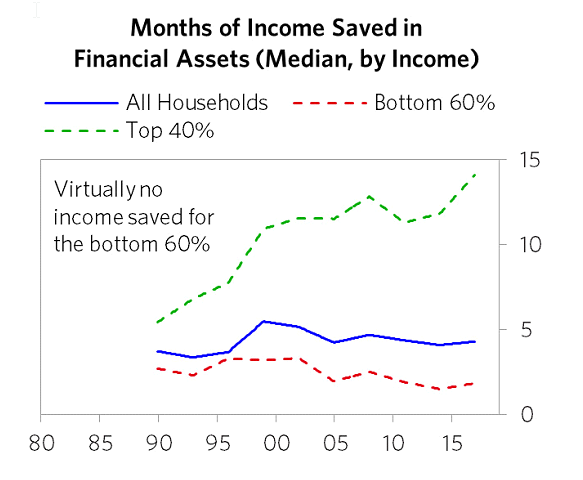 Dalio also pointed out that Americans in the top 40% have, on average, 10 times as much wealth as those in the bottom 60%; that figure is up from 6 times as much in 1980:

Armed with these and other facts, Dalio spoke of two economies: one for the ultra-wealthy and another one for the rest of us, who are essentially left fighting over the scraps. Thus, any pro-growth numbers put out by the government or anyone else are meaningless, concludes Dalio: this is because “the wealth and income skews are so great that average statistics no longer reflect the conditions of the average man.”

And now, in what might be deemed the final nail in the coffin of the American Dream, the Economic Policy Institute has reported that the top 1% now earn the highest wages ever – up 157.3% since 1979: 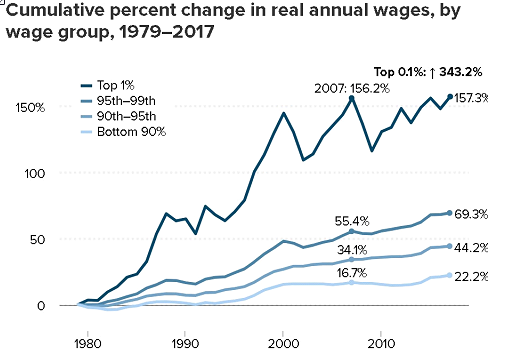 The non-profit Institute, citing data from the U.S. Social Security Administration, had plenty of disconcerting stats to report: 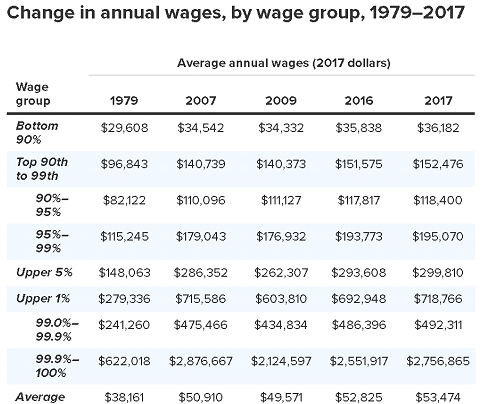 It’s yet another blow to the embattled middle class in America, where income inequality has become a natural state of affairs and the wealth gap is exacerbated by rising inflation, wage stagnation, and mainstream media programs that refuse to report it.