Chinese investments have represented a media darling for the mainstream financial media. Even the alternative-investment community has jumped on the bull ride for obvious reasons: China has the world’s largest population, its economic engine has registered tremendous growth, and its people are becoming more net and tech-savvy, among other attributes.

But lately, Chinese investments have taken a turn for the worse. Before he became President, Donald Trump repeatedly lashed out at our international rivals, with China being a favorite target. His most persistent accusation is that the Asian juggernaut’s central bank manipulates their currency. As an exporting nation, a weak yuan greatly benefits their economic agenda.

Throughout President Trump’s first year in office, his criticisms were mostly bluster. As a result, Chinese investments soared in 2017, with many individual names hitting all-time records. But this year, Trump has unleashed billions in tariffs. While they hurt our economy, they’re clearly hurting China more.

Here are three reasons why you should steer clear from Chinese investments for now:

One of the less-appreciated catalysts for Chinese investments in prior years was political capitulation: in critical areas, the U.S. needed China more than the other way around.

This is most apparent in our ongoing conflict with North Korea. Recent administrations have relied upon our relationship with China (and to a lesser extent, Russia) to apply pressure on the hermit nation. The Chinese leadership understood this, and used this knowledge to their advantage.

But with President Trump meeting with North Korea’s Kim Jong-un, China suddenly lost leverage. The message now is that Trump will take care of North Korea on his own. This new foreign policy also means that the U.S. has the ball to further impose tariffs and sanctions.

The Chinese Want the Pain to Stop

In a column I wrote for mainstream media, I mentioned that The New York Times reported that the Chinese are incredibly upset at U.S. tariffs. However, we are not the target of their anger. Instead, the Chinese are lashing out at their own leadership.

Government censors are working full-time to erase the criticisms online, but the cat is out of the bag. Individual Chinese are furious because they’ve tasted the good life. Now that our foreign policy threatens their various luxuries, many affected people are fighting back.

But that puts their government in a bad spot. They would either publicly capitulate and lose face – something they’re loathe to do – or drag on the trade war. I foresee the latter, which is why I’m cautious on Chinese investments at this juncture.

Finally, I don’t like the technical posture for Chinese investments. Take a look at the below chart for the Shanghai index: 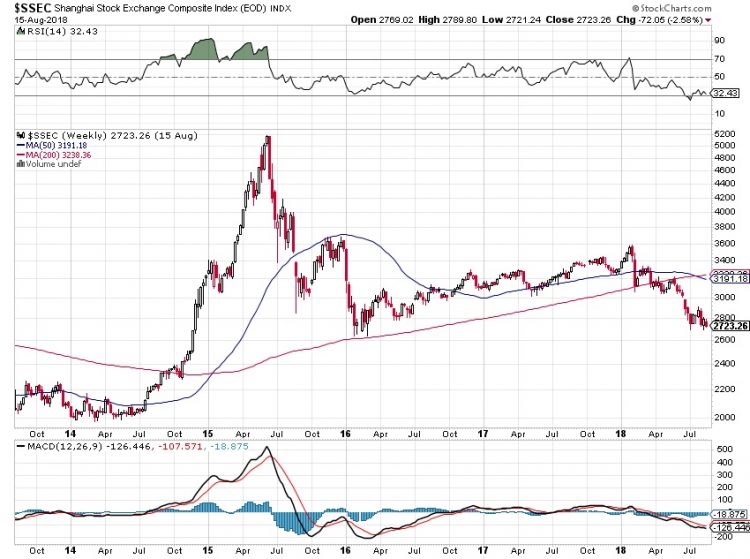 Currently, the index is riding on very flimsy support. I’m not sure if it will hold given our tough foreign policy against China. Plus, President Trump is highly unlikely to back down from his position as it will negatively impact his credibility.

Also note that the Shanghai index formed a bearish head-and-shoulders pattern throughout 2015. It broke out of it in 2016 and 2017. But now, the index must pay the piper.