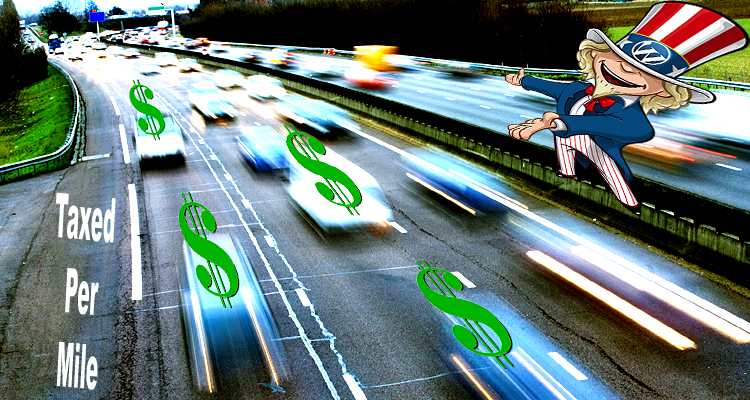 The current predicament of U.S. domestic and international affairs was predictable after the 2020 election result stomped onto your doorstep. I say that without remorse because we got what we have voted for over the course of many years, rigged or not. The U.S. Constitution does not say “you” or “them.” It says “We The People.” Price hikes at your local gas station are a warning shot across the bow over where we’re heading, and the conservatives’ allowance of the woken to cancel Dr. Zeus and shove his culture up the warm and fuzzy areas of your private misery is an alarm bell.

The level of whining and bickering between the citizenry on all issues foreign or domestic has devolved into pathetic absurdity by blaming everyone else besides themselves. Heck, you can’t even post a tweet backed by facts without being ruthlessly trolled by the membership of a misinformed conspiratorium that fervently believes Trump is the antichrist or a messiah that will save us all from the socialists. Whether or not Trump turns out to be one of those faces as he promotes and takes full responsibility for a gene-modification jab, we must deal with the cards dealt and respect everyone’s First Amendment right when exercised respectfully, rather than stoop to the ilk of Jack’s technocratic minions.

In the meantime, your glorious leaders are in the process of rolling out legislation and programs that will tax you for every mile you drive on the roads you’ve already been taxed for via the gas pump to maintain them. That tax scheme adds a whole new paradigm to the meaning of double taxation if toll booths across the nation are not promptly moved to the local landfill.

If a federal system was rolled out nationwide, it would have to rely on state and local enforcement agencies to ensure compliance. Oregon and Utah have already launched a program to tax per mile driven and many more states are willing and able to implement a Vehicle Miles Traveled (VMT) tax system. A bill that passed the House last year to set up a national pilot program and a Senate committee endorsed the idea.

Vehicle Mile Tax Draws Fresh Attention as Buttigieg Takes Post… “Proposals for a VMT tax have been considered and rejected in years past. This time may be different, lawmakers and experts say. Increased investment in electric vehicles, Democratic control of Congress, bipartisan interest, and President Joe Biden’s opposition to increasing the gas tax could jump start a push to a user-based fee.” – Bloomberg, Feb. 2

ATRI puts $20B price tag on vehicle-miles-traveled tax… “The report comes as Congress begins to negotiate the next infrastructure bill and figure out how to keep the federal highway trust fund (HTF), which pays for the country’s roads and bridges, from going bankrupt. The Congressional Budget Office estimates the HTF will be exhausted by 2022.” – FreightWaves, Mar. 17

Highways in the U.S. are primarily funded by local, state, and federal fuel taxes. States have imposed a gasoline consumption tax since 1919 and the federal tax was introduced in The Revenue Act of 1932. A combination of improved fuel economy in vehicles, the growth of electric vehicles (EVs), and inflation have resulted in legislative actions and research mechanisms on how to fund and sustain the U.S. transportation infrastructure going forward. A total of 36 states have increased fuel tax rates over the last decade, but the federal government has not updated the 18.4-cent tax since 1993. 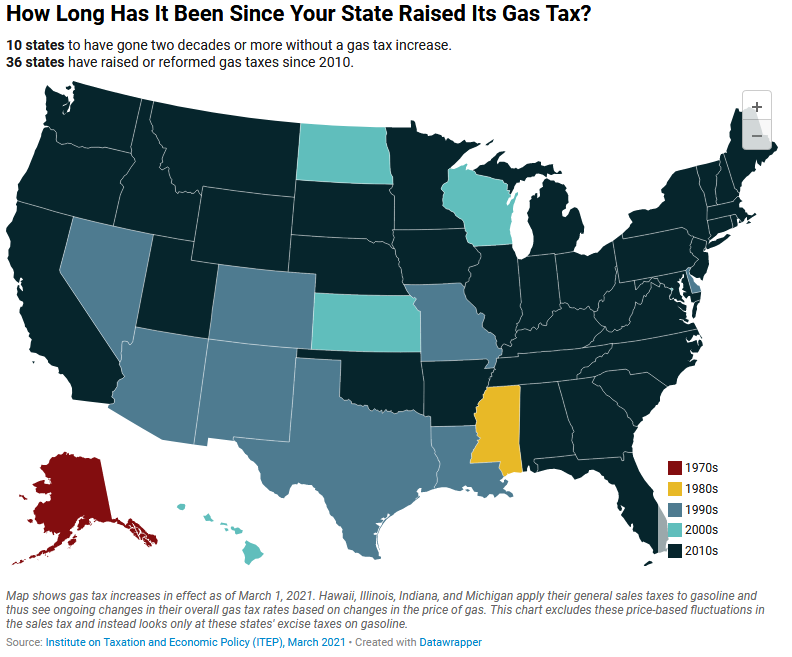 The funding for the Fixing America’s Surface Transportation (FAST) Act expired in 2020 and Congress must come up with a plan to keep the Highway Trust Fund (HTF) subsidized going forward. According to Congressional Budget Office (CBO) estimates, the HTF will run out of cash by the end of 2021. Its deficit is projected to reach $70 billion shortly after the FAST Act’s funding expires. Over the last decade or so, highway funding has increasingly been paid for by the HTF, which is not directly funded by the federal fuel tax. That is where a federal VMT tax has come into the picture.

“At the federal level, the revenue from motor fuel taxes has not been sufficient to cover transportation expenditures since 2008, and there is no reason to think this development will reverse itself. On the contrary, it is likely to get worse, driven by technological advances and regulation like the Corporate Average Fuel Economy (CAFE) standards.” – Tax Foundation, Aug. 2020

The majority of taxpayers are not aware of the amount of state and federal taxes included at the gas pump. A VMT program would dramatically shift taxpayer psychology from ambivalence over current rates to visible amounts that would be paid directly via a VMT tax to meet infrastructure needs.

“Our country’s outstanding highway system was built on the user fee principle – that those who benefit from a use should share in its cost.” – President Ronald Reagan

Capitol Hill is chatting about funding a $4 trillion infrastructure bill. After having spent $1.9 trillion on COVID pork, it may be a hard sell in the Senate. Increasing the federal fuel tax as part of the plan is apparently out of the picture, but I suspect there will be funding within any version of an infrastructure bill to plan the mechanics of implementing a VMT tax in the near future.

Business leaders engage Biden administration on ways to pay for infrastructure… “DOT Secretary Pete Buttigieg has publicly pushed back on raising the gas tax as a way to pay for improvements to the nation’s infrastructure.” – CNBC, Mar. 17

The days of hopping into your ride for the sake of cruising under a beautiful day or night sky while listening to music will eventually come with thoughts about how much more it will cost. It’s just another small joy in life that may end up in a trash heap due to environmental cancel-culture cultists.

The Cars: Moving In Stereo 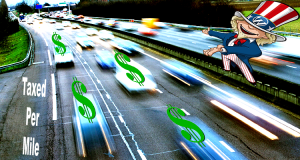