A Mutant Emerges in the Second Wave 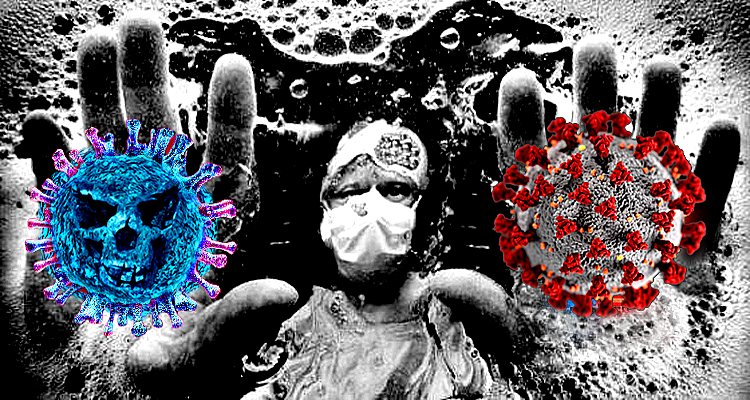 My sincere wish was for “Let ‘er Rip” to be my last installment on the pandemic’s virulence. The story’s development is a tragedy in itself for so many people, but to experience judgment and willful blindness by some folks who should know better is partly due to a mainstream and alt-media misinformation conspiratorium, political biases, propaganda warfare, or attacks by trolls of disgust vs. a selfless effort to inform ahead of the curve without prejudice, is ‘beyond the pale.’

Before I venture into a worst-case scenario that may be taking shape, the following articles, interviews, and quotes are from my pandemic exclusives with CrushTheStreet and subsequent Twitter threads since January.

“There is nothing, zero data that says anything about the Italian strain-lineage mutation getting milder (less virulent or deadly)… There is not one gene-sequence change (GISAID’s COVID-19 Phylogeny) that anyone can point to that says it is… There are a bunch of people that know nothing about sequences, don’t have a clue, and are misrepresenting the current situation, because they are not hands-on, don’t know how to read a sequence, and are senior people that kinda heard about it, and didn’t really get the details, and they go out and try to adlib it.” – Dr. Henry Niman Ph.D. Virologist, Jul. 2020 (14-minute Audio)

“I write this installment to continue documenting the novel coronavirus SARSCoV2 (aka COVID-19) pandemic from a remote “safe space” in the mountains of New England. I sincerely hope my efforts have not been in vain and encouraged at least a few souls to be prudent in prepping… Opinions in favor of allowing COVID-19 to run its course (let ‘er rip) unchecked is a basic misunderstanding of what herd immunity actually is and how it can be achieved, which is multiplied in modern times with vaccines despite the inherent risk of injecting dangerous adjuvants. Herd immunity develops when a pathogen can no longer spread as easily because it encounters large roadblocks of people who are protected against infection. That dynamic does not create immunity to the virus itself.” – TraderStef, Oct. 23

While plucking away at the keyboard, a few headlines seeped into the mainstream this week that raised an eyebrow to previous reports about mink farm mass-culling in Sweden, Denmark, and the United States with zoonosis in play. 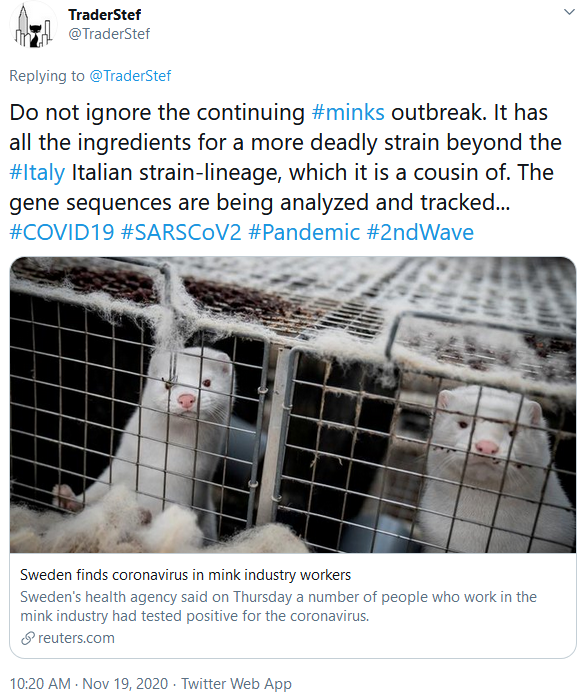 Instead of bats or pangolins, those cute and cuddly minks may be partly responsible for an Italian lineage (95% of the current global reservoir) mutation of significance that the mainstream media is reporting as a “variant.” On Dec. 15 and 18, Dr. Niman discussed the variant and its gene sequence changes within the receptor-binding domain, multiple mutations in the spike protein, the higher viral-load seen in cluster hosts, the increase in transmissibility that includes the young without underlying conditions, potential resistance to the new mRNA vaccines, and he summed up the variant as the “Italian strain on steroids.” Below is a link to his Dec. 18 podcast (25 minutes) and a New England Journal of Medicine publication on a patient from Boston, MA.

Threat Assessment Brief: Rapid increase of a SARS-CoV-2 variant with multiple spike protein mutations observed in the United Kingdom… “Preliminary analysis in the UK suggests that this variant is significantly more transmissible than previously circulating variants, with an estimated potential to increase the reproductive number (Ro aka R naught) by 0.4 or greater with an estimated increased transmissibility of up to 70%… With the implementation of vaccination, close monitoring of COVID-19-vaccinated individuals needs to be ensured to identify possible vaccination failure and breakthrough infections… The unusually high number of spike protein mutations, other genomic properties of the variant, and the high sequencing coverage in the UK suggest that the variant has not emerged through gradual accumulation of mutations in the UK.” – ECDC, Dec. 20

Coronavirus: Scientists alarmed at infectiousness of viral variant… “The variant’s most remarkable feature is the number of mutations that have shaped it. Sir Patrick Vallance, the government’s chief scientific adviser, said 23 letters of the viral genetic code have changed, many of which are associated with the spike protein that the virus uses to get into human cells. Coronaviruses do not usually mutate so quickly, typically accumulating about two genetic changes per month. ‘This new variant is very concerning, and is unlike anything we have seen so far in the pandemic,’ said Jeffrey Barrett, director of the Covid Genomics Initiative at the Welcome Sanger Institute.” – Financial Times, Dec. 20

Since this variant is significantly more contagious than the dominant reservoir of the existing virus, it is a given that it will contribute to a larger pool of patients, infections, hospitalizations, and unfortunately death. That in itself does not equate to a conclusion that this variant is more deadly. Lag time is usually an overlooked variable when assessing a pandemic because mother nature is always one step ahead of humanity and its bureaucracy, which means we will not know how this specific situation plays out for several more weeks. Since it did not originate in the U.K. and there are multiple clusters and individual cases appearing in several locations, it is likely that this variant has stealthily seeded itself in numerous countries for at least a couple of months.

I will close up shop tonight with a few articles in chronological order since Dec. 14, then off to keep an eye on financial markets overnight. 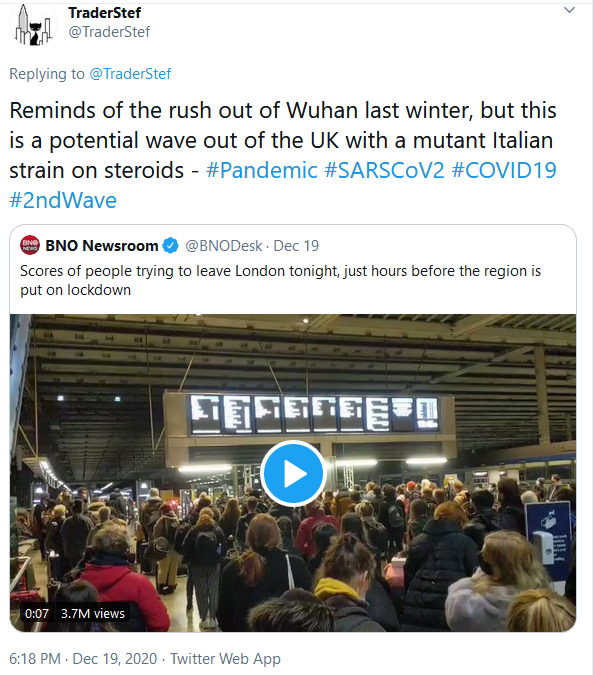 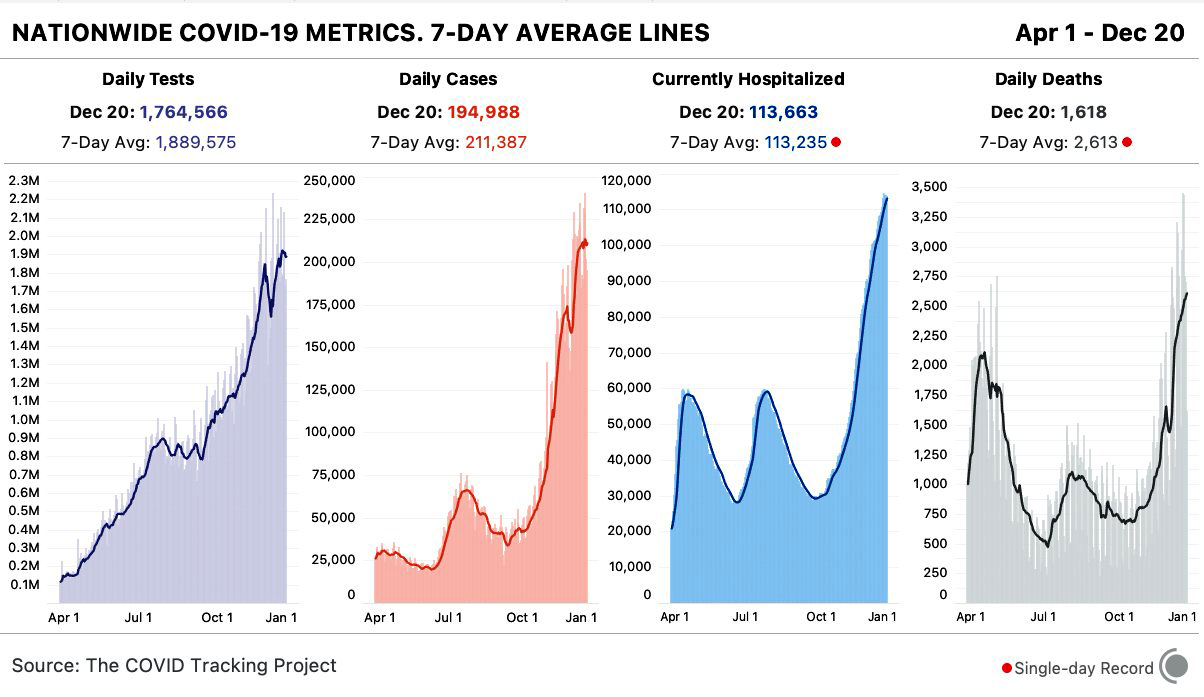