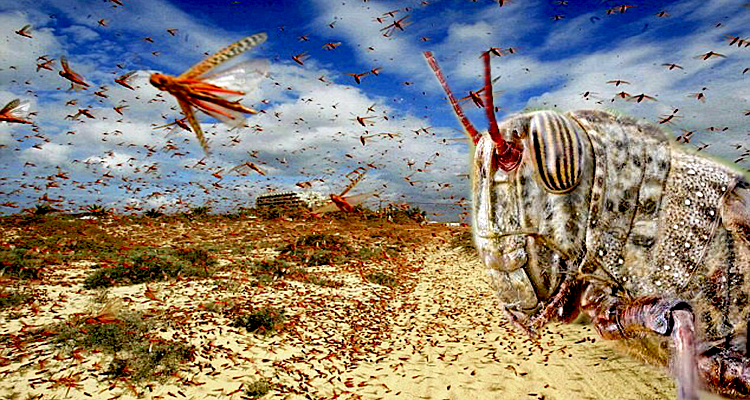 While the coronavirus (COVID-19) epidemic creeps into global pandemic territory, an unrelated issued surfaced that has the United Nations on emergency footing and warns of a humanitarian disaster that may reach a plague level if not immediately dealt with. This is not the first time in the 21st century that swarms of locusts have threatened areas of the world. In some regions of East Africa, the current desert locust (Schistocerca gregaria) outbreak is the worst seen in the last 25-70 years and has affected parts of Eritrea, Djibouti, Ethiopia, Kenya, Somalia, Sudan, and Tanzania. The IGAD has warned that South Sudan and Uganda could be next.

East Africa locusts threaten food security… “Ethiopia, Kenya and Somalia are dealing with desert locust swarms of “unprecedented size and destructive potential” and could spill over into more countries… As favorable breeding conditions continue, the increase in locust swarms could last until June. Moreover, left unchecked, the numbers of crop-devouring insects could grow 500 fold by then… Kenya has not faced a locust threat of this magnitude in 70 years… In a press release issued on Monday, FAO Director-General QU Dongyu said the agency is activating fast-track mechanisms to support governments, warning that the situation is now of ‘international dimensions.’” – Africa Renewal

A desert locust swarm can be 460 square miles in size, contain up to 80 million locusts per square mile, and migrate up to 100 miles per day in the wind. One swarm in Africa is reported to be the size of Moscow or one-and-a-half times the size of London. Another swarm in northeastern Kenya has measured 37 miles long by 25 miles wide. One swarm will consume its own weight in one day and is capable of destroying as much food as 35,000 people would eat in a day.

East Africa is not the only region threatened or suffering. Several swarms have been breeding in India, Iran, and Pakistan since June 2019, and some have moved onto southern Iran, where heavy rains nurture their breeding and could spawn swarms in the spring. Egypt, Eritrea, Saudi Arabia, Sudan, and Yemen are experiencing significant episodes of breeding that may expand into enormous swarms in the coming months. Swarms are on their way to south Sudan, where nearly half of the population is already facing hunger due to the ravages of civil war. Uganda has not experienced a large outbreak of locusts since the 1960s and is preparing for the onslaught.

The desert locust is the most devastating of all locust species because it can severely impact 20% of the Earth’s landmass, destroy the livelihood of 10% of the world’s population, and the poorest of countries suffer the most when farmland is destroyed, resulting in disease or death due to hunger and starvation. The consequences are not limited to food crops and humans, as swarms annihilate the grazing pastures and grain crops that feed cattle and other animals, such as chickens. The onset of desert locusts is not a single event because the swarms lay eggs and start another generation that continues the destruction.

Plague of locusts threatens East African economies as UN sounds alarm… “The UN warned of an unprecedented threat to food security in a part of the world where millions face hunger, and the FAO estimated that 70,000 hectares of crops in Kenya and around 30,000 hectares in Ethiopia had been infested. It added that locusts had attacked coffee and tea crops that account for approximately 30% of Ethiopia’s exports. ‘Rising food prices from a prolonged shortage of key crops fuels the potential for social unrest across East Africa, a region where we already assess political risks as elevated and the ingredients for potential social unrest prevalent,’ Moody’s Vice-President Kelvin Dalrymple said… a dollar value of lost crops has yet to emerge, making it difficult to estimate potential damage… Capital Economics Emerging Markets Economist Virág Fórizs also told CNBC on Thursday that the situation could ‘go from bad to worse’ as the swarms continued to expand.” – CNBC

Mitigating the destruction by exterminating the locust and their eggs is fraught with its own challenges. When chemical fumigation is used, the health of the entire ecosystem is negatively impacted and locating nests is difficult because they are usually located in remote and hart-to-reach areas. Another obstacle is a lack of infrastructure and the political cooperation needed to launch a coordinated response in regions that suffer the most from desert locust. One of the first recorded campaigns that attempted to control locust was in the year 710BC in Iraq, when King Sargon II sent out letters to regional governors asking for cooperation across all borders.

I was unable to confirm rumors that China’s western region may be threatened by the locust outbreak. One report out of Taiwan indicated they had no concerns due to the island’s moist environment, but far eastern regions of Pakistan near China may be a source of concern. Pakistan declared a national emergency over the locust infestation and China is assisting due to a stake they have with importing agriculture products.

Any potential impact on a specific commodity price has not been worthy of coverage by the financial media, except for CNBC noting the destruction of tea and coffee crops in Ethiopia. There will likely be a disruption in commodity markets somewhere along the line. How severe and in which commodity would be pure speculation.

The destruction inflicted upon a region or nation by locusts is not limited to Africa, the Middle East, or Asia. In the summer of 1874, the Rocky Mountain locust species created a swarm reported to be 1,800 miles long by 120 miles wide. That swarm went extinct for reasons that remain a mystery to entomologists.

A Plague of Locusts – Nebraska Stories