A Sinking Feeling About Nuclear Persia Part 3 – JCPOA is DOA

Ever since Biden and his cohorts initiated a soft coup of the United States presidential election in 2020, we have a pandemic-induced Pharmakeia cult to contend with, full-blown economic turmoil, drums of war across the Asian and European continent, threats of food shortages and famine, and the idolization of Great Reset transhumanism that hijack the daily dose of mainstream news. If the geopolitical fallout and WW3 nuclear threat from a Ukraine-Russia proxy war with NATO failed to raise eyebrows, we now have a credible threat from Israel of imminent strikes against Iran’s nuclear facilities following the latest Joint Comprehensive Plan of Action (JCPOA) failure and noncompliance with uranium enrichment guidelines.

“And you will hear of wars and rumors of wars. See that you are not troubled; for all these things must come to pass, but the end is not yet.” –  Matthew 24:6, BibleHub 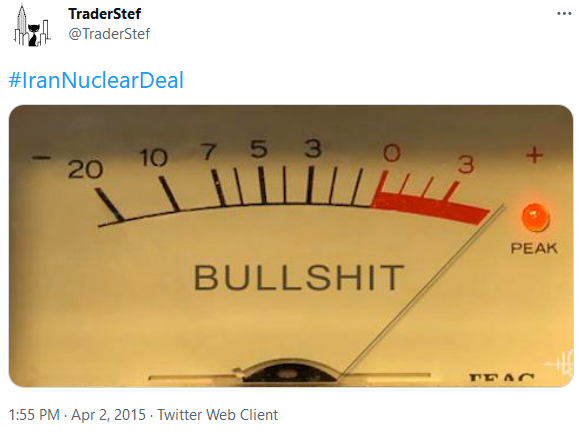 Iran’s Enriched Uranium Stockpile is Now 18 Times 2015 Deal Limit, U.N. Watchdog Says… “Tehran has amassed more than 3,800 kilos of material, IAEA reports, after detecting radioactivity at potential undeclared nuclear sites… The limit in the 2015 deal was set at 300 kilograms (660 pounds) of a specific compound, the equivalent of 202.8 kilograms of uranium. The report also said that Iran is continuing its enrichment of uranium to levels higher than the 3.67 percent limit in the deal. The stockpile of uranium enriched up to 20% is now estimated to be 238.4 kilograms, up 56.3 kilograms since the last report in March, while the amount enriched to 60% stands at 43.1 kilograms, an increase of 9.9 kilograms. Enrichment levels of around 90% are required for use in a nuclear weapon… ‘I am referring to the fact that we, in the last few months, were able to identify traces of enriched uranium in places that had never been declared by Iran as places where any activity was taking place,’ IAEA head Rafael Grossi told a European Parliament Committee. ‘The situation does not look very good. Iran, for the time being, has not been forthcoming in the kind of information we need from them… We are extremely concerned about this,’ Grossi said.” – The Foreign Desk, May 31

President Trump withdrew the United States from the JCPOA deal in 2018 because it failed to restrict Iran’s missile program and regional influence. Sanctions that were lifted by the Obama-Biden administration were immediately reinstated, and Iran began ignoring limitations on its uranium enrichment program in July of 2019. There was a long period where Israel remained relatively silent after I penned “A Sinking Feeling About Nuclear Persia” Part 1 (Twitter thread) in Aug. 2018 and Part 2 (thread) in Dec. 2019.

Efforts by the Biden administration to revive and finalize a new JCPOA deal failed this past winter. Following a March report from the IAEA, Israel abruptly ended its silence and conducted a live military exercise last month with U.S. air refueling support to simulate a military strike on Iran’s nuclear facilities. Cooperation by Biden and the Pentagon was likely encouraged by an intelligence briefing they received in February that Iran was weeks away from a nuclear breakout. There was also Iran’s last-minute demand that resulted in the abrupt suspension of talks in mid-March, Iran’s missile strike on a U.S. military base and consulate in Iraq the day after JCPOA talks were suspended, and the IAEA report in March.

Iran claims missile barrage near US consulate in Iraq… “Iran claimed responsibility Sunday for a missile barrage that struck near a sprawling U.S. consulate complex in northern Iraq, saying it was retaliation for an Israeli strike in Syria that killed two members of its Revolutionary Guard earlier this week… No injuries were reported in Sunday’s attack on the city of Irbil, which marked a significant escalation between the U.S. and Iran.” – Military Times, Mar. 13

Reviving the JCPOA is the better alternative — but can it be made sustainable?… “With almost all issues resolved, negotiations to revive the 2015 Joint Comprehensive Plan of Action (JCPOA) have gridlocked over the Iranian demand, resisted by the Biden administration, that the Islamic Revolutionary Guard Corps (IRGC) be removed from the U.S. list of foreign terrorist organizations.” – Brookings, May 2022

US refuelers to take part in major Israeli drill for strike on Iran… “The unprecedented Israel- US aerial collaboration in a drill simulating a strike on Iran’s nuclear facilities is seen as a potential message to Iran amid long-stalled negotiations in Vienna over a return to the 2015 nuclear deal, a possibility Israel has repeatedly voiced its objection to, warning it would lead to “a more violent, more volatile Middle East”… At the beginning of last year, IDF Chief of Staff Aviv Kohavi announced he had instructed the military to begin drawing up fresh attack plans against Iran. By September, Kohavi said the army had ‘greatly accelerated’ preparations for action against Tehran’s nuclear program…  The aerial drill comes amid a massive military exercise — dubbed ‘Chariots of Fire’ — which involves nearly all units of the IDF, and has focused on training for fighting on Israel’s northern borders, including against the Iran-backed Hezbollah terror group in Lebanon.” – Times of Israel, May 17

Joint Statement on the Meeting of the U.S.-Israel Strategic Consultative Group… “On May 31, 2022, U.S. National Security Advisor Jake Sullivan and Israeli National Security Advisor Dr. Eyal Hulata convened a meeting at the White House of the U.S.-Israel Strategic Consultative Group (SCG)… The officials committed to coordinate on efforts to prevent Iran from acquiring a nuclear weapon and toward deterring Iran’s aggressive regional activities. They also discussed economic and diplomatic steps to achieve these goals and reviewed ongoing cooperation between the U.S. and Israeli militaries.” – WH, Jun. 1

During a meeting in Jerusalem last week, Israeli Prime Minister Naftali Bennett informed the IAEA that Israel is ready to use its right to self-defense to prevent Iran from achieving a nuclear weapon. Bennett “expressed Israel’s deep concern regarding Iran’s continued progress toward achieving nuclear weapons while deceiving the international community by using false information and lies.”

One of the most interesting developments last week was the mainstream media coverage of Israel’s “Iron Beam” laser missile defense system that’s advertised to be operational in early 2023. Israel would not be telling its enemies exactly when the system is implemented. I suspect Iron Beam is currently in service following successful tests and ready to repel any attack after striking Iran’s nuclear facilities.

Iron Beam is capable of intercepting missiles, drones, mortars, anti-tank rockets, and military aircraft. Prime Minister Bennett considers the laser defense system a “game-changer” because not only will it strike the enemy militarily but also “financially bankrupt them.”

Israel says laser missile shield to cost just $2 per interception… “Israel currently depends on shoot-down systems that launch interceptor missiles costing between tens of thousands and millions of dollars to track such projectiles… Palestinian and Lebanese forces have in past wars launched thousands of rockets and mortar bombs at Israel, which has in recent years also intercepted drones it suspects were launched by Iranian-backed fighters near its borders. “Until today, it cost us a lot of money to intercept each rocket. Today they (the enemy) can invest tens of thousands of dollars in a rocket and we will invest $2 on the electricity for intercepting that rocket.” – Reuters, Jun. 1

Preparations for an attack on Iran? – Amir Tsarfati, Jun. 1