An Elite Pedophile Rat on a Suicide Scandal Running Wheel 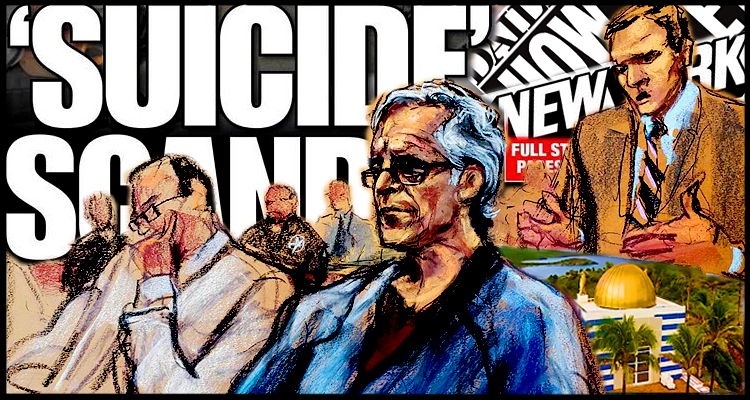 “For every complex problem there is an answer that is clear, simple, and wrong.” – H.L. Mencken

It was just over a month ago that Federal prosecutors held a nationally televised press conference to announce the arrest of financier Jeffrey Epstein and pleaded with the public for any information relevant to the case and for victims to come forward. Epstein was charged with sex trafficking of minors and there were accusations that he created a network to exploit dozens of underage girls for his own pleasure and had an extensive rolodex of powerbrokers, celebrities, politicians, and world leaders from around the globe. One day prior to his death, the biggest bombshell to date was the release of newly unsealed documents from a lawsuit by one of Epstein’s accusers.

We live in an era ripe with conspiracy theories of all kinds. The modern Internet has made it possible to collect “facts” about everything you can think of, from flat earth cultists to moon landings that were faked and Clinton body counts. Even local government and D.C. politicos have joined the current conspiratorial cry surrounding the alleged suicide of Epstein and want to know how he could die in highly-secure confinement, which is reserved for the most high-profile inmates and protective custody situations.

Epstein Taken Off Suicide Watch Shortly Before His Death… “Less than three weeks ago, officials at New York’s Metropolitan Correctional Center (MCC) found Jeffrey Epstein in his prison cell with neck injuries that appeared consistent with a suicide attempt or assault. Therefore, the wealthy financier was put on suicide watch. But Epstein was then taken off suicide watch a few days ago and was being held in a cell alone with officials still uncertain about the source of his earlier injuries. Why Epstein was taken off suicide watch remains unclear, and it has quickly become one of the main questions surrounding the financier’s death by apparent suicide on Saturday. The Associated Press reports that Epstein was taken off suicide watch at the end of July while NBC News reports it happened sometime in the last two weeks. CNN reports that psychologists with the Federal Bureau of Prisons were the ones in charge of taking him off suicide watch.” – Slate, Aug. 10 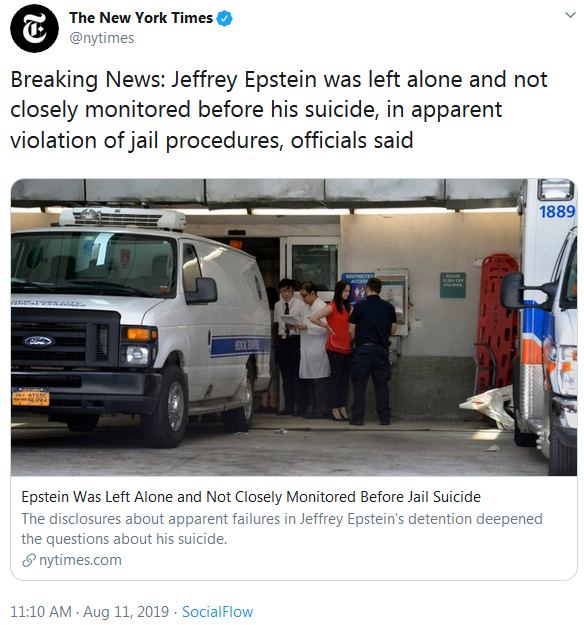 What is lost in the conspiratorialist rush to demonize every outside factor is that Epstein was not the first high-profile prisoner to be murdered or commit suicide in a high-security prison. Mobster Louis Turra hung himself in 1980 at the MCC and embarrassed everyone by committing the act within the psychiatric unit. Turra is a perfect example of a criminal case where evidence against a defendant was insurmountable and a guilt-ridden criminal mind found a way to end it. The Assistant U.S. Attorney at the time was Robert Gordon, who said “I guess he was unable to face the prospect of spending the rest of his life in jail.”

The same realization likely plagued Epstein in solitary confinement, as his lawyers were unable to secure bail for home arrest and allow him to return to living the good life he was accustomed to as a multi-millionaire. He likely felt the weight of an assured conviction after thousands of pages of damning court documents were unsealed the day before his death. If you were unfortunate enough to find yourself in a similar situation, how would you feel and what would you do? Everyone has an opinion, but one never truly knows until the reaper actually knocks on your door.

“He was too blown up. The damage that unit (MCC) can do to someone. It is as if you are an animal and you have been brought into a kennel. A guy like Jeffrey, it’s like, ‘Holy sh-t.’ I told my parents not to come there. God was not in the building. I have had some heavy incidents in the building. What happened is permanent. Some of the guards are on a major power trip. They know guys there are suffering. They know something the rest of the world has not seen, that a place like this exists in this country, and they get off on it. If the guards see that the guy is breaking, they’re going to help you break.” – New York Post, Aug. 10 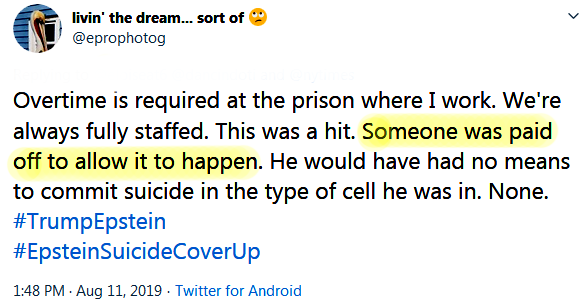 I suspect the answer to this tragedy is much less conspiratorial than the media and public are running with, and the hype associated with “conspiracy theory” terminology created by the CIA is obvious in this particular set of circumstances. It could be that a guard, one of his lawyers that hired their own defense attorney, or an unsuspected fall guy was paid, promised, or provided some type of information of value to provide the means. It could be as simple as a shoestring or whatever would work that enabled Epstein to end his own life rather than face the consequences of his disgusting legacy.

What will be the financial fallout due to his web of Wall Street ties remains a mystery.

“The definition of genius is taking the complex and making it simple.” – Albert Einstein

Everyone Is A Conspiracy Theorist After Epstein, Fake News Has Become Blatant – Timcast on YouTube