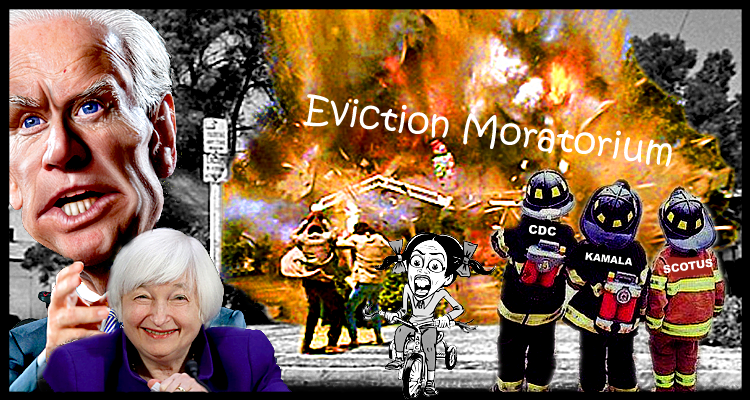 Three days after the Center for Disease Control’s (CDC) moratorium on evictions was allowed to lapse, Joe Biden, Kamala’s dysfunctional office in crisis, the administration’s bureaucracy, and the socialist cohorts littering Capitol Hill blatantly defied a Supreme Court (SCOTUS) ruling and conspired the issuance of an illegal eviction moratorium extension for 60 days. Unbeknownst to many, the diaspora induced housing boom has entered its twighlight phase as home sales recently plunged back to pandemic lows, but we’re not going there today.

Janet Yellen even donned a pair of rose-colored glasses with her statement on emergency rental assistance disbursements by eliminating some regulatory red tape, and on the other hand, she is in freakout mode over the lack of legislation to resolve a potential default on U.S. sovereign debt obligations. That took place after your elected congressional folks bugged out for a lengthy late-summer vacation as millions of plebes work to keep food on the table while toiling through pandemic flip-flop edicts.

“The U.S. Centers for Disease Control (CDC) is issuing a new order temporarily halting evictions in counties with heightened levels of community transmission in order to respond to recent, unexpected developments in the trajectory of the COVID-19 pandemic, including the rise of the Delta variant. It is intended to target specific areas of the country where cases are rapidly increasing, which likely would be exacerbated by mass evictions… Accordingly, subject to the limitations under ‘Applicability,’ a landlord, owner of a residential property, or other person with a legal right to pursue eviction or possessory action, shall not evict any covered person from any residential property in any county or U.S. territory while the county or territory is experiencing substantial or high levels of community transmission of SARS-CoV-2… This Order will expire on October 3, 2021, but is subject to further extension, modification, or rescission based on public health circumstances.” – CDC, Aug. 3

Penalties for landlord non-compliance are substantial, and it’s unclear how the unelected officialdom at the CDC acquired an enforcement authority when their edicts are not written into law and legislated by Congress.

What is likely the beginning of countless legal challenges to emerge from the real estate industry is an injunction request filed in the Washington, D.C. district court.

Landlords, Real Estate Groups Ask Judge to Block CDC’s New Eviction Moratorium… “Landlords, real-estate companies, and property-management groups, including the Alabama Association of Realtors and its counterpart in Georgia, argued in their emergency motion that the latest eviction order issued by the Biden administration’s CDC, exceeds the agency’s powers, according to a statement from the National Association of Realtors (NAR)… to halt the new protections, citing the U.S. Supreme Court’s recent order that the CDC could not extend the moratorium without new legislation. The NAR said in its statement that roughly half of all housing providers ‘are mom-and-pop operators’ and without rental income, ‘they cannot pay their own bills or maintain their properties.’” – Epoch Times

“The eviction moratoriums really hurt normal people who own property —they still have payments on the properties and will be forced to sell. BlackRock and Co will scoop them up cheap. And then consolidate, and raise rents. Lefties — this not the class warfare win you think it is.” – Kyle Kashuv

“I own two condos in Chicago’s River North. Both tenants have not paid rent since May/June 2020—both have been GAINFULLY employed during the pandemic. I can’t sell. I can’t evict. I send letters demanding payment of rent due—and I’m accused of harassment. I’m screwed.” – Kathy Smith

Wall Street Firms Are Buying Up Single-Family Homes… “According to John Burns Real Estate Consulting, in the first three months of this year, nearly a quarter of all homes sold in the United States were going to investors. That’s a broad umbrella that covers everything from mega institutions to individuals buying vacation homes, but BlackRock, JPMorgan Chase and Goldman Sachs were among the big-name buyers.” – Paine.TV

The first issue to consider is that the SCOTUS ruled that an extension was illegal. That alone eviscerates the legal arguments put forward by the order’s author(s). That was clearly unconstitutional, and reeks of the indirect confiscation of property and Cool Hand Luke’s version of a failure to communicate along Pennsylvania Avenue.

The Eviction Moratorium Is a Sitting Duck… “Dithering Democrats have left vulnerable renters in the worst possible place… In short, the SCOTUS effectively gave Biden and Congress just over one month to fix the disbursement of rental assistance funds and/or to reimpose the moratorium through new legislation. They did neither. The White House, for its part, did not put pressure on Congress until right before the moratorium expired and right before the House was set to leave town for its annual August recess… ‘The reason why the Biden administration cannot extend the moratorium by invoking the CDC’s statutory authority is that the Court was quite clear that it would not permit such an extension.’” – New Republic

Secondly, and without getting lost in the experimental and data rabbit holes for brevity’s sake, if you read the dispatched “order” from the CDC, you’ll notice that all of their reasoning does not necessarily represent settled science or recent reporting in the U.S. and abroad.

“Three COVID-19 vaccines are currently authorized by the FDA for emergency use: two mRNA vaccines and one viral vector vaccine, each of which has been determined to be safe and effective against COVID-19… This Order is a temporary eviction moratorium to prevent the further spread of COVID-19.” – CDC, Aug. 3

Note that the Emergency Use Authorization (EUA) status for current inoculation options was skimmed over and not clearly defined. The “safe and effective” narrative is no longer a sound conclusion and underscores their astonishing hubris when considering the inhumane lack of informed consent (a must-read and its ongoing Twitter thread) before allowing a jab, the paucity of information provided for alternative treatments (pdf), the enormous level of serious adverse reactions and deaths in the U.S. alone, and medical authorities and local clot-shot locations are not communicating basics in a majority of circumstances if you simply inquire with your circle of friends or family.

Few are aware that as of May 1, the CDC is no longer monitoring vaccine breakthrough cases and only identifying hospitalized or fatal cases, which skews the reported U.S. data points, and the plebes are getting less that can help identify warning signals. As it turns out, foreign data from populations with the highest jab rates in the world indicate that all is not sweet with Kool-Aid supplied by mainstream media presstitutes. Note that the following examples in Israel include publicly available data points prior to July 29 before Israel’s Health Ministry expressed its intention to no longer provide a breakdown of hospitalizations and deaths by vaccination status. 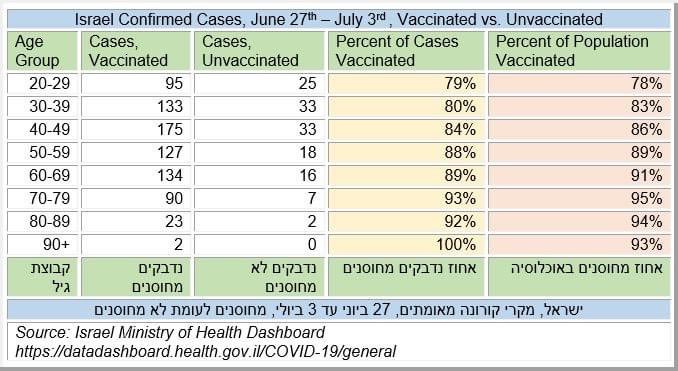 “Natural infection vs vaccination: Which gives more protection?… “Nearly 40% of new COVID patients were vaccinated – compared to just 1% who had been infected previously. Patients who recovered from the virus were far less likely to become infected during the latest wave of the pandemic than people who were vaccinated against COVID, according to numbers presented to the Israeli Health Ministry. Health Ministry data on the wave of COVID outbreaks which began this May show that Israelis with immunity from natural infection were far less likely to become infected again in comparison to Israelis who only had immunity via vaccination… The disparity has confounded – and divided – Health Ministry experts.” – Arutz Sheva 7, July 13

Is the drug deadlier than the disease?… “Israel’s nine million people, and Gibraltar’s 34,000, are among the most Covid-19 vaccinated in the world, almost entirely using the Pfizer mRNA injection.  But after a fall in cases, both communities are now once again seeing a rapid rise in infections.” – TCW, July 30 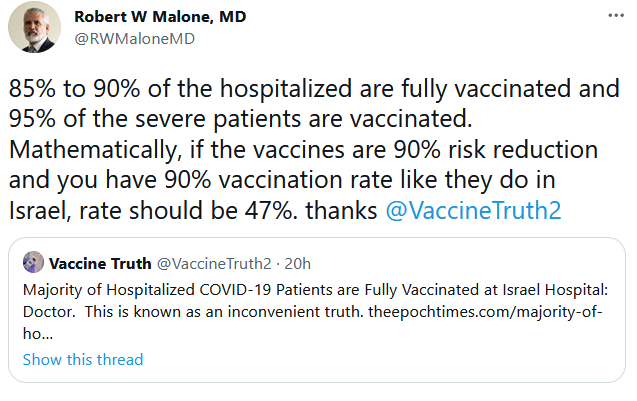 U.S. 86% of Youth Getting First Pfizer COVID-19 Shot Experienced Adverse Reactions According to FDA Data… “On May 10, the FDA granted a EUA for Pfizer’s mRNA COVID-19 vaccine for folks aged 12 and up. Pfizer’s clinical trials on 12-15 years old showed that 86% of subjects had an adverse response from mild to serious.” – TrialSiteNews, Aug. 5

We have no worries because the Department of Justice expressed an opinion that mandating a medical experiment on the U.S. population is just fine and the Nuremberg Code is a cancel-culture victim. Politico Dr. Peter Navarro has described the current situation as “the authoritarianism does not match up with the science,” and Dr. Robert Malone is the inventor of the mRNA vaccine platform who said the following:

“Now the government that’s been promoting this noble lie strategy where the vaccines are perfect, they have no adverse events, they can get us to herd immunity, all of that has be known to be false. Now they got to confront the fact they’ve been caught in a lie.”

Signals that indicate that a potential for ADE brewing would be enough to provide relief to renters and landlords alike, but we have a problem on our hands when it’s executed like a dictatorship via an edict and outside of checks and balances. What else do you expect from a planned Great Reset that wants subservience and “you will own nothing and be happy about it.” Power-drunk tyrannicals are running the big show with an abuse of power, which explains Pelosi’s statement and the following example emanating from Biden’s cohorts on Capitol Hill that ignored the SCOTUS. 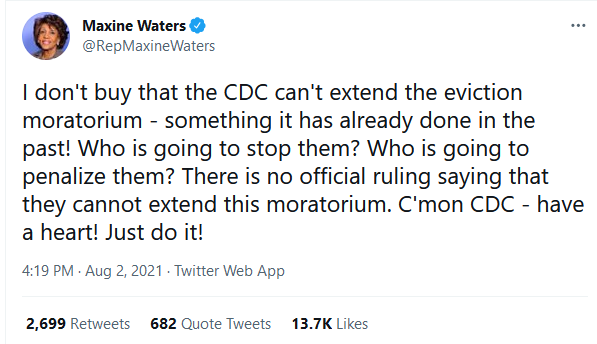 Before closing up shop tonight, here is the latest public service announcement from the sanitarium to scrutinize. 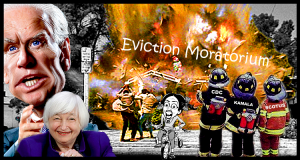