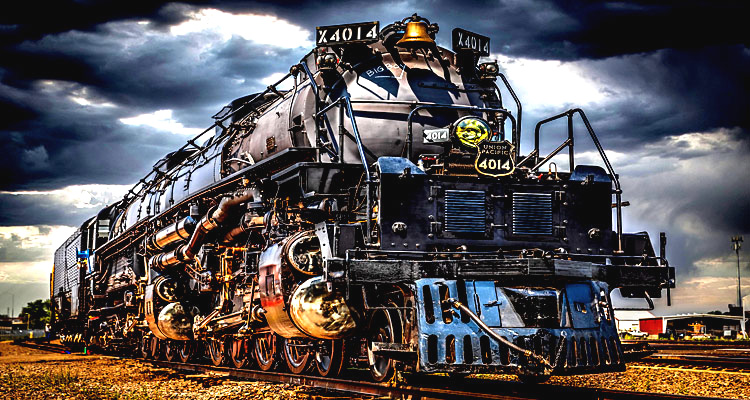 Political gaslighting “is fast becoming the defining feature of our times.” Psychologists refer to it as a specific form of manipulation where the manipulator tries to get someone or a group of people to question their own reality, memory, or perception. The manipulator holds enough power to terrify their target because the threat of losing the relationship or social construct is viewed as less important than who they want to be seen as. It’s a twisted behavior that’s been rearing its ugly head with more regularity on Capitol Hill in recent years. When applied to the threat of a nationwide railroad strike by working-class union members, politicians claimed loyalty to labor on the campaign trail instead of pressure from big business, then betrayed their constituents to retain power, control, and fulfill their fascist-socialist agenda. Promises made by elected politicos were unrealistic to begin with, and the plebes must eventually pay for the repetitive lack of due diligence at the voting booth.

Here is an excerpt from the “Mississippi River Runs Dry and a Potential Railroad Strike Looms” published in mid-October:

“Adding to supply chain worries in the U.S., the threat of a union railroad strike is not over despite efforts by the Biden administration to negotiate a deal since mid-September. Logistic managers are getting plans ready for a strike in November that would cause unprecedented havoc and cost the U.S. economy roughly $2 billion per day. Shipments that require multiple modes of transportation that include freight rail, the ocean, and trucking can have a week’s delay from when cargo is picked up and it makes it onto rail lines, so a lot of contingency planning is required to redirect freight. The National Carriers’ Conference Committee (NCCC) notified the Brotherhood of Maintenance of Way Employees Division of the International Brotherhood of Teamsters (BMWED) that the union’s latest offer was rejected. Congress has the ability to impose a resolution provided by the Presidential Emergency Board (PEB), but railroad employees could still strike as early as November 19. The BMWED spokesperson is quoted as saying ‘the railroads consistently underestimate the frustration and anger of the workers. Workers can’t take it anymore.’” – TraderStef, Oct. 22

Railroads, unions draw their lines in sand as Biden, Congress move to prevent strike… “The National Railway Labor Conference and the BMWED are drawing their lines in the sand after President Joe Biden called on Congress to pass legislation that would enforce the tentative rail labor agreement. In a statement, the BMWED said pressuring Congress to pass legislation does not fix the problems or concerns of their workers. ‘It both denies railroad workers their right to strike while also denying them of the benefit they would likely otherwise obtain if they were not denied their right to strike,’ the statement says. ‘Additionally, passing legislation to adopt tentative agreements that exclude paid sick leave for railroad workers will not address rail service issues. Rather, it will worsen supply chain issues and further sicken, infuriate, and disenfranchise railroad workers as they continue shouldering the burdens of the railroads’ mismanagement.’” – CNBC, Nov. 29

A defining moment in U.S. labor history was the Railroad Strike of 1877 that brought the nationwide railroad network to a standstill that summer. At least 100,000 rail workers spontaneously protested over poor pay and working conditions in a massive uprising that ended violently. There was no national railroad union representation and only job-specific brotherhoods at the time. Railroad companies and local politicians ended the strike by hiring militias to attack protesters, which resulted in roughly 1,000 arrests and 100 deaths. Workers won some small gains by striking or threatening to strike on the local level, but protests didn’t lead to a nationwide victory. The strike led to an increased presence of local militias in U.S. working-class towns that eventually became the National Guard and its armories. 20 years later, the first major railroad union emerged as the American Railway Union, which played a pivotal role in the 1894 Pullman Strike that marked a turning point in national labor organizing. 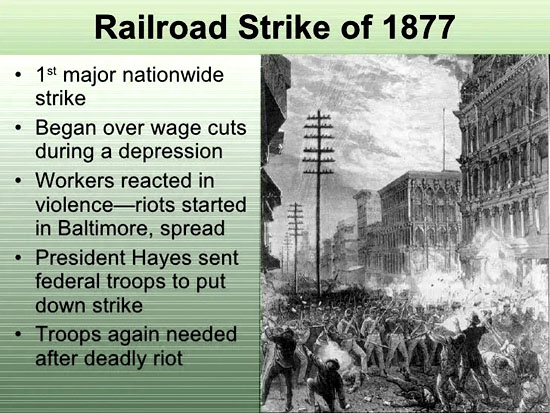 Biden Punts Possible Devastating Rail Strike Dilemma to Congress to Solve… “President Biden said in a statement: ‘As a proud pro-labor President, I am reluctant to override the ratification procedures and the views of those who voted against the agreement. But in this case – where the economic impact of a shutdown would hurt millions of other working people and families – I believe Congress must use its powers to adopt this deal.’ Speaker Pelosi added that ‘as we consider congressional action, we must recognize that railroads have been selling out to Wall Street to boost their bottom lines, making obscene profits.’” – Political Insider, Nov. 29

Dear Colleague on the Tentative Agreement with Railroaders… “Proudly, we have long stood with the hard-working railroaders in their fight against greedy railroad corporations for fairer wages, benefits and working conditions. And it is outrageous that every developed country in the world has paid sick leave, yet America does not. It is with great reluctance that we must now move to bypass the standard ratification process for the Tentative Agreement. However, we must act to prevent a catastrophic strike that would touch the lives of nearly every family: erasing hundreds of thousands of jobs, including union jobs; keeping food and medicine off the shelves; and stopping small businesses from getting their goods to market.” – Speaker of The House Nancy Pelosi, Nov. 29

If no agreement is reached by Dec. 9, 2022, or Congress doesn’t intervene, a coordinated strike will commence. Unions that voted for ratification have confirmed that they won’t cross picket lines and will support fellow union workers, which would result in a nationwide freight-rail shutdown. The largest rail union along with three others represent over 100,000 union members who voted against Biden’s government-moderated deal, and the remaining eight voted to ratify.

This afternoon, House lawmakers voted 290 to 137 to force the adoption of the government deal that failed to get the required approval from all railroad unions. Additionally, the House passed a separate bill that adds seven days of paid sick leave to hopefully remove a key bargaining roadblock between the unions and the railroad industry. Nancy Pelosi cited the Railway Labor Act of 1926 that allows Congress to intervene in railroad disputes that threaten the U.S. economy. It must survive a vote in the Senate within a few days, but members on both sides of the aisle are threatening roadblocks to delay it.

Sen. Marco Rubio slams Biden’s shutting down a rail strike for workers who want more paid sick leave… “Michael Paul Lindsey, a locomotive engineer in Idaho and steering committee member for Railroad Workers United, told Insider it was a ‘blatant betrayal’ but he wasn’t surprised. ‘I thought it was kind of laughable that anyone would think that either the Democrats or the Republicans actually cared. Bottom line, they care about money,’ he said. Even so, he added, ‘there was always that hope in the back of my mind that maybe someone would do something that was actually right for the American worker for once — instead of just what’s right for corporate America.’” – Business Insider, Nov. 29

According to federal safety measures, railroad carriers must begin prepping for a strike seven days before the strike date. With a nationwide strike slated for launch on December 9, the railroad industry has already begun to implement supply chain contingency plans. 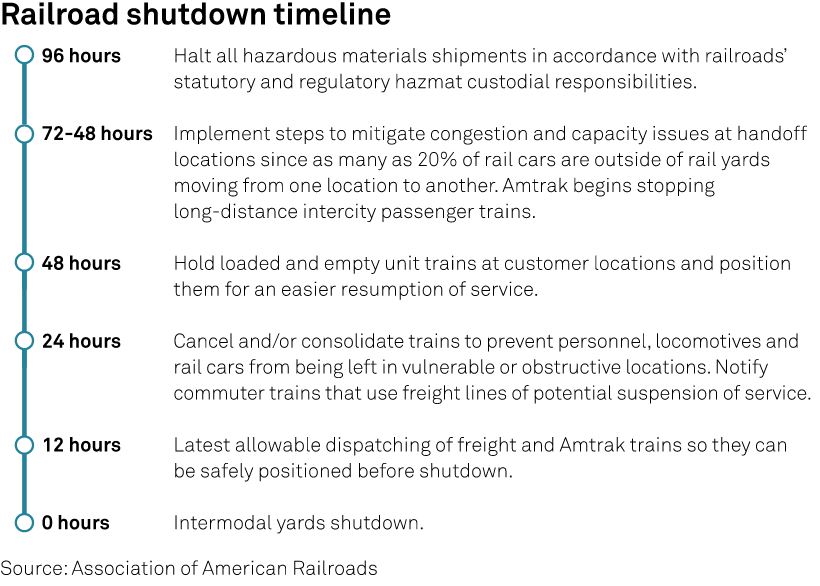 One example is ethanol, which is primarily transported by rail, and more than 90% of gasoline in the U.S. requires it. Transportation that’s needed to circumvent a railroad strike is extremely difficult or impossible to acquire due to the current truck driver shortage and multimodal logistics required for materials transported by rail. The Association of American Railroads (AAR) has said that 467,000 trucks and trailers would be needed to move the amount of rail-bound freight per day in the event of a strike. It’s estimated that for every day of a strike, it takes roughly five to seven days for that supply chain to catch up.

The world’s largest steam locomotive is today’s headline image, and its name is “Big Boy No. 4014.” Big Boy returned to the tracks and celebrated 160 years with Union Pacific last year. Pray for no railroad strike or violence. We have enough supply chain issues to contend with already. Enjoy the video! 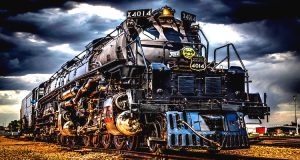