Are Auto Loan Defaults the Canary in the Coal Mine?

Take a look at the technical charts for gold this year and you come across one key impression: this is a market of stunted potential. For most of 2019’s first half, the precious metal largely lingered sideways. However, in the summer season, prices skyrocketed before going flat in the fall. However, one factor might spark the gold fear trade: auto loan defaults.

According to the Washington Post, a record seven million Americans are three months behind on their car payments. To put that into perspective, this is a bigger number than what we saw in the aftermath of the 2008 financial crisis. Rightfully, economists have sounded the alarm, warning that this is a red flag that deserves serious attention.

Obviously, the surge in auto loan defaults, along with distressed borrowers who will almost surely default represents a severe contrast. On one hand, President Trump has consistently bragged about his business acumen generating a robust economic recovery. And he has a point, at least on paper: unemployment is near all-time lows and equity market valuations have surged to absolute record highs.

But on the other hand, nothing truly epitomizes a genuine bull market than strong consumer sentiment (and actions). Thus, the existence of high levels of auto loan defaults is already problematic, let alone a rising trend.

So, what’s going on here?

Ignore Auto Loan Defaults at Your Own Peril

Some mainstream analysts have sought to explain the lift in auto loan defaults. While these explanations cover a few aspects of the crisis, they don’t cover all of them.

For instance, automakers – especially domestic ones – have given up on sedans and smaller vehicles. Instead, they’re focusing on SUVs and trucks, which tend to sell well among American families, particularly Millennials. Because these types of vehicles are more expensive, consumers are finding themselves stretching more than prior generations to acquire them.

However, I don’t believe these two factors explain the crux of the crisis. Although auto loan defaults should tick higher with an increased base, they shouldn’t tick nearly as high as they have. Why? Because we’re in a bull market, or at least that’s the message!

But if the message isn’t wrong, the only other reasonable explanation is that the economy is healthy…for the wealthy. In other words, the vaunted economic recovery is only for the privileged few. That translates to a widening wealth gap, something that doesn’t bode well for anybody, really.

Revolutions and wars have sparked for a lot less. 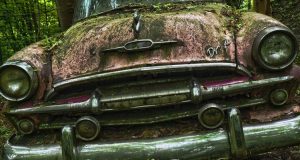