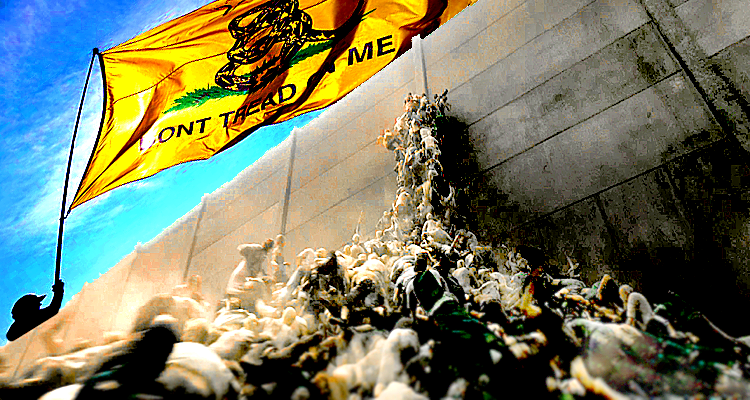 I knew that a wave of illegal immigration across the United States’ southern border would be huge when I penned Part 1 in February of 2021 following Biden’s presidential inauguration, but the unrestrictive policy implemented by the Biden administration has produced record numbers that exceeded any expectation. Mark Perry from the American Enterprise Institute predicts the total number of migrants crossing into the U.S. under Biden’s tenure could easily reach 12 million, although data thus far points to 9.7 million and equates to the population of New Jersey. Here is an excerpt and article reference from Part 1:

“A major accomplishment of the Trump administration was securing the U.S. border by imposing order with existing laws. The immigration and border policies that were implemented are only one achievement within a lengthy summary located in the White House online archive. I suggest you review that document if you did not have the opportunity or did not know it was there. You may also want to peruse my article titled ‘The Natives are Restless for Birthright Jurisprudence – Don’t Tread On Me,’ published in Nov. 2018, which covered the previous immigration crisis and a historical perspective on how the ‘Don’t Tread On Me’ motto came to be. It’s stunning how Biden is focused on abolishing so many achievements with a stroke of his pen across an unprecedented 52 executive orders and actions in less than three weeks of occupying the White House.” – TraderStef

Fiscal year 2022 clocked in with more than 2.76 million illegal crossings reported by federal authorities, which shattered previous records, and an additional 600,000 “gotaways” (vs. 389,155 in FY2021 and 69,000 in FY2020) who evaded Customs and Border Protection (CBP enforcement statistics). Evasions numbered roughly 50,000 per month at more than 1,500 per day and were detected by sensors, cameras, or other means but never encountered or apprehended due to the lack of manpower and enforcement policy. 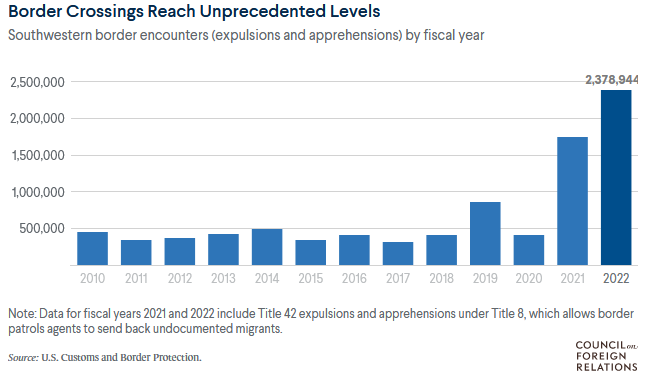 An Associated Press investigation at the southern border this past summer found that the flood of migrants is from at least 115 countries, which includes (ICE data) terrorists, drug cartels and MS-13 gang members, and migrants are seen climbing out of sewer manholes in downtown El Paso. The overwhelming fiscal situation for southern border cities and nearby states was suppressed by legacy media until governors in the south began shipping illegal immigrants to the doorstep of politicians and into metropolitan areas that claim to be sanctuary cities. A poll by Rasmussen Reports in mid-September found that 52% of voters approved Texas Gov. Greg Abbott’s program to bus illegal immigrants to cities like Washington, D.C., Chicago, Denver, and New York City. Democrats from the president to the governors and mayors all encourage illegal immigration and then try to pass the buck onto cities and states outside of their own.

DC mayor declares public emergency… Washington, D.C. Mayor Muriel Bowser declared a public health emergency on Thursday in response to the thousands of migrants arriving in the nation’s capital by bus from Arizona and Texas… ‘This will include a program to meet all buses, and given that most people will move on, our primary focus is to make sure we have a humane, efficient, welcome process that will allow people to move on to their final destination.’” – CNN Politics, Sep. 8

Another busload of migrants dropped off at Kamala Harris’ DC home… “Dozens of migrants were bused from Texas to DC and deposited on the doorstep of border czar and Vice President Kamala Harris on Wednesday morning… NBC News’ Gary Grumbach tweeted that the new arrivals — among them young children — were immediately met by volunteers from the humanitarian organization SAMU First Response who assessed their needs and found out their travel plans, before loading them into vans headed for the organization’s headquarters.” – NYPost, Dec. 7

Denver Mayor Declares Emergency Amid Influx Of Illegal Immigrants… “Mayor Michael Hancock, a Democrat, issued the declaration as several hundred illegal aliens, mostly from Central and South America, have arrived in the state in just the past few days alone… ‘Let me be frank: This influx of migrants, the unanticipated nature of their arrival, and our current space and staffing challenges have put an immense strain on city resources to the level where they’re on the verge of reaching a breaking point at this time.’” – Epoch Times, Dec. 16

One event in particular that raised eyebrows and received national coverage was the blatant hypocrisy displayed at Martha’s Vineyard when Florida Gov. Ron DeSantis sent illegal immigrants from Venezuela to the most elitist liberal enclave in the U.S. with 17,000 residents. After only 50 were flown in, island officials called it a “humanitarian crisis” and begged for state and federal assistance to deal with it. Massachusetts called in the National Guard and promptly shipped the migrants from the swanky vineyard to the U.S. military’s Joint Base Cape Cod. 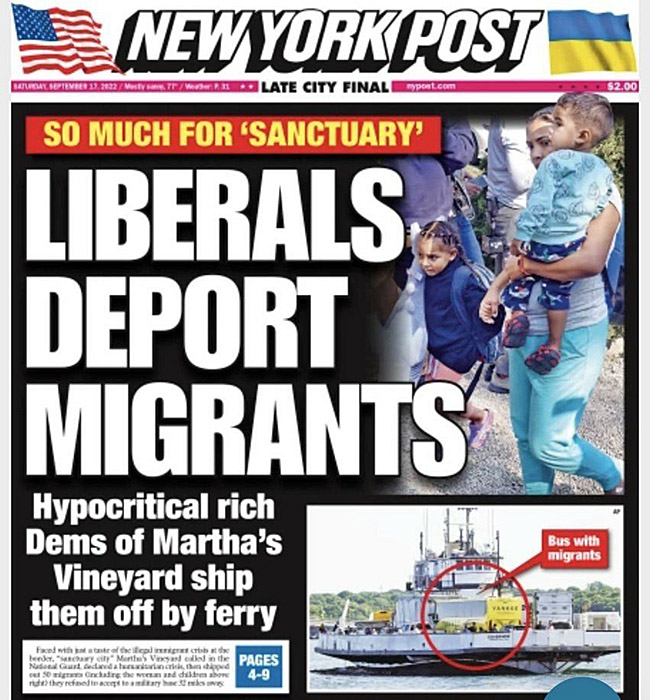 The Department of Homeland Security (DHS) has shifted its tone on border policy after the Supreme Court refused to abolish the Trump-era Title 42 policy. The DHS chief has made a public announcement claiming that “the border is not open” and only reiterates what the White House always claimed when confronted with its border policy failure vs. facts on the ground.

Supreme Court to hear Title 42 oral arguments March 1… “The Supreme Court temporarily halted the termination of Title 42 on Dec. 27, allowing the Trump-era policy to remain in place until the justices hear a challenge from Republican-led states. Oral arguments were originally intended to begin in February. The policy, which was originally enacted at the outset of the coronavirus pandemic in March 2020, allows immigration officials to quickly expel migrants on public health grounds.” – Fox News, Jan. 6, 2023

Now that New York City Mayor Eric Adams has said that there’s “no more room at the inn” when faced with accepting more migrants, perhaps the country will wake up from its wokeness on this issue and face the seriousness of the invasion at our border. Unfortunately, the majority of America’s mayors in the largest cities still think money will solve their problem. That will change when the criminals and destitute, and enraged constituents appear on their front doorstep to demand action from their apparatchik cohorts on Capitol Hill and the White House. 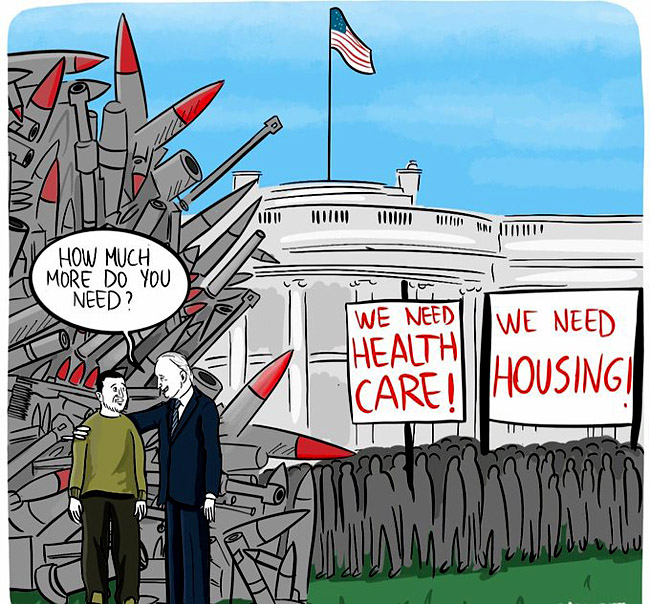 Sanctuary cities complain about ‘onslaught’ of illegal migrants — will they force Biden to do something?… “What the Biden administration has done in refusing to enforce immigration law is to pit these cities and states against each other, creating an ‘every city for itself’ atmosphere. While we can relish the hypocrisy of sanctuary mayors complaining about an ‘onslaught’ of migrants, Adams was right when he said ‘no city should have to make a decision if they’re going to provide for their citizens . . . or if they’re going to deal with an onslaught of migrants and asylum seekers.’ But the sanctuary mayors who acknowledge they’re facing a crisis of Washington’s making still can’t bring themselves to call for the real solution: immigration enforcement. Adams and his fellow sanctuary mayors still see this mainly as a budgetary problem. That’s what Adams meant when he said, ‘This is just unfair for local governments to have to take on this national obligation.’” – NYPost, Jan. 5, 2023 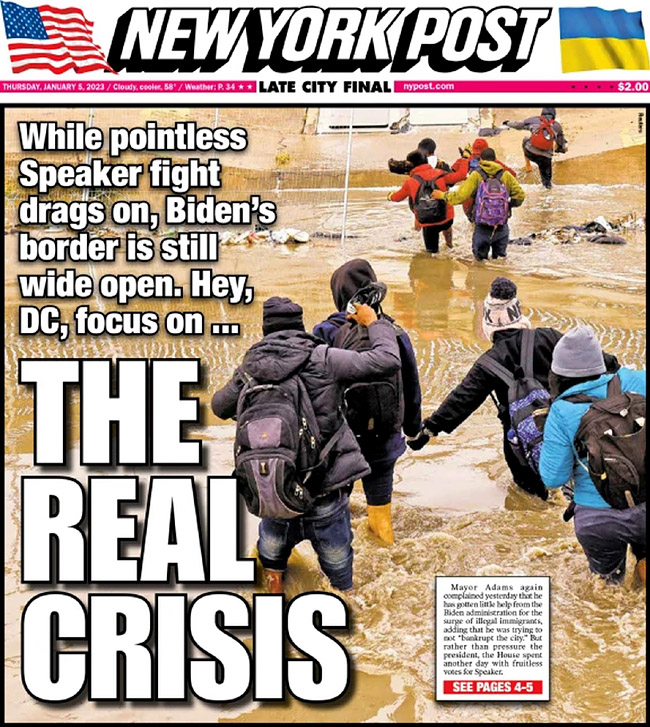 Why Are We Spending Millions Housing Illegal Migrants While Americans Go Homeless?… “The worst part about it is this crisis was totally preventable. The U.S. border crisis is not naturally occurring; extra demand for housing is not due to organic market forces. Instead, President Biden sent a signal to the world that the U.S. has no boundaries, and everybody heard it. Because of Biden, we’ve been forced to assume responsibility for sheltering, feeding, and monitoring millions more people.” – Newsweek, Dec. 2022

Metallica – Don’t Tread On Me 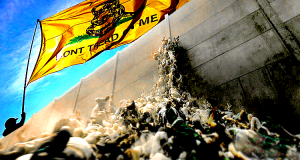