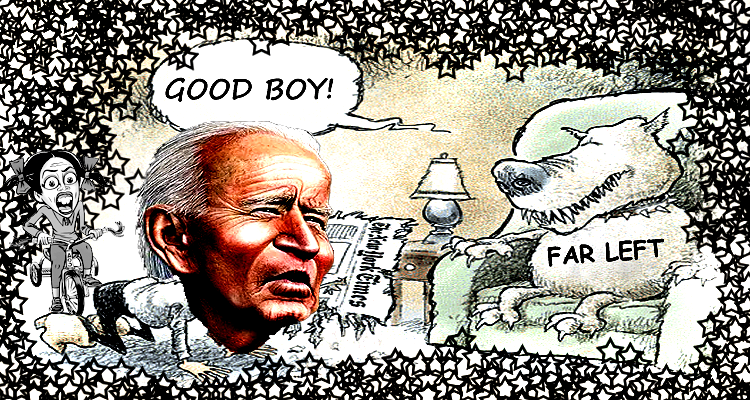 In 2017, the World Economic Forum (WEF) released a video to plant a seed that “you will own nothing and be happy” by 2030. It’s not a coincidence that in 2019, President Trump tweeted “they’re not after me they’re after you, I’m just in the way.” The United Nations “net zero” initiative and the far left “greenies” utopian dream want to eliminate oil and gas consumption at warp speed and Biden’s globalist mafia are determined to follow through with senseless policies that will destroy the United States economy and your socioeconomic freedom. They view you as a useless meatsack to be subjugated by a Great Reset of tyranny and transhumanism that will morph humanity into a Borg hive with a New Green Deal catastrophe that’s replete with A.I., predictive surveillance, a ministry of truth, pestilence, gene-modification, famine, economic depression, war, and fascistic feudalism. 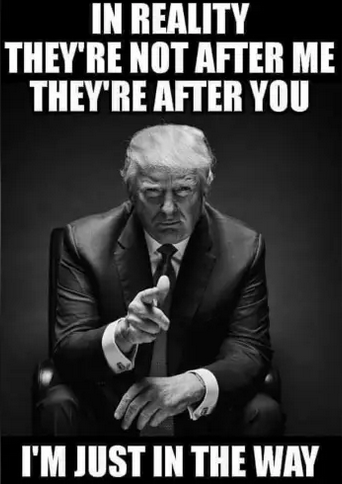 Food, Fuel, and Inflation Crises All Stem From Globalist Policies… “The global elites left Davos last week after grappling with solutions to the profound crises facing the world. They left as they arrived, unaware that the crises are entirely of their own making… The globalists pushing climate change policies tell us there is no choice if the planet is to be saved from catastrophe many decades if not centuries from now. What they don’t tell us is that their prophecies of doom are based on computer climate models, all of which have proven false to date… The globalists may believe that the world needs their new world order. But they also exemplify the adage that the road to hell is paved with good intentions.” – Epoch Times, May 31

“What to Do With All of These Useless People?” – Yuval Noah Harari

“Revolution will lead to fusion of our physical, digital and biological identity” – Klaus Schwab

There are numerous issues that fall under an umbrella in the current situation we find ourselves. Today’s focus is two of the most important variables that guarantee a majority of our liberties in the near term. The first is an immediate return to energy independence in the U.S., and the second is to block any gun control legislation that degrades our Constitution’s second amendment which provides personal security and tyranny insurance from government overreach.

Let’s start with Senator John Kennedy’s speech on the Senate floor regarding Biden’s energy policy. Not included in the following video is an interview where Kennedy says “gas is so expensive it’s cheaper to buy cocaine and run everywhere.”

It was only 18 months ago when Biden was sworn into office after campaigning on an energy policy that’s designed to drive oil and gas out of the U.S. by switching to solar, wind, and other renewable sources. He agreed with a CNN moderator during a presidential debate that he was willing to hurt people economically to get the U.S. off of oil and gas and there will be “no ability for the oil industry to continue to drill, period, ends.” Biden’s Soviet-born Comptroller of the Currency nominee said she wanted to bankrupt the oil companies. By the grace of God, she was overwhelmingly voted down for being too radical. Unfortunately, there are nefarious players behind the scenes among the largest oil and financial companies that are dissuading capital investment into oil and gas infrastructure.

On May 17, I published “A Diesel Fuel Shortage Storm on Top of Record High Prices” and noted the following:

“The crisis with oil and gasoline prices in the U.S. has grown much worse since I penned ‘The Inflationary Black Gold Rush at the Gas Pump’ Part 1, 2, and 3 from Feb. 2021 through Mar. 2022. Today’s focus is on diesel fuel that skyrocketed to an all-time high this year and warnings of diesel shortages that are slated to begin in the mid-Atlantic and Northeast regions of the U.S. within weeks. Disregard nonsensical narratives that emanate from the Biden administration that blame everything on Putin, Trump, oil companies, or the inability to mind-read challenges in the future. There is a lot of blame to go around and not limited to Biden’s destruction of U.S. energy independence that’s bleeding the strategic petroleum reserve (SPR). We have an out-of-control monetary policy at the Fed and fiscal mismanagement on Capitol Hill, a stagflationary global economy on the brink of recession, a pandemic mired by an experimental intervention that’s deadly, an ongoing supply chain crisis, and war in Ukraine due to inept national security policy with damaging rhetoric from both sides of the pond that’s increasing the fear of a nuclear exchange. When you add those factors to the unmitigated shutdown of six refineries in the U.S., the upcoming closure of a seventh, and only one new oil refinery built since 1977, it’s no wonder the potential for a diesel fuel shortage is on the horizon.”  – TraderStef

While the Biden administration blames inflation on anyone and everything but themselves, they’ve failed to lower the price of fuels after releasing a historic amount of oil from the SPR. Biden is reportedly fumbling over numerous schemes that would increase the national debt and leave the underlying supply and refining issue unresolved. His latest thought was gas “rebate cards” for taxpayers, but that idea failed due to the ongoing supply chain crisis that prohibits the timely acquisition of enough microchips for millions of debit cards. A Washington Post writer got that scoop: 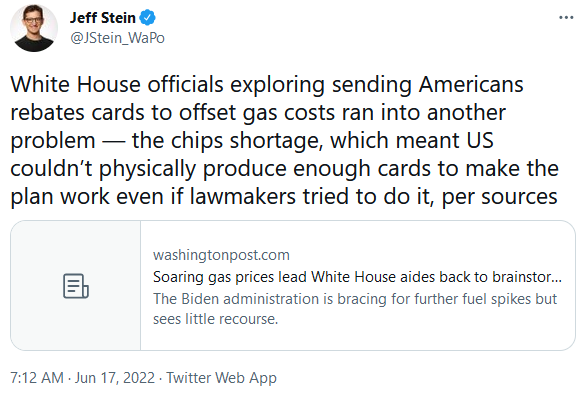 Biden and his democratic lawmakers have threatened oil CEOs with letters, a potential windfall tax, and invoking the Defense Production Act to get more diesel fuel and refined products downline to alleviate shortages around the country. He wants other countries to increase refining and production and hamstrings our own domestic companies, then threatens to nationalize operations in the U.S. if they don’t comply with his demands. Meanwhile, the average retail price for regular gasoline is sprinting past $5 per gallon. Biden mouthed-off that he wants to destroy the oil and gas industry, but the other side of his mouth is begging them to produce and invest more. So, which is it?

It’s an incompetent clown show that’s rarely called out by mainstream media presstitutes. In one rare moment of inconvenient truth, the ineptitude of greenies from the extreme faction were exposed by a GM spokesperson that had to be educated on where the electricity came from during an electric vehicle public relations stunt. Roughly 95% of ‘clean’ energy used to charge an EV in their Michigan town is sourced from COAL.

Companies will not invest in infrastructure if their product is slated to be phased out in the near future by a government. The Biden administration clearly doesn’t grasp or understand how businesses or the market functions, and is remarkably ignorant to the fact that the soaring price of energy makes the cost of pretty much everything else go up.

Exxon Mobil Fires Back at Biden: ‘Support US Resource Development’… “Longer term, government can promote investment through clear and consistent policy that supports U.S. resource development, such as regular and predictable lease sales, as well as streamlined regulatory approval and support for infrastructure such as pipelines… Biden’s attacks on the industry have created an uncertain environment that prevents investment.’” – NewsMax, Jun. 15

While on the topic of inflation, Biden has claimed that inflation in the U.S. is not as bad compared to some other countries and repeatedly blames President Putin of Russia for crossing into Ukraine in February of this year. The following chart shows the path of inflation for G7 countries since the spring of 2019. Notice how inflation began to pivot upwards right after the November 2020 presidential election. Biden is also clueless about the reality of a major recession setting in and stated today that a recession is not inevitable. I got news for him, it’s coming fast and will likely be a hard landing. 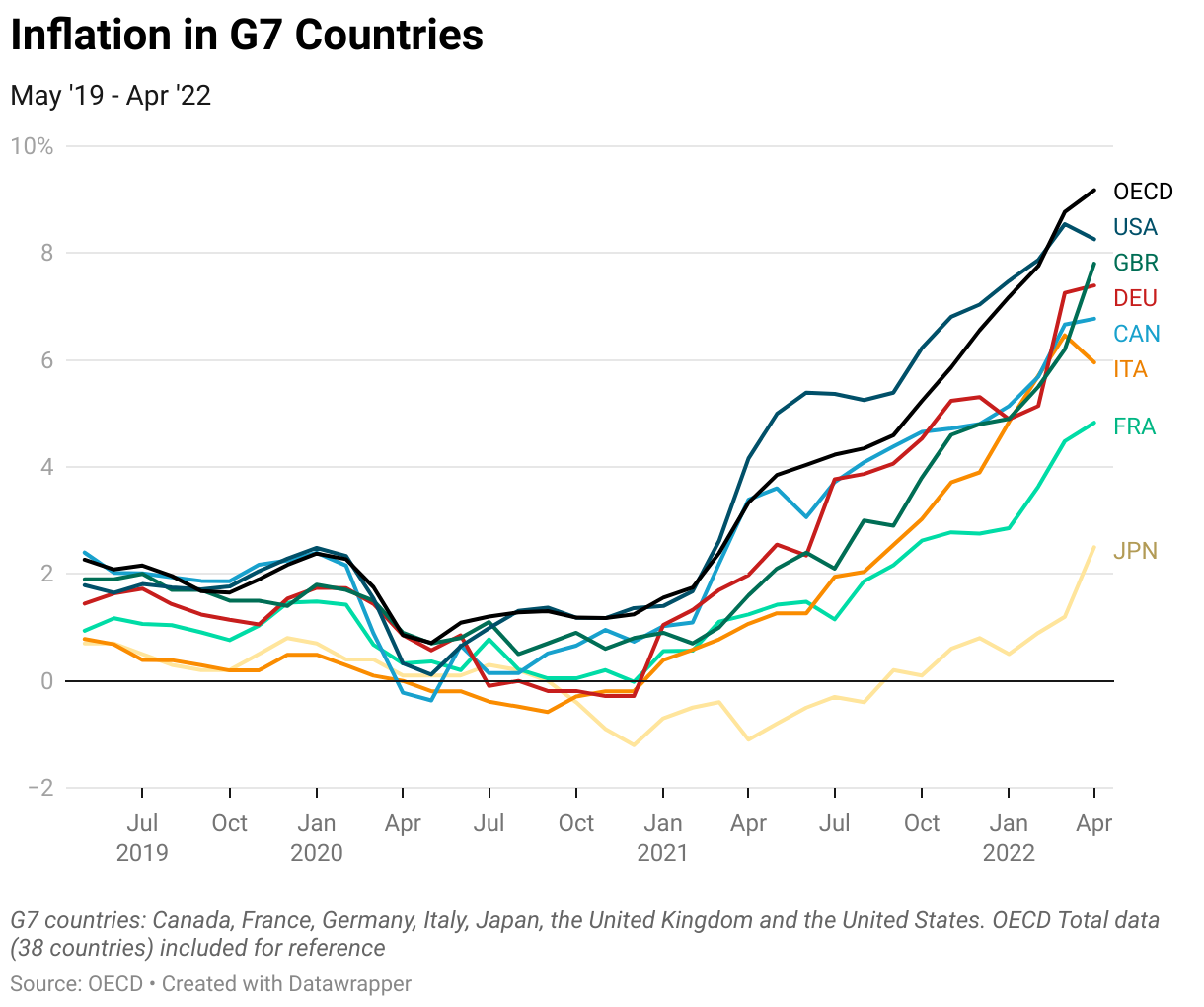 The entire western world has devolved into a dysfunctional mess and Putin is winning a dangerous game of chess. Perhaps he’s protecting the sovereignty of Russia and has no interest in the Great Reset agenda.

Putin: Previous world order won’t return… “The changes now happening are fundamental and irreversible, the Russian leader says. Those who believe that things will go back to the way they were before the outbreak of the conflict in Ukraine are wrong. ‘It is a mistake to suggest that the times of turbulent changes can be waited out and that things will return to normal; that everything will be as it was. It won’t,’ Putin insisted during his speech at the Saint Petersburg International Economic Forum (SPIEF) on Friday… It seems as if Washington refuses to see the new centers of power that have emerged in recent decades and which have every right to ‘protect their interests and ensure their national sovereignty,’ he said.” – RT, Jun. 17

The second point for discussion tonight is covered by Langley Outdoors Academy in “Gun Control vote in jeopardy… Senator Cornyn ‘frustrated’ and ‘not optimistic.’” 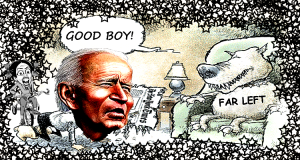