With Bitcoin prices now exceeding $11,000, and may soon hit $12,000, many of the granular details involving cryptocurrencies and the digital markets is lost. Naturally, both bulls and bears only have the price point in mind. While certainly understandable, the real opportunity is signaled through the declining Bitcoin dominance chart.

To those who are unfamiliar with the term, “Bitcoin dominance” simply means the ratio of Bitcoin’s market capitalization relative to all other cryptocurrencies. When the first blockchain asset was launched, Bitcoin dominance was of course 100%. Litecoin’s introduction dipped this perfect ratio, but not by any substantial magnitude.

From an 84% Bitcoin dominance, the rise of other cryptocurrencies, primarily Ethereum, sank the ratio to 65%. By the time the entirety of the blockchain community flexed its muscle, the ratio hit an all-time low of 37.8%. 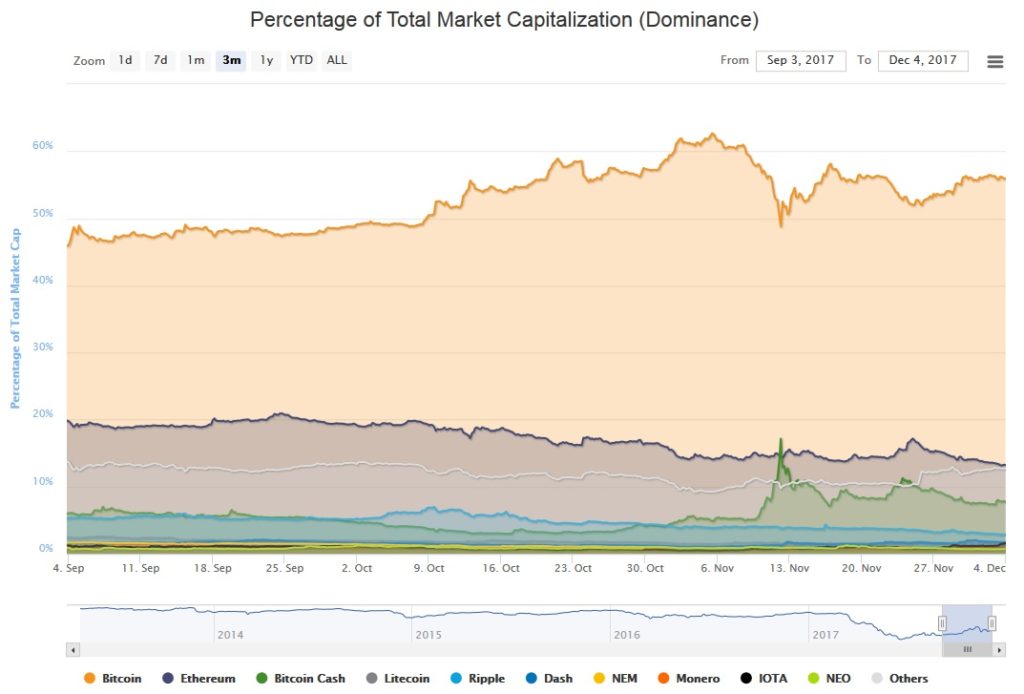 Currently, Bitcoin dominance stands at 56%. Recently, it hit a multi-month high of 62.5%. However, the days of one blockchain asset overwhelming all other cryptocurrencies combined is likely over. Perhaps, even Bitcoin enjoying majority market cap share is nearing the end. But to those that have an ominous feeling about this trend, fear not! This is exactly the golden opportunity that the blockchain and digital markets need.

First, no investment sector can survive if only one asset dictated terms. For much of the existence of the blockchain, Bitcoin dominance meant that whatever happens to Bitcoin, every digital token would follow suit. Wouldn’t it be great if each virtual currency traded on its own fundamentals? That won’t occur unless other cryptocurrencies take up more market share.

Second, a lower Bitcoin dominance is essential for Bitcoin’s success. That sounds counterintuitive. Normally, a company wants to dominate its core market. However, Bitcoin isn’t a publicly-traded firm. Its focus is on integration, not dominance. In other words, Bitcoin and the concept of the blockchain is so successful because it represents a better way — people want to engage Bitcoin, not be forced into it.

Thanks to the growing blockchain community, more cryptocurrencies are available to more people. As many of them become profitable, investors inevitably turn to the asset they trust the most within the digital markets — Bitcoin.

Thus, the king of cryptos’ share may be declining due to the increase in “competitors,” but because of their presence, that smaller share is a whole lot of pie!