Is Bitcoin Really in the Early Stages or Just Another Bull Trap?

Enthusiasm for bicoin is running sky-high, but can these digital markets continue to push even higher? That’s more than a fair question, especially in light of the meteoric rise in cryptocurrencies. For bitcoin, the king of cryptos has cleared the $2,300 mark. In just the trailing 30 day period, it has gained 84.5%. Surely, the bullish rally is exhausted?

Investors can use recent history as a clear warning against irrational optimism. In 2014, bitcoin returned nearly 180% for the year, even after gaining more than 2,180% in 2013. At the time, it appeared that bitcoin and cryptocurrencies could not be stopped. However, that assumption was laid to rest when valuations crumbled in 2015. For the first time since its launch, bitcoin went negative on an annual basis.

Of course, those that didn’t panic out enjoyed what can only be described as a market jubilee. At the trough of 2015, bitcoin stumbled to $177. Investors who got in at that time would pocket a monstrous 1,200% windfall.

But that was then. Can investors who are just waking up to the opportunity in cryptos and the digital markets profit from entering today?

Bitcoin enthusiasts will affirm that this is indeed the case. But let’s be real — a proponent of any market or industry would support the sector in question. And typically, prognostications that bitcoin is still “early in the game” result from gut feelings of prominent spokespersons. Their opinions may be valid but it’s difficult to determine this without a more quantitative basis.

If we’re being intellectually honest, the present bitcoin rally is a tough one to swallow. Maybe there are folks who thought about jumping on bitcoin when it cratered two years ago, but ultimately chose to not follow through. I’m sure they’re regretting that decision. Or, newcomers want to join but are fearful of a collapse — at $2,300, that is quite a bit of pocket change.

To be fair, the technical picture doesn’t assuage those concerns. Presently, the highs of this year are soaring well above this year’s average price point. This is an indication, though not a complete confirmation, that bitcoin’s price is getting ahead of itself. 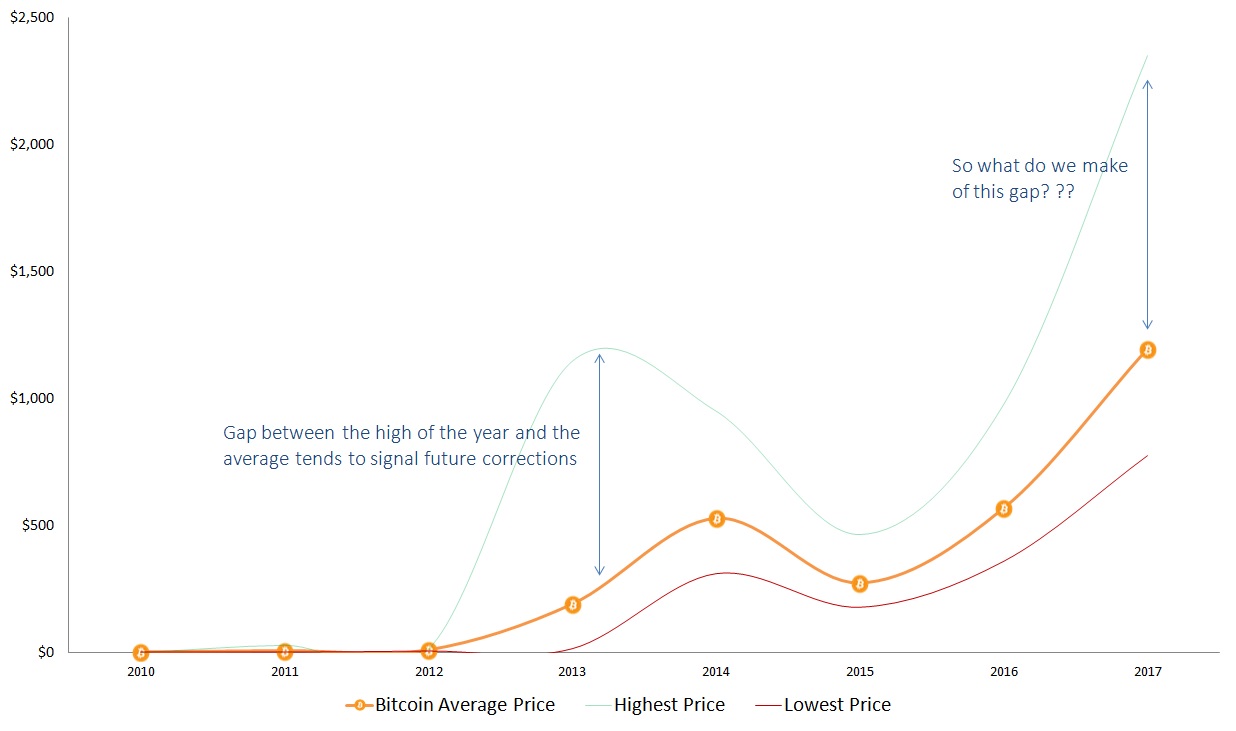 Between 2013 and 2014, we witnessed a similar dynamic. The high was nearly $1,150, whereas the average was a mere $189. Although bitcoin continued to trudge ahead, the digital markets were due for a correction, which came in 2015 as previously mentioned.

Are we headed towards yet another meltdown scenario? Should new investors wait before diving into bitcoin?

As you’ll see, the present market dynamic for bitcoin is incredibly deceiving…

Believe it or Not, the Reality is Far Different

The prior chart was built on an arithmetic basis. This simply tracks the nominal movement of bitcoin, unit by unit. But if we want to get an idea of the magnitude of bitcoin, we should consider its logarithmic chart. 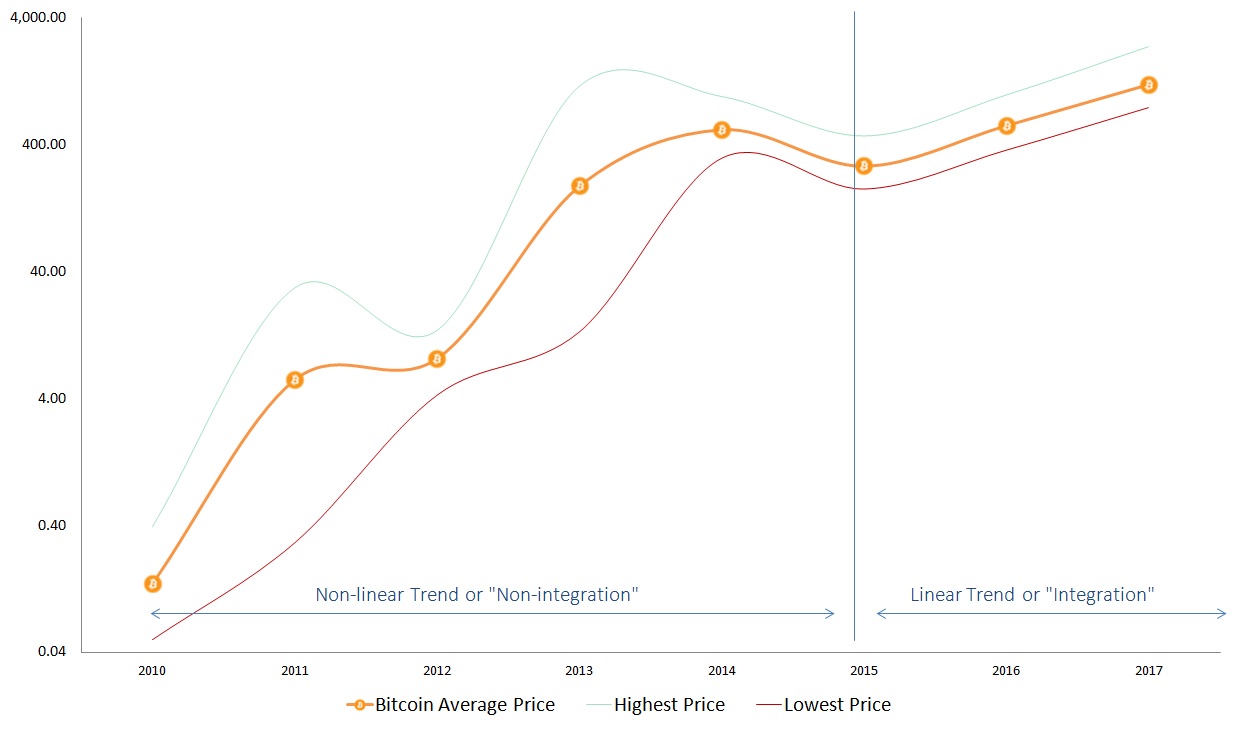 But from 2015 onwards, bitcoin has formed a near linear trend line. Additionally — and even more astounding — the average price is almost smack in the middle between its high and low range. Rather than a burst of speculation (as is suggested in the arithmetic chart), we see a controlled rise.

I have a theory why this is. During bitcoin’s initial run, this period could be classified as the “non-integration” phase. That is, few people recognized bitcoin outside of crypto enthusiasts. Thus, the digital markets were wild, characterized by low volume and speculative trading.

Later on, bitcoin enters into an integration phase. Cryptocurrencies became more widely known and, in the case of Japan and India, are accepted by international governing bodies. Trading settled down due to the increased volume, and less speculative activities.

More than 190 countries exist on Earth. Only a small handful have accepted bitcoin as a legitimate currency. Thus, the integration phase is where the bulk of the profitability could be made — which is a pretty amazing thought!