Bitcoin Is Entering the Next Phase: Stability!

One of the key criticisms against bitcoin and similar digital currencies is volatility. Contrary to traditional “paper” equity markets, bitcoin volatility is nothing short of extraordinary. Proponents will rightly argue that the choppiness is necessary to provide rich rewards for traders and speculators. Still, if bitcoin could be more stable valuation wise, it would take the next step towards full global acceptance.

With a time of writing price of under $2,500, bitcoin is again worrying both recent investors as well as hardened veterans. If traction doesn’t build quickly, it’s likely that the weak-hands will panic out of the cryptocurrency markets, thereby engendering a wider sellout. Should that occur, there’s no telling where the value of bitcoin would end up.

Fortunately, strong signs exist that confirm bitcoin’s maturity as a cryptocurrency asset. Indeed, the day when digital currencies are accepted as international legal tender is now more likely to be upon us than not.

Critics will often blindly criticize bitcoin as being too volatile of an investment. While that’s true, did you know that the average, week-over-week volatility in bitcoin is rising in your favor? 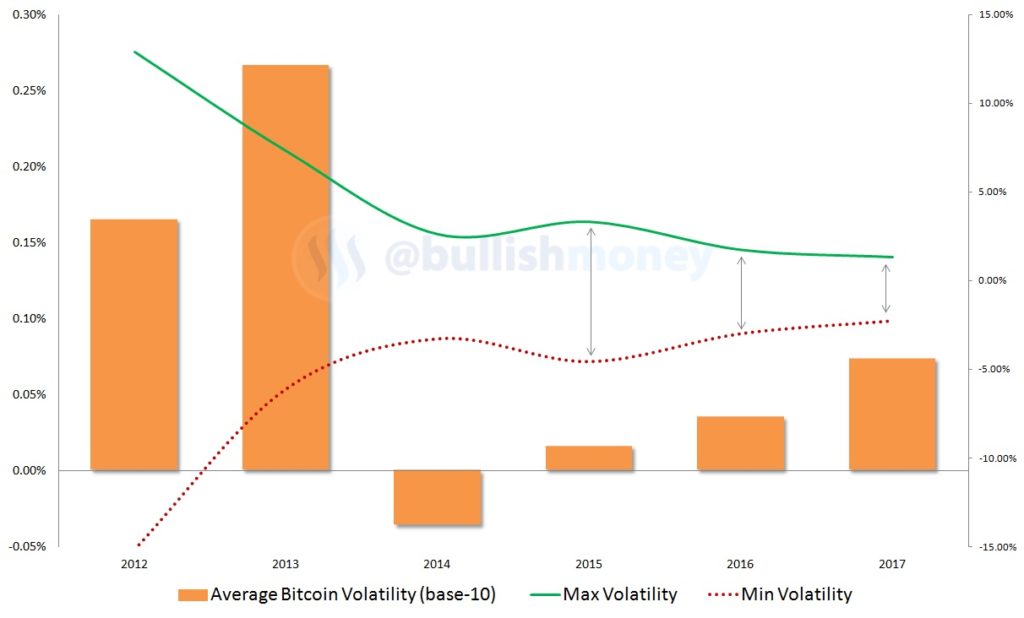 Since 2014, bitcoin’s weekly volatility (using a base-10 logarithmic chart) increased from a lowly -0.04% to the current, year-to-date rate of 0.07%. What that tells us is that bitcoin has a slight bullish edge, meaning that it’s more likely than not that your purchases this year are profitable.

During the early years of bitcoin and the cryptocurrency markets, it was not unusual for investors to see massive gains, only to be followed up by equally massive losses. While speculators live for this type of “opportunity cycles,” the regular Joe can be turned off by it.

Thankfully, bitcoin is becoming more stable to the downside. Based on its logarithmic weekly price data, the worst volatility this year was a -2.3% hit. Compare that to a -585% hit in 2011! You can clearly see that bitcoin is becoming a stable cryptocurrency platform.

Bitcoin got its start through extreme speculation, which is a big reason why the mainstream is talking about it today. However, that era is on the decline, and what is replacing it is a period of maturity.

We can determine this because the maximum and minimum volatility of bitcoin is becoming increasingly tighter over the past few years. This implies that we will enjoy modest gains as well as modest corrections, and thereby, eliminate the circus act that turned off early investors.