August 1, 2017 was hyped as ground zero for cryptocurrency advocates. For months, bitcoin advocates debated fiercely over the future trajectory of the digital coin. Failing to reach a negotiation on the scaling problem of bitcoin, the original blockchain asset split into two currencies — bitcoin and bitcoin cash.

Immediately, the newly-minted cryptocurrency soared in value, at one point hitting a high of nearly $757. At its peak, bitcoin cash was firmly ranked as the number three blockchain asset in terms of market capitalization. In turn, the original bitcoin shed several percentage points, suggesting a town that wasn’t big enough for the both of them.

However, at time of writing, bitcoin has just broken an all-time record high. Breaching the $3,000 level, then quickly taking out $3,100, the undisputed cryptocurrency king reaffirmed its dominance. In sharp contrast, bitcoin cash is currently trading hands at $262, nearly 53% below its opening price.

Personally, I never liked the idea of a bitcoin hardfork. Plenty of room exists for new innovations — why sully a perfectly good platform for those that wanted to keep it pure? Fortunately, the markets are seemingly in agreement with me.

Here are three takeaway points you should consider: 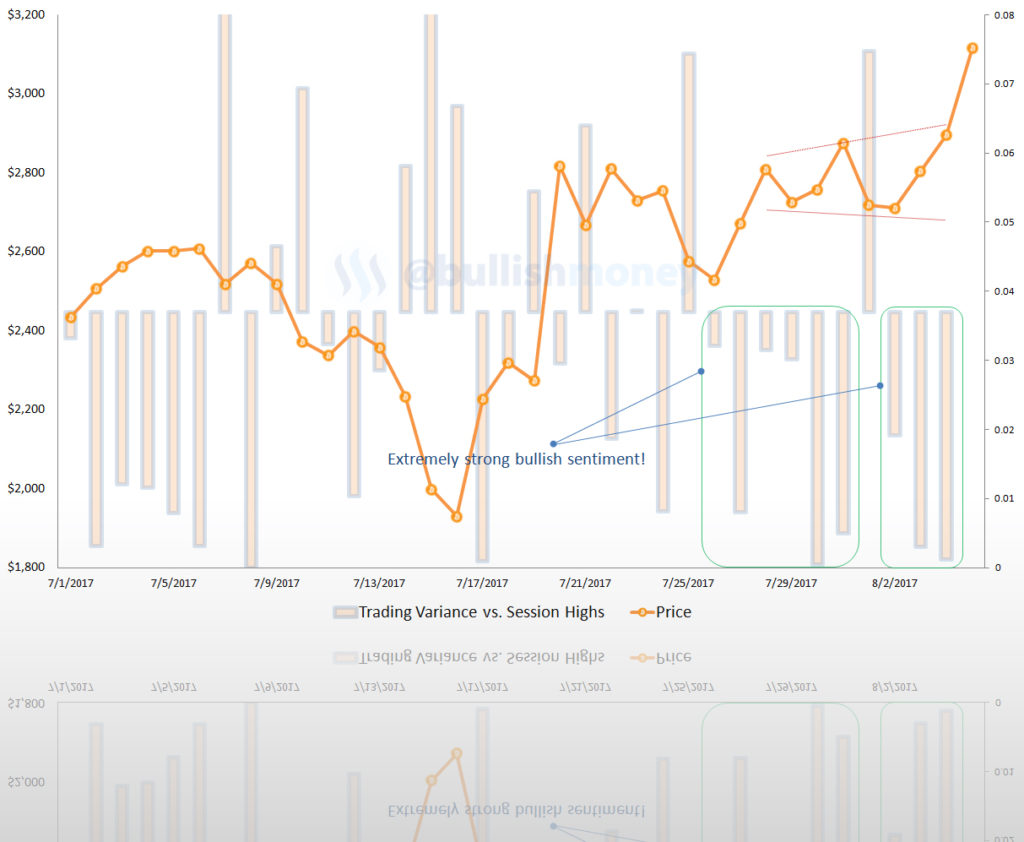 For any publicly-traded investment, you want to see the asset trade as close to session highs as possible. This indicates that the strong hands control the market, and are actively attempting to push the valuation higher.

Prior to and after the bitcoin fork, trading sentiment for the cryptocurrency was exceptionally strong, demonstrating very little variance on average against session highs. The only time that sentiment turned bearish was on August 1 — go figure!

Up until the latest, record-breaking price move, bitcoin was in danger of forming a bearish broadening wedge formation. This is the exact opposite of a bullish pennant; in the wedge, the price action becomes more chaotic and volatile as time passes.

The implications of the pattern was that the blockchain asset would challenge support at around $2,500. However, with the seeming failure of the bitcoin fork sparking necessary sentiment, the original bitcoin appears to be on pace to hit $4,000, perhaps by the end of this year.

No matter what your opinion of the bitcoin hardfork, I think we can all agree that it sparked major, and many times, unnecessary distractions. Such raging debate than spilled over into the mainstream, which caused the media to hype up the event.

The reality is that such moves are not entirely uncommon in cryptocurrency markets. The number-two ranked ethereum split off into two coins, but the original retained its luster. Future hardforks are likely, but moving forward, we should consider the lessons of the bitcoin hardfork.

Before making any move, try to disassociate fact from fiction.