Undoubtedly, the concept of bitcoin manipulation ruffles feathers. We’ve heard several stories about manipulated trading in the precious metals market. However, these are commodities that are largely “housed” in major financial institutions. Investors have simply come to expect shenanigans.

But bitcoin manipulation? Cryptocurrencies represent truly free markets. Investors from around the world can trade at any time without any structural restrictions. All that you need is access to the internet, and a government willing to let you participate. Bitcoin doesn’t even feature traditional safeguards such as a plunge-protection mechanism.

The lack of safety measures have led critics to blast cryptocurrencies as a return to the “Wild West.” They’re not entirely inaccurate. Blockchain-related assets carry considerable risk. But because no one entity controls these assets – broadly part of the decentralization principle – bitcoin manipulation is impossible.

Or so we thought. Outside of a 51% attack, cryptocurrencies in theory are immune to centralized manipulation. But a BTC analysis that I conducted suggest extremely odd trading patterns are at work.

If you followed my work on Crush The Street recently, you’ll notice that I have discussed fraudulent financial transactions. An accounting tool that many in the fraud-detection profession utilize is Benford’s Law.

Using this same principle, I applied it to my BTC analysis, but with some modifications. Since I want numbers with equal chance of being “selected,” I extracted the second-leading number, not the first. This also allows me to compare bitcoin frequencies across multiple years.

For example, the year 2015 featured bitcoin trading frequencies that didn’t match Benford expectations at all. The correlation between BTC trading patterns and expected outcome was less than 12%. 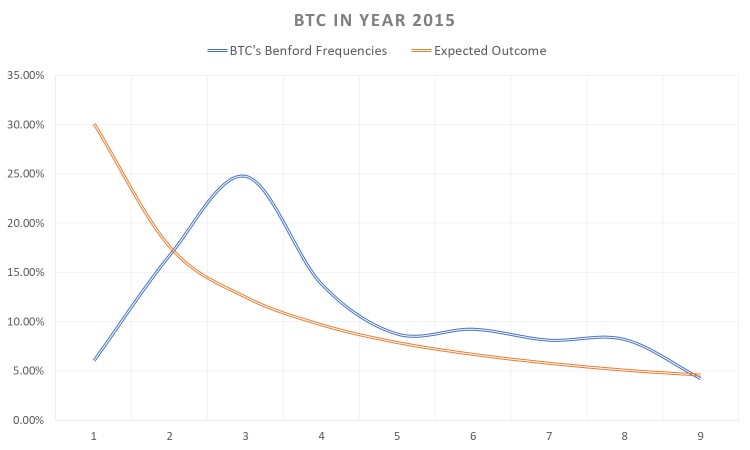 Last year was a major “improvement,” though. My BTC analysis demonstrated that the crypto-coin’s Benford frequencies matched the expected outcome with a 92% correlation coefficient. 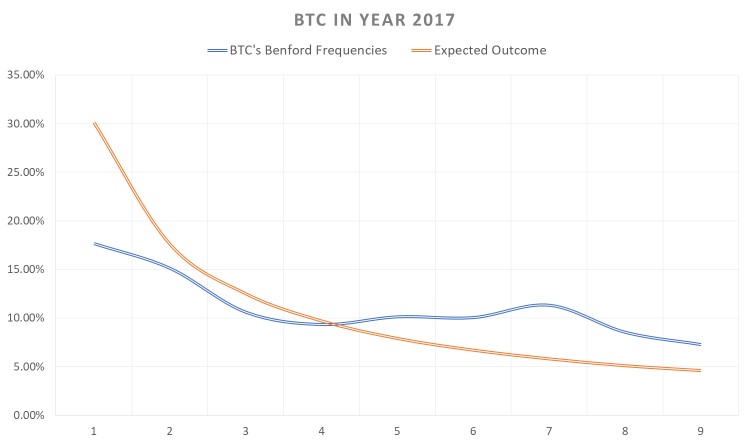 However, this year has thrown a significant monkey wrench into the BTC analysis, leading to my suspicion of bitcoin manipulation. We’re currently seeing a less than 65% correlation with the expected outcome, which suggests some level of “deliberation” within the BTC data set. 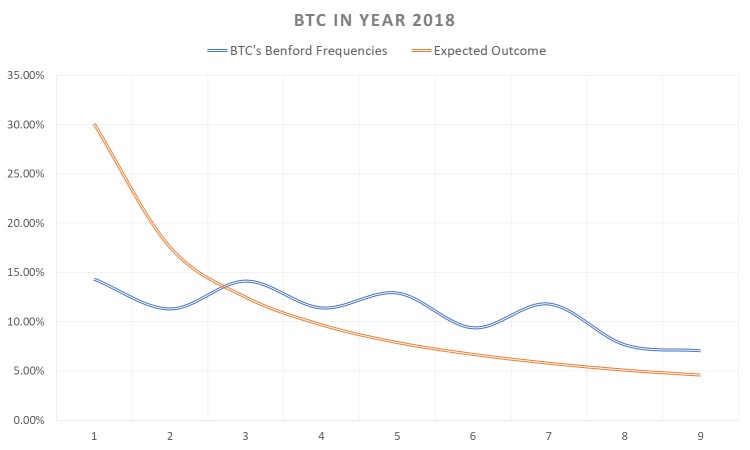 But what really caught my attention was the unusual pattern in bitcoin’s Benford frequencies. The sinusoidal waves suggest that the digits one through seven didn’t occur naturally via the free market. Instead, they appear artificially integrated.

Yes, that sounds crazy. I certainly don’t have absolute proof of bitcoin manipulation. However, the unusual frequencies indicate some kind of centralized editing or management. This is a concept to watch carefully as BTC continues to trek along.