The Bitcoin Price is Directly Related to Its Popularity!

In a Steemit post that largely went ignored, I issued one of my most important analyses of the cryptocurrency market. Comparing the bitcoin price to the allocation of Google searches for the term “bitcoin,” I discovered an empirically undeniable correlation between crypto bullishness and its popularity.

Since the second quarter of 2011, the bitcoin price and Google searches for bitcoin shared a 53.7% correlation. Statisticians would generally consider this a relatively strong statistical correlation, with the strongest relationships generating a 60% coefficient and higher. But further evidence of a significant relationship was established when I selected a timeframe closer to the present.

For instance, since the beginning of 2016, the bitcoin price and its popularity shared a whopping 83% correlation coefficient. Throughout 2017 alone, the coefficient jumped to a near-perfect correlation of 99.8%. In other words, as bitcoin and cryptocurrencies became more popular, their respective market valuations increased. 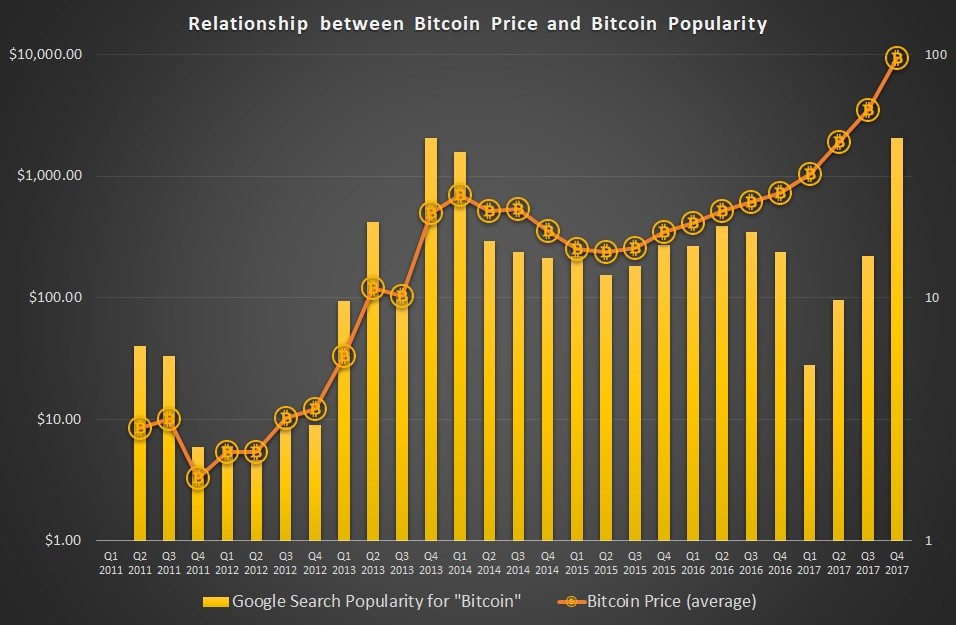 The significance of my research is profound because it disproves the notion that crypto proponents alone can drive the blockchain revolution higher. In fact, for cryptocurrencies to increase their profitability requires more of the general public to jump onboard the train.

But a more important point is that this bitcoin conversion is already occurring. For a two-year period between Q2 2011 and Q1 2013, Google searches for bitcoin averaged 4.3% of all inquiries. But from Q2 2013 onwards, the average spiked to 19.2%, or a whopping 346% magnitude increase!

However, what investors in cryptocurrencies should keep in mind is that during this same time frame, the average bitcoin price spiked an unimaginably massive 10,435%! The bitcoin conversion in this case is the ratio between the price and popularity increase. In other words, people aren’t just interested in bitcoin; they’re buying it in droves!

In 2017, bitcoin’s Google search popularity registered just under 19%. But in the final quarter of last year, the search inquiry magnitude skyrocketed to 45.5%, a whisker above its popularity of Q4 2013, when the virtual currency first hit the $1,000 barrier.

With so much enthusiasm, I see nothing but green lights ahead for all cryptocurrencies. In particular, I’m enthused about the bitcoin conversion rate, particularly because its price point is so damn high. It proves that even with a ridiculous price tag, Bitcoin is scalable, at least from an investment perspective.

The real story, though, is what happens when the general public expands beyond bitcoin. That, my friends, is where the magic will occur!