Is Bitcoin Truly Done For?

Over the last few trading sessions, the cryptocurrency markets have suffered a series of painful declines. At one point, bitcoin dipped to just above $6,500, threatening to spark a decidedly negative paradigm shift. Currently, the king of cryptocurrencies is above $7,000, but how stable is this sector?

Understandably, many are throwing in the towel. Some analysts have suggested that if bitcoin fails to hold critical technical support levels, it could fall to $2,500. Though several crypto investors have pledged to go long no matter the challenges, a retreat to below $3,000 could break the most ardent and resolute.

Worse yet, why the blockchain markets crumbled isn’t immediately clear. One of the obvious culprits is the China-based PlusToken scam. Similar to the BitConnect Ponzi scheme, PlusToken promised robust monthly returns in exchange for major crypto tokens. Unfortunately, many fell for this ploy.

However, Chinese authorities cracked down on the scheme earlier this year. But before they could nab the con artists, they dumped their ill-gotten cryptocurrencies. Law enforcement agencies captured many of the fraudsters, but their monetary paper trail went cold. Thus, we could continue to see crypto dumps, which would negatively affect the bitcoin price.

Still, this is a known headwind. As such, it’s possible, perhaps even likely that another explanation for the recent downfall exists.

Curious about the matter, I decided to analyze the longer-term trend of the bitcoin price. Rather than use typical daily or weekly units, I went with quarterly averages. Such a methodology evens out the daily volatility, presenting a broader picture of the asset.

What I saw was tremendously encouraging. 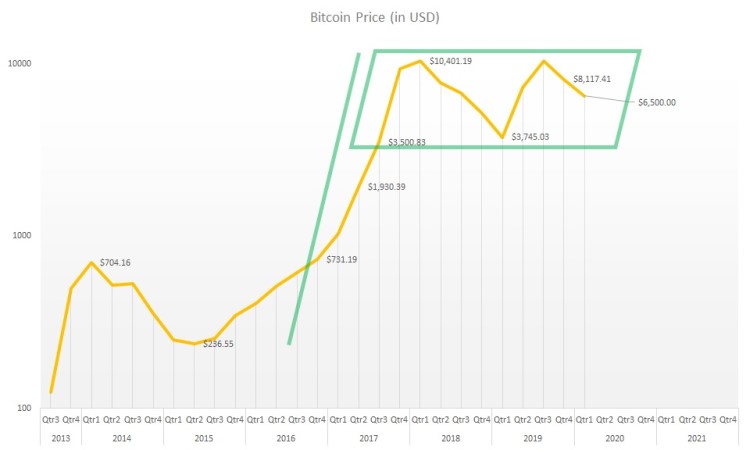 While the mainstream media loves to discuss the huge daily price drops, in the greater context, they don’t amount to much. Even the thousands of dollars that have “evaporated” in the bitcoin price over the months won’t dent the brewing trajectory.

Rather than a fearful moment, I honestly believe that bitcoin is charting a bullish flag (or pennant) formation. These types of technical developments are what’s known as continuation patterns. Take a look at Stockcharts.com’s explanation of this pattern and see if you don’t agree with my interpretation.

Chances are, you will.

Furthermore, based on historical trends and cycles in the crypto space, I anticipate that the earliest that bitcoin will break out of its consolidation will be sometime in the third or fourth quarter of 2020. Therefore, this is not the time to give up on cryptocurrencies; rather, it’s a moment to consider advantaging the discount.