Black Gold is Cheap, and the Consumer Isn’t Driving Gas Prices This Summer

For as long as I can recall (and that’s too long), when summer driving season approached with the expectation of swimming at a beach, the mountain retreat, or taking a cross-country trip to Uncle Joe’s, the price of oil and gasoline always went up due to the increase in demand, and more often than not, due to greed.  There have been very few exceptions.  This summer, the price has mysteriously plummeted.  Despite the low prices, most folks are not spending much more on anything.  But hey, the economy is so hot with inflation bubbling along, so much so that the Federal Reserve is raising interest rates into weakness.  Remember, Yellen has told us all last month that, “I don’t believe we’ll see another financial crisis in our lifetime.”  Exactly whose lifetime is she talking about, Ben Bernanke?  Wasn’t it Bernanke that said everything was peachy just before the housing bubble crash?

Those that follow boring stuff like velocity of money or inflation know the formulas now being used are skewed and don’t reflect the reality of average Joe expenses.  Yes, gasoline may be “cheaper” this year, but only comparatively speaking.  And apparently, food and energy just don’t matter anymore to the maestro behind the curtain when it comes to inflation math.  As for Black Gold or Texas Tea, Yellen said those flavors of deflation are just some more of those “transitory” indicators.  Nothing to see here – move along.

Janet Yellen and the Case of the Missing Inflation… “Falling prices are a temporary blip that will soon be forgotten.. Using the economic models on which the Fed has traditionally relied and which were taught to generations of undergraduates, that would seem to set the stage for higher inflation. Employers would compete for workers and hike wages, fueling broader price increases for all types of goods and services.  But there is little evidence this cause-and-effect is actually happening. The Fed has defined stable prices as inflation of 2%. Right now, not only are key inflation measures below that level, but they are also falling. The most recent reading of the inflation measure favored by the Fed is at only 1.5%. And the (CPI) Consumer Price Index, excluding volatile food and energy prices, rose 1.7% over the year ended in May, down from 2.2% in February.” – NYT, June 2017 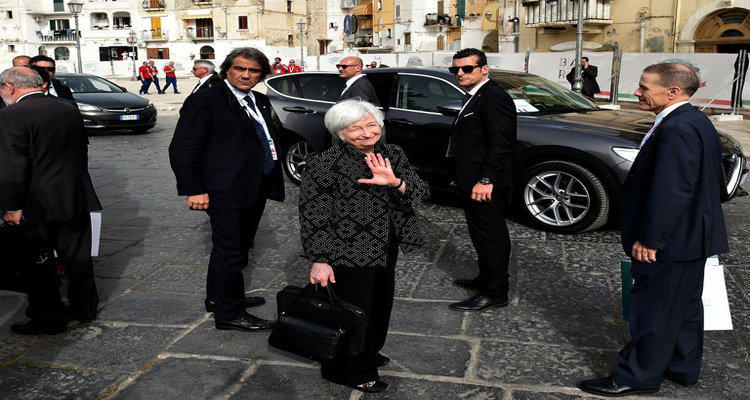 So what does consumer inflation really look like if we use the old formula?  John Williams over at ShadowStats.com has that covered… 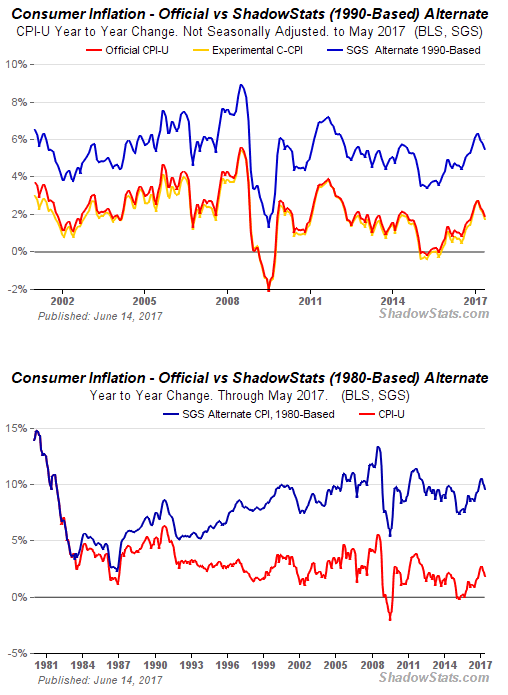 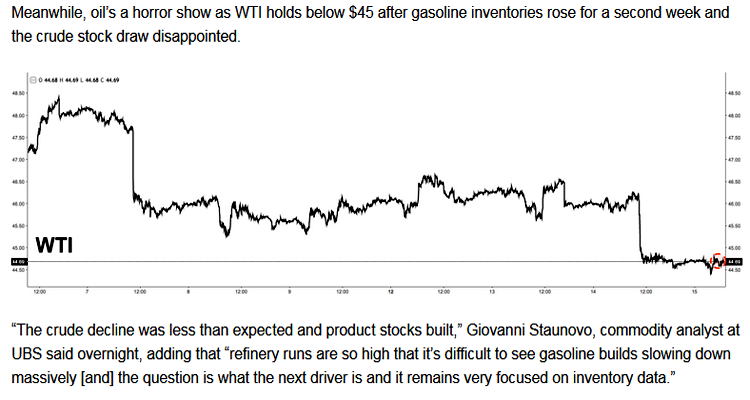 As I type this post, WTI Crude Oil is trading at $44.53 per barrel.  On the following chart, gold is overlaid, and I’ve placed a black arrow over every July on oil since 1995… 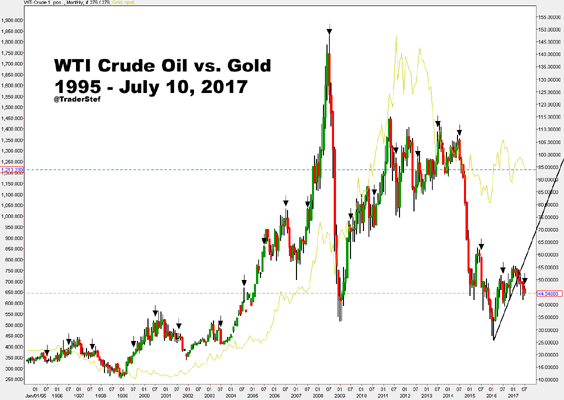 I thought that since the Fed printed trillions, we should’ve been humming along by now.  Must keep the shale boom in business, right?  But where’s that “cheap” oil going if it’s not being pumped into a Beverly Hillbillies jalopy for a summer romp at a progressive California beach?

Prices at the Pump to Stay Low… “The problem remains the same: Too much supply and not enough demand. Both in the United States and overseas, the amount of oil and refined fuels held in storage is unusually high. Demand looks healthy, but it’s not strong enough to whittle down the supply overhang quickly enough to satisfy traders worried about the glut.” – Kiplinger, June 2017

BofA Stunned By Drop In Gasoline Demand: “Where Is Driving Season?” “with the US now inside peak summer driving season, the cyclical drivers behind gasoline supply and demand are vastly different, and yet something has remained the same: gasoline demand in the US simply refuses to rebound, surprising analysts by how weak it is. So weak, in fact, that Bank of America has released a note which, like Goldman half a year ago, reveals confusion about why – if the economy is indeed strong –  demand hasn’t kept up and has prompted BofA’s energy analyst Francisco Blanch to ask “where is the driving season?“ and, more specifically, “is this year’s driving season over before it began?” – ZeroHedge, July 8, 2017

What Oil Bulls Are Missing… “The problem is that, as has been the case over the past year, stockpiles aren’t coming down because the oil is being used, it’s just being moved overseas. And nowhere is this more visible than in the record amount of oil exported overseas… U.S. total oil inventories fell in the March-June period for the first time this century”- ZeroHedge, July 10, 2017

Okay, so if you’re one of the fortunate few that are going on a real vacation this year, how are you going to pay for it?  The economy stinks of depression while approaching another recession, the POTUS is being crucified by fake news from the prestitutes, you’re possibly living paycheck to paycheck with no emergency fund cash, gasoline is cheap, your bank account pays no interest to speak of, and Obamacare has taxed and scammed you and every middle class American out of thousands.

Exposing the Bums and Frauds of GOP… “my health insurance went from $500 per month to $2000 per month. And because the deductible and co-pays rose so dramatically, it now covers nothing.  So my bill actually went up about $2000 per month. That means Obama’s lies scammed me out of $25,000 per year. That’s $250,000 per decade. That’s about $1 million over my lifetime.  With increases and interest, maybe $2 million.  All sold with lies and misrepresentation…nobody has any money… if you’re saving $100 on cheap gas, your spending $1500 more on health insurance… no money left for clothes, gas, vacations, driving, life, food, restaurants… the entire economy is hurting.” – Wayne Root, July 10, 2017

Aha, use a credit card with cash back or frequent flyer miles!…

1 in 5 Americans Will Go into Debt to Pay for Summer Vacation… People who already have debt are twice as likely to use debt to cover some vacation expenses as people who are debt-free: 30% vs. 13%.  Vacationers who plan to use debt to pay for their vacation will also spend nearly twice as much as the average vacationer: $4,351 vs. $2,936”  – MagnifyMoney.com, June 2017 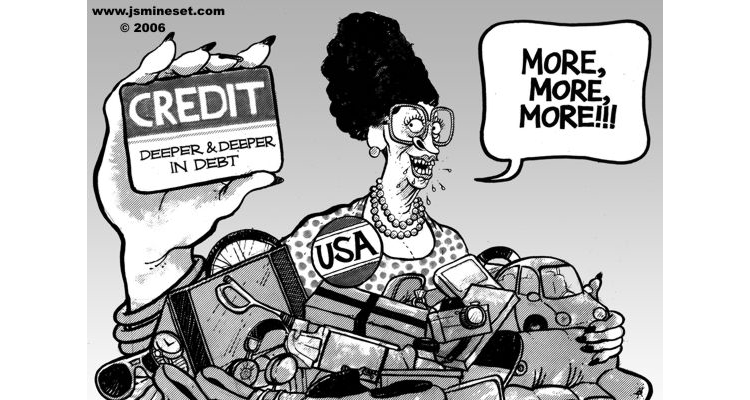