If you noticed something strange recently in gold prices, you’re not alone. The yellow metal suffered its worst single-day collapse today, dropping nearly 2% against last Friday’s session. But the real story was a much smaller magnitude decline on June 26.

On that day, gold prices closed down about 1%. But within the session itself, gold bullion lost 1.7%, just a tenth of a percent shy of today’s massive selloff. The question, though, was why. Over the years, gold volatility has substantially let off, despite the fact that intense geopolitical tensions and economic concerns were rippling throughout the markets.

Precious metals typically do well under periods of unease or uncertainty. Gold markets especially represent a safe haven from foreign currency fluctuations and unexpected dynamics within the traditional equity indices.

Was this a trading mistake by a junior broker, or are gold prices finally reacting to the fundamentals?

Bloomberg Markets first reported rumors that traders were spreading about a “fat finger” incident, or an erroneous order. The rumor had substantial weight, considering that “Trading jumped to 1.8 million ounces of gold in just a minute, an amount that’s bigger than the gold reserves of Finland.” 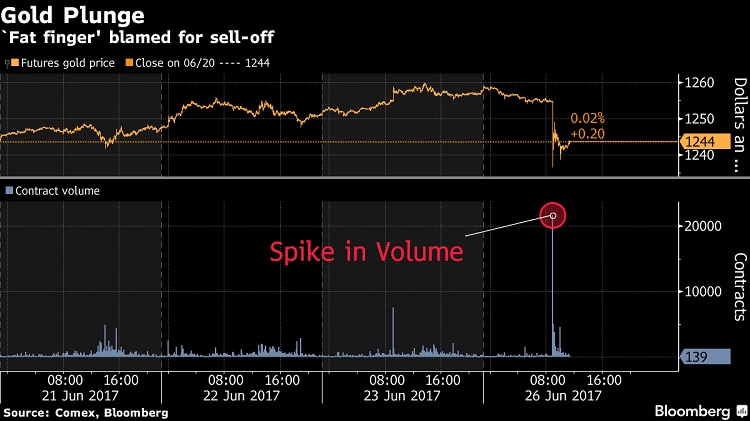 Bloomberg further reported confusion among analysts to come up with any other reasonable answer. “’No one has a clue, apart from the unfortunate individual that pressed the wrong button,’ David Govett, head of precious metals trading at Marex Spectron Group in London, said of the spike in volume. Thin activity and automated trading may exacerbate such moves, he said.”

Although that a fat finger incident has sparked other flash crashes before, it’s unlikely that a junior broker would have access to make such colossal trades on his or her own. Given the oversight that the broader financial industry has suffered, any small mistake could have severe consequences for the guilty firm.

Perhaps it wasn’t a mistake at all, but a foreboding reflection of the times. According to several foreign policy experts, U.S.-Russia relations are at an all-time low. Terrorism is spreading across the globe like wildfire. The Middle East is completely out of control. To top it all off, North Korea seems hell-bent on sparking an unprecedented Asia-Pacific warfare. 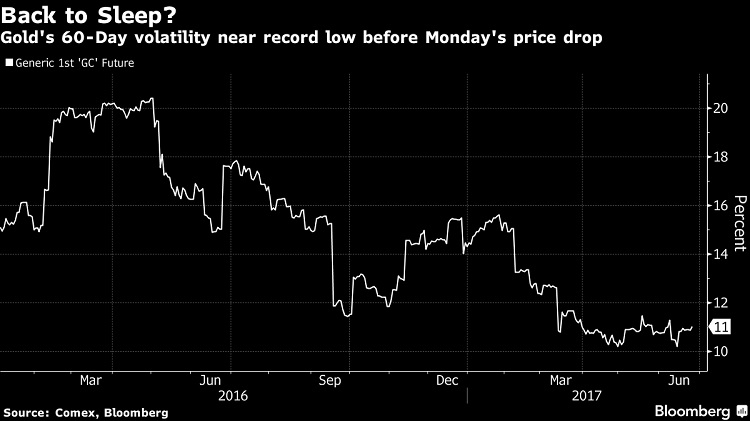 Gold prices certainly respond to such international incidents and dynamics. The problem is that given the ugliness of geopolitics, gold and the entire precious metals complex should be moving higher, not lower. Indeed, investors are more encouraged than ever to seek viable safe haven assets. Since gold has been the absolute standard for a fungible store of wealth, the yellow metal should be a logical choice.

The bearish trading firmly indicates that this is not the case. And if this wasn’t a fat finger incident, a trader is deliberately betting against the psychological consensus of the markets. This then brings us to the next possible source of the mysterious gold collapse.

Bloomberg Businessweek dropped a stunner when it reported that gold manipulation could be the culprit. With the complexity of modern markets, it’s quite feasible that an entity carrying enough leverage could sway gold prices in its favor. Such accusations have been forwarded by the alternative media, but have been quickly derided by the mainstream. 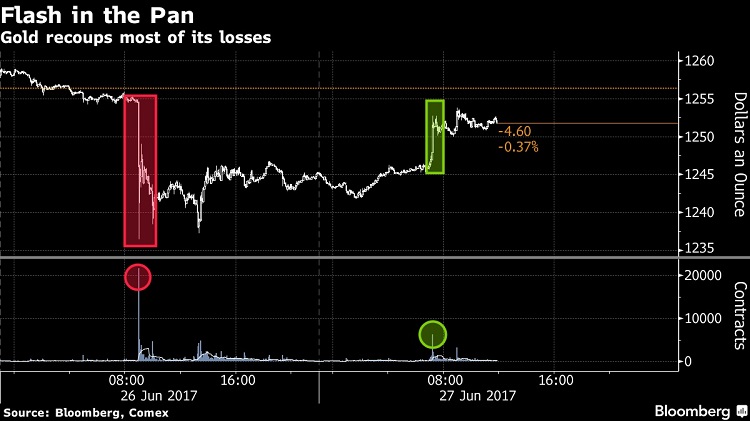 Not any longer. In Bloomberg‘s article, “Gold Gets Its Own Flash Crash,” authors Susanne Barton and Eddie van der Walt wrote the following:

Other theories circulated. Was a short seller trying to manipulate the gold options market? Options were set to expire on June 27, and pushing the price of gold down to $1,200, a key technical level, would fuel more selling and potentially bolster the value of expiring options. With Italy mired in a banking crisis, one trader suggested a troubled financial institution needing to raise cash might have sold bullion to shore up its balance sheet.

Shockingly, you will not find this story anywhere on Bloomberg‘s website (at least as of the time of writing). Instead, you must be a subscriber to their print magazine catalog to read it. Not only that, the story was stuffed somewhere near the middle of the magazine, ensuring that only a few interested people will have access to this critical information.

What I will encourage you to do right now is to bookmark this article for your own posterity. Then, share this with your family, friends, and concerned associates.

This is the first time I personally have seen where the mainstream media was forced to acknowledge the reality of gold manipulation. Prior to that, manipulation in the precious metals markets were forwarded mostly by “YouTube gurus” or people with questionable credentials or agendas. It was also an idea mocked by mainstream business media.

Now, the concept and controversy of manipulating gold prices for financial gain is out in the open. Yet as I mentioned earlier, this story is only limited to print media. Not coincidentally, print media is a dying industry.

Again, for your own posterity and to provide strong evidence to bolster your own defense of gold investments, please bookmark this article. With your help, we will ensure that the truth will remain free.