Many years ago, Wall Street traders and observant market commentators watched the yield curve with major intent. Some of the movements would dilate pupils more than others. Movements brought the spread to decade-lows this week. The most notable indicator occurs between the 2-year and 10-year Treasury, as this is usually a precursor of a recession. This metric has determined every recession since 1955 and an inversion seems likely, but that has not occurred just yet. A notable move in the last week has been the spread between the 3-year and 5-year Treasury bonds. Seasoned traders and the big newspapers are taking notice. Articles have shown up in Bloomberg, MarketWatch, CNBC, Yahoo Finance, and CNBC. As of Wednesday, December 5th, the 3-year Treasury sits at 2.8106 and the 5-year Treasury sits at 2.7888. 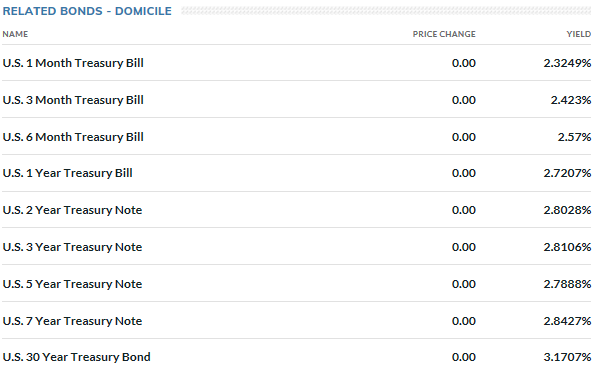 The spread between the 2-year and 3-year bond inverted for a short time but went back to the 3-year being higher than the 2-year. Over the next several weeks, the inversion of the 2-year and 3-year is likely. It looks increasingly apparent that markets do not believe the Fed, Trump, China, and world leaders. Stories are leaked, floated, and tested to manipulate investors. Newspaper headlines manipulate the algorithms to move markets all over. When stories come out that are not advantageous, world leaders tweet out in barrages trying to prove or disprove stories. What is fascinating to watch over the last week is how fast we went from a “truce” to tariffs and a slumping market. Yield curve watch is officially back on. Investors do not believe Federal Reserve officials that come out and talk up the market when things begin looking sketchy.

The last time the 5-year Treasury bond was higher than the 3-year was 2007. Risk happens fast, and in since 11/8, the 10-year bond has fallen 18 basis points. Rising trade tensions and algo buying headlines have led to the 10-year going from 3.09 on 11/8 to 2.88 on 12/4 at one point. An 18-basis-point drop in a week is a large move in the bond market. Investors are beginning to be fearful and are moving away from risky assets. The problem with bonds is they are also a risk asset backed by a central bank who is clearly in a box. Before the last two recessions, the 2-year and 5-year inverted in addition to the 2 and 10.

Of note, TIPS bonds are inflation-linked bonds that protect investors from inflation. Principal of a TIPS security increases with inflation and decreases with deflation as measured by CPI. TIPS 5-year bonds have just passed 10-year bonds.

This is an inversion of real interest rates, and the fact that Treasuries are inverted is another sign of weakness. In the bond world, as yields decrease, that means investors are buying bonds. As yields increase, it means bonds are being sold. As investors sell the short end of the curve, it begins to even out with the long end of the curve.

Over the next several months, the crucial 2-10 spread will be watched with much anticipation. Laws of economic nature will correct to fair value at some point, and 2019-2020 have been on my radar for some time.  Gold’s time is coming.