Why are gold prices rising at this juncture? To many, this is a ludicrous question. Precious metal bullion are responding to geopolitical tensions, which can impact financial markets if left simmering. Gold prices also reflect uncertainty that traditional investments can handle macro-scale volatility. They are the true indicator of mass economic sentiment — and currently, the masses are scared.

Anyone that has turned on the news recently can acknowledge that the fears are real. First, U.S. relations with Russia are near all-time lows, or are already there according to foreign policy experts. The Syrian missile strike did nothing to improve those relations. Second, North Korea is making plenty of noise again. This administration, in sharp contrast to the previous, is not afraid to meet fire with fire.

That may be great news for the military industrial complex, which cynically stands to benefit from global conflicts. It’s also a superb catalyst for gold prices. Few elements like the specter of nuclear warfare can rile up the bullion markets. Even financial traditionalists that eschew gold for “paper investments” are validating bullion as a hedge.

Although logical, the impetus for gold prices may not be wars, or the threat of wars. Instead, the vast majority of the surge is due to the bond market.

Recall that in the summer of 2016, the remarkable recovery rally in gold prices abruptly hit an upside limit. In the fall, the valuation for precious metals plummeted. Not coincidentally, the key interest rate in the summer was buoyed by the Federal Reserve, who promised to continue unwinding the era of quantitative easing. As government-released employment figures continuously showed improvement, the need for QE lessened. Bottom line — the bond market finally started to recede. 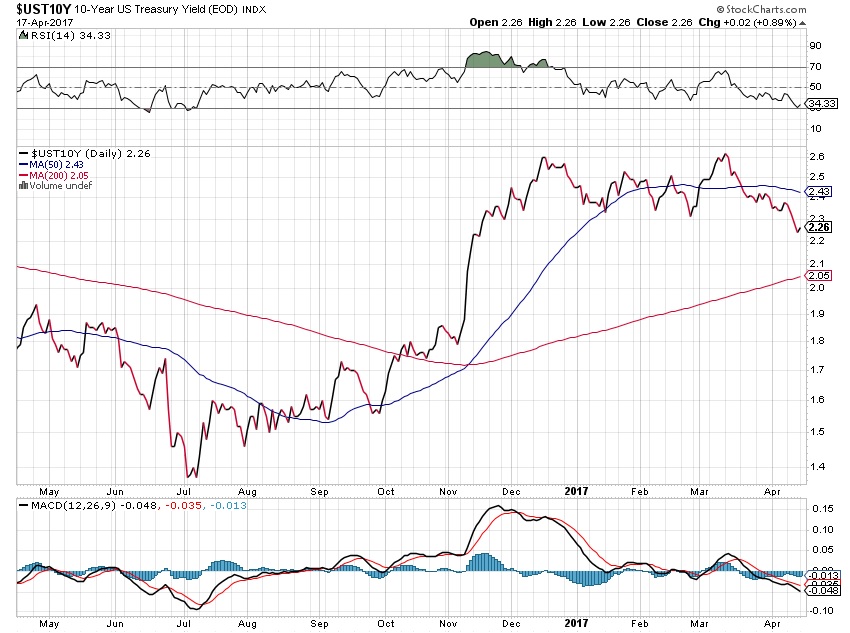 But now, we’re embarking on a circumstance that is opposite what the Fed was anticipating. Rather than the interest rate continuing to move higher through ever-stronger jobs reports, the bond market has gone into a consolidation phase. As it stands, the key interest rate is near an inflection point. Based on technical pressures, the U.S. 10-year note may fall to around 2%. From there, it’s anyone’s guess.

On the same plane, gold prices also reached an inflection point. They could continue to break higher past previous resistance. If so, you can expect bullion to experience a massive recovery, possibly even reach all-time records. Simultaneously, should this occur, I wouldn’t be a big fan of equities and other traditional investments.

This is truly where things get interesting. Wall Street insiders know that something will happen. It’s not a coincidence that the bond market has paused at this critical juncture. Any flashpoint — economic, political, or outright warfare — could swing these markets in either binary direction. Unlike other inflections, though, the magnitude could be something fierce.