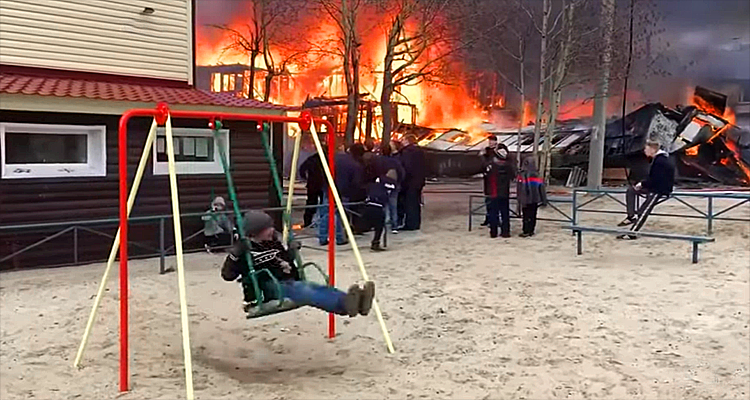 The spring and summer downturn in the U.S. housing market did not conform to the seasonal pattern following President’s Day, which is normally the busiest and most profitable time of year for real estate brokers and home builders. There are innumerable reports since publishing “The Illusion Next Door to Housing Bubble Happiness” in April 2022 (Twitter thread) from industry insiders, mortgage origination companies, institutional investors, homebuilders, professional real estate organizations, and the mainstream financial press squawking about the deterioration in housing market fundamentals, statistics, and layoffs impacting mortgage origination services.

Following unprecedented loose monetary and fiscal policy that coincided with the pandemic’s influence on an explosive phase of housing price appreciation, the Federal Reserve implemented an anti-inflation hawkish monetary policy in March 2022 by raising interest rates into a weakening economy. Worsening matters is the economic backlash in energy markets and supply chain disruptions because of Western sanctions imposed on Russia due to the war in Ukraine. The aftermath is squeezing the plebes from all directions and is covered in “Welcome to the Most Anticipated Recession in History,” published in late June (thread).

The Fed Is Making It Up as It Goes, So It Ditched Forward Guidance… “The Federal Reserve’s Federal Open Market Committee announced Wednesday it is raising its key policy rate—the federal funds rate—by 75 basis points to 2.5%. According to the FOMC’s press release, the committee recognizes that economic activity is declining but that Consumer Price Index (CPI) inflation also ‘remains elevated’…  This then leaves us with the question of what now. The Fed doesn’t know, and the weakness of the present economy will keep the Fed very cautious moving forward. As is clear from Powell’s press conference Wednesday, following the release of the FOMC statement, the Fed is still holding out hope for a ‘soft landing’ in which it can significantly reduce inflation without sizably reducing employment or causing a greatly weakened economy.” – Mises Wire, Jul. 27

Adding misery to the housing data I’m about to cover, consumers are paying more for less, and that’s skewing retail sales data higher than expected at stores like Walmart and Home Depot at the same time mass evictions and foreclosures appear to be in the pipeline.

Grocery Inflation Hits Highest Level in 43 Years Despite Biden’s ‘Zero’ Inflation Messaging… While the annual pace of inflation in the United States eased slightly in July, a deeper dive into the numbers reveals that some of the categories that hit every day Americans especially hard in the pocketbook have soared, with the price of groceries jumping to the highest level since 1979.” – Epoch Times, Aug. 11

Mass Evictions and Foreclosures Loom… Crashing Real Wages and persistent Inflation squeeze Americans in a financial vise… prepare for evictions and foreclosures to explode in America in the coming months as a toxic financial one-two punch of crashing real wages combines with sky-high inflation to force millions of Americans out of their homes. A July survey from the Census Bureau, reported by Bloomberg News, found that a staggering ‘5.4 million households, or 40% of households that are not current on their rent or mortgage payments, said they were likely to be evicted or foreclosed on in the next two months.’” – Patria with Steve Cortes, Aug. 15 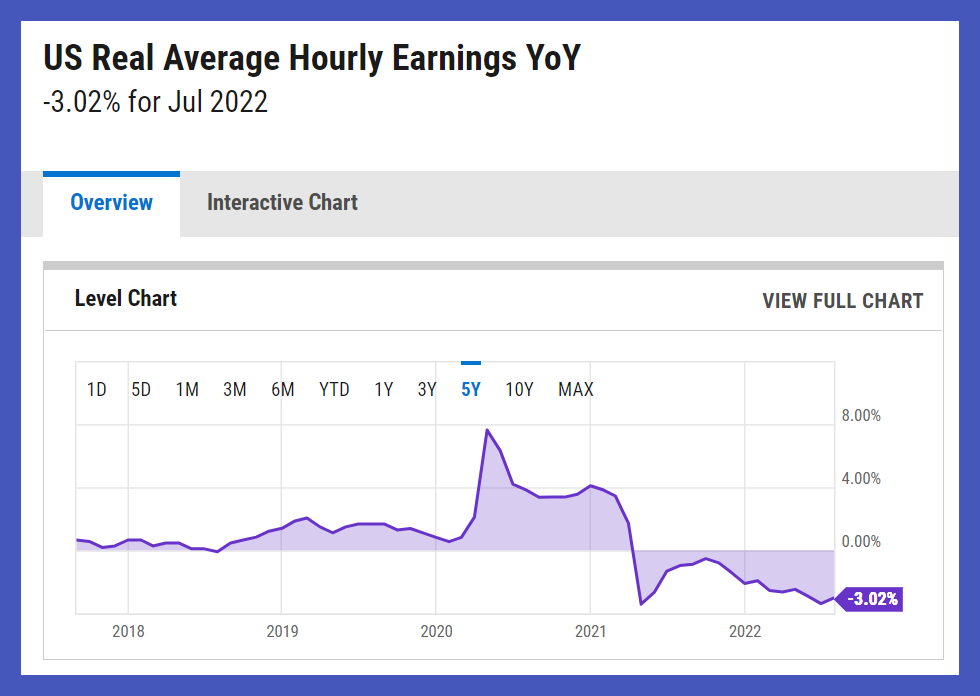 Rocket Mortgage 2Q22 profits plunge amid market slowdown… “Bottom line, net income dropped about 95% and top line revenue was cut in half… If loan volume doesn’t turn around, the company will have to cut costs far more than they did in the quarter, and that could mean layoffs in Detroit at one of the city’s most important companies.” – Detroit News, Aug.

Compass, which considers itself the “#1 Brokerage in the U.S.” for real estate sales and rentals and hypes its technology platform, is currently burning through operating revenue at a record pace, laying off 10% of its workforce, describing market conditions as “extremely challenging,” and expects the housing market to nosedive at least 25% more than where industry pundits believed it would be just six months ago. Here’s an excerpt from the 2Q22 earnings call:

“There’s still buyer demand, and still prices are flat in good markets; they’re down to modestly down into the more challenged markets. But there’s no longer multi offers everywhere like we have before. Days on market are definitely increasing. And so overall, we’re still negative on outlook.” – Compass CEO, Aug. 15

Homebuilders say the U.S. is in a ‘housing recession’ as sentiment turns negative… “The National Association of Home Builders/Wells Fargo Housing Market Index dropped 6 points in August to 49. Anything below 50 is considered negative. This marks the eighth straight decline in the index. ‘Tighter monetary policy from the Federal Reserve and persistently elevated construction costs have brought on a housing recession,’ said NAHB Chief Economist Robert Dietz.” – CNBC, Aug. 15

“U.S. Housing Market Index (measure of homebuilder confidence) is back below 50 for the first time since May 2020. Key quote: ‘19% of homebuilders reported reducing prices in the past month to increase sales or limit cancellations.’” – Charlie Bilello, Aug. 17 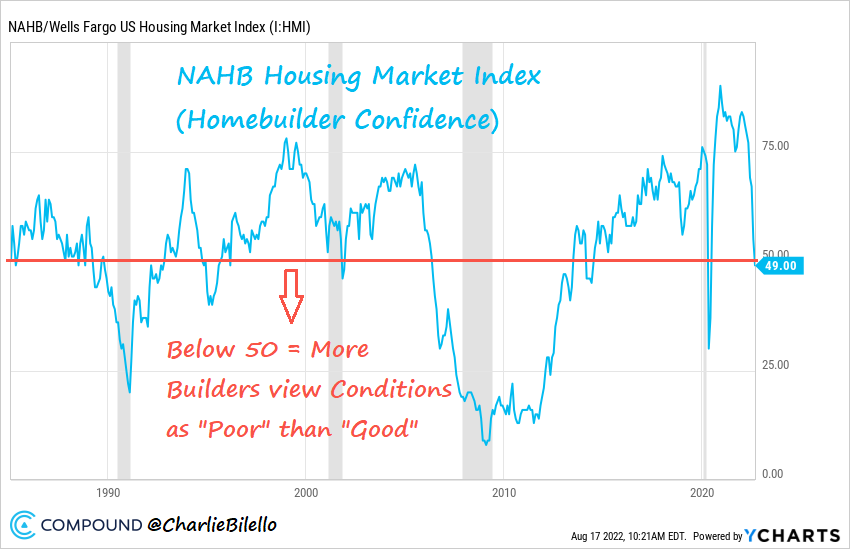 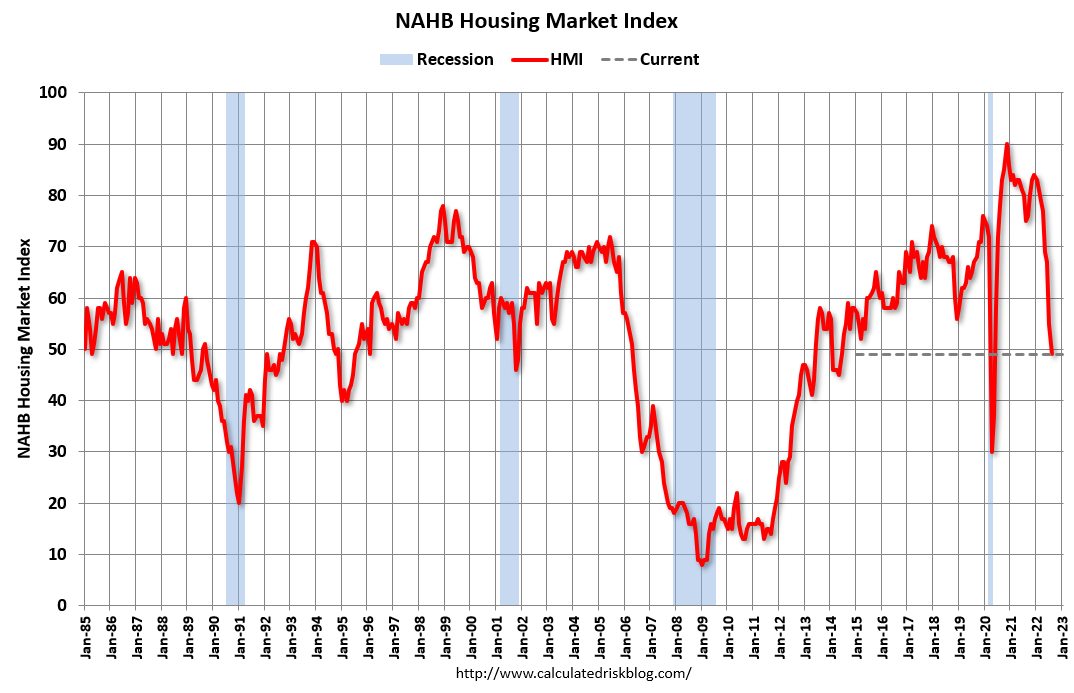 Despite a small uptick in expectations within University of Michigan’s survey of consumer sentiment, confidence in the ability to purchase houses, vehicles, and large household durables is in recessionary territory and at lows last seen in the 1980s. As of early August, the 2-month change in median price of a new single-family home has cratered to -11.9% (worst in history). 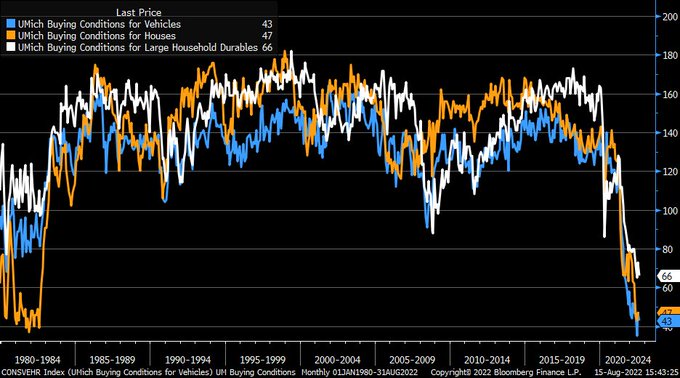 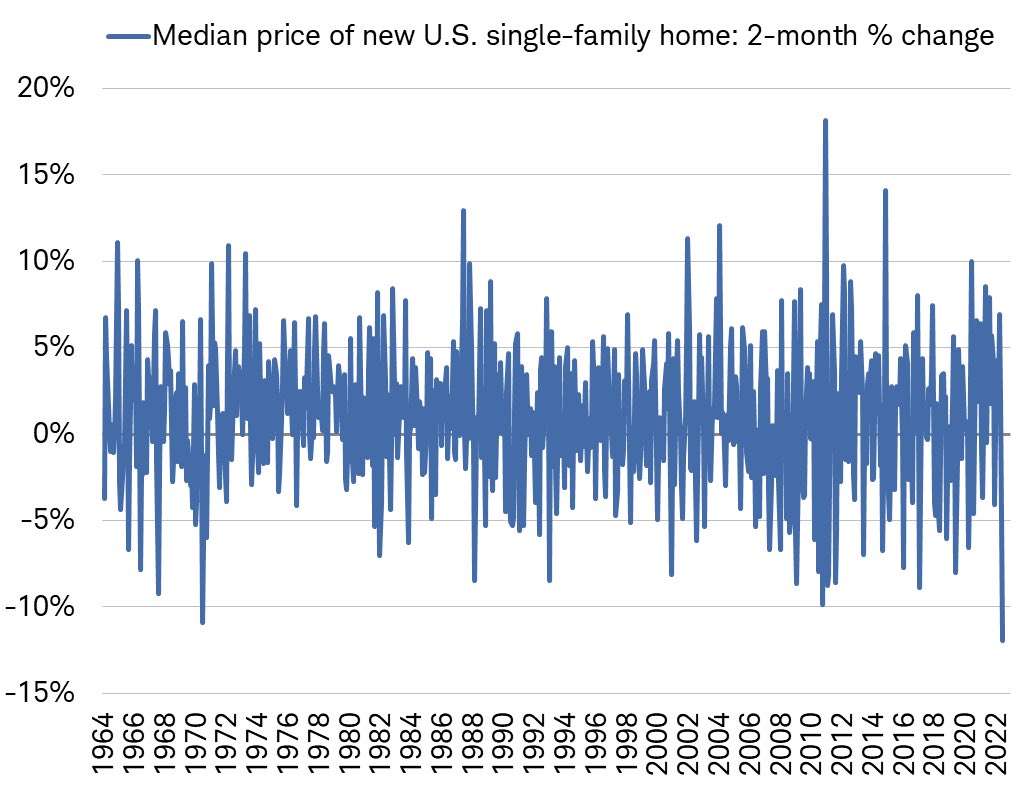 House Prices in San Francisco & Bay Area Experience Steep Declines from April Peak Craziness… “Sales volume plunged 38%. The median price of single-family houses in the San Francisco Bay Area peaked in April and has dropped every month since then. By July, the median price, at $1.33 million, was down by about $220,000 from the peak and by 2% year-over-year, undoing most of the huge gains in 2021 and early 2022.” – Wolf Street, Aug. 11

Current State of the Housing Market… “Reported house price growth is still very strong, but the Case-Shiller National Index has started to show a slight deceleration to 19.7% in May. The recent slowdown will take some time to show up in the price indexes… Altos Research CEO Mike Simonsen noted this week that ‘prices reductions’ are above normal. And he expects 40% of properties will see price reductions by September.” – Calculated Risk, Aug.11

4th Look at Local Housing Markets in July… “The big story for July existing home sales is the sharp year-over-year (YoY) decline in sales… I’m tracking about 35 local housing markets in the US. Some of the 35 markets are states, and some are metropolitan areas. I’ll update these tables throughout the month as additional data is released.” – Calculated Risk, Aug. 17

Sellers are still trying to lock in bubble territory pricing for their homes, but a majority of buyers are saying to take a hike as inventory increases and prices drop. Housing values will continue to plunge until sellers figure out where the buyers are, and they’re going a lot lower.

Homebuyers Are Increasingly Backing Out of Deals as Slowing Market Boosts Negotiating Power… “Nationwide, roughly 63,000 home-purchase agreements fell through in July, equal to 16.1% of homes that went under contract that month. That’s the highest percentage on record with the exception of March and April 2020, when the onset of the pandemic brought the housing market to a standstill… Some buyers who are backing out of deals have a mindset the market is crashing and they’ll get a home for $100,000 less in six months… Jacksonville FL and Las Vegas NV had the highest rate of home-purchase cancellations while Newark NJ and Omaha NE had the lowest.” – Redfin, Aug. 16 (full data table at link) 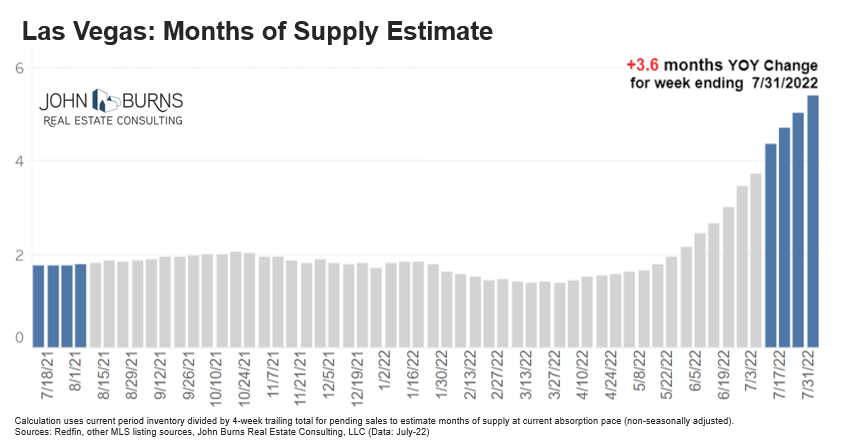 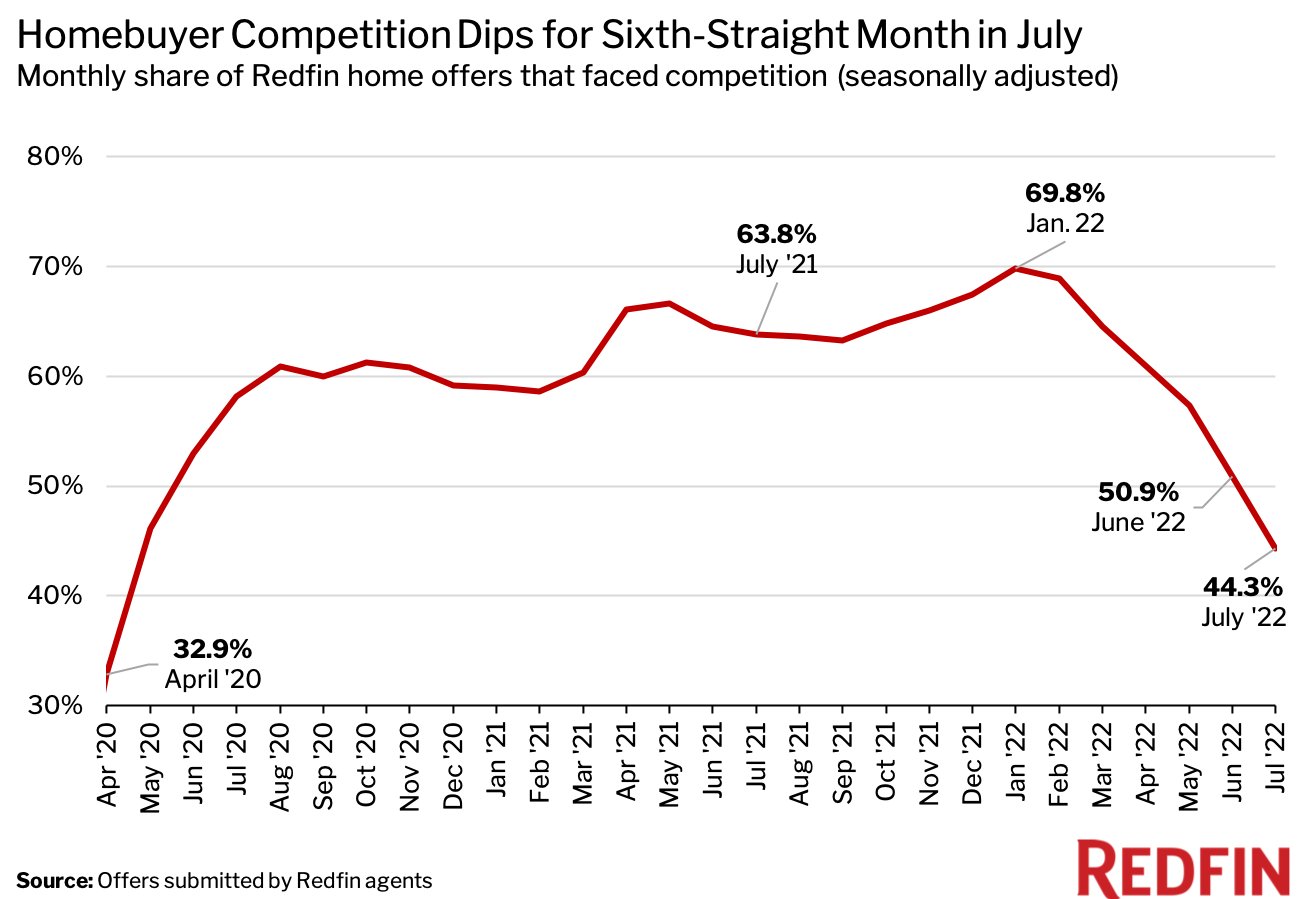 “U.S. mortgage payments as % of income higher than the top of the subprime bubble. What could go wrong? Chart via Richard Dias CFA” – Michael Arouet, Aug. 16 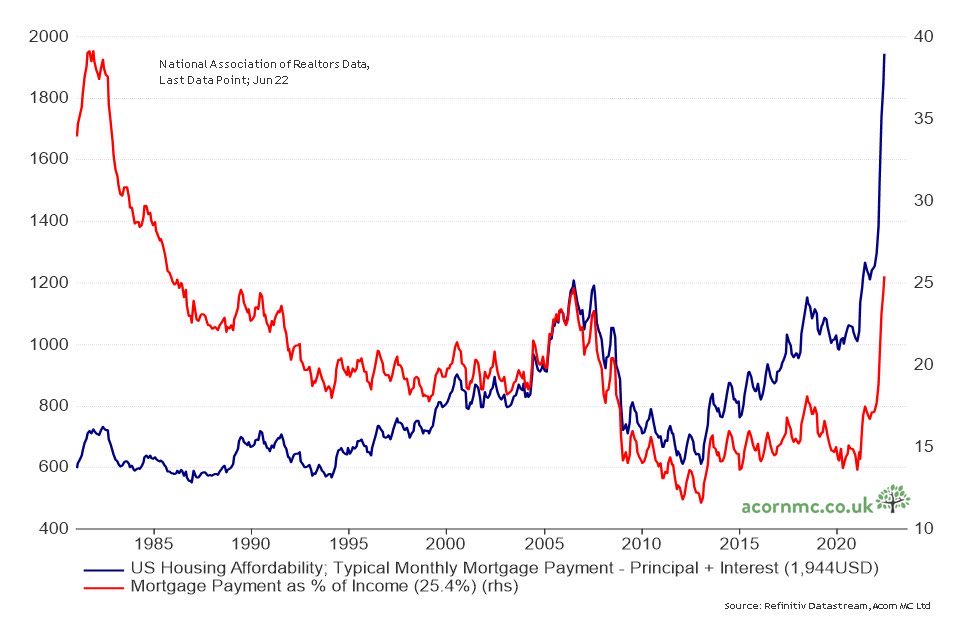 “We knew New Housing data was going to be ugly… At least permits were down less than expected” – Di Martino Booth, Aug. 16 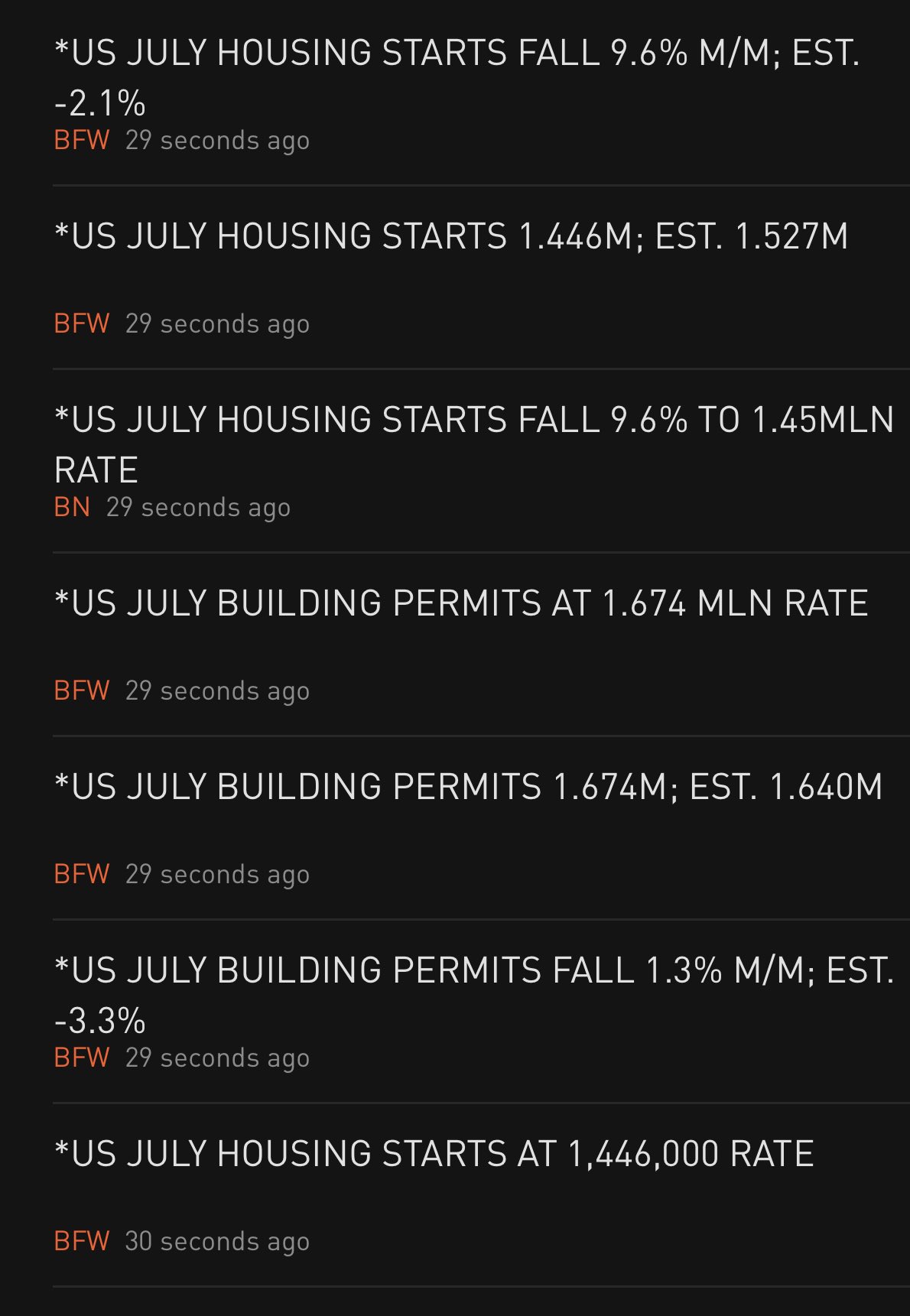 “FED FUNDS FUTURES TRADERS ARE PRICING IN A 57.5% POSSIBILITY OF A 50 BASIS POINT HIKE IN SEPTEMBER FOLLOWING THE RELEASE OF FED MINUTES.” Financialjuice, Aug. 17

Those who bravely dived into the pandemic-laced housing market out of necessity or choice faced countless challenges and disappointments. Here are some survey excerpts from Anytime Estimate:

3 in 4 Pandemic Homebuyers Have Regrets About Their Purchase… “Clever Real Estate surveyed 1,000 people who purchased a home in 2021 and 2022… Nearly 25% of all buyers were not satisfied with their home-buying experience. 80% compromised on priorities (finding a home in a good neighborhood was the No. 1 priority of 50% of respondents). 80% made more than one offer. 41% of those who made multiple offers put an offer down on five or more homes and 10% made an offer on 10 or more homes. First-time buyers, 66% of whom were millennials, were more likely than repeat buyers to take risks and paid a median price of $510,000, 13% more than repeat buyers. Other key findings:

The American Dream is in for a rough ride as we slide into 2023.

The Illusion of Happiness by Steve Cutts 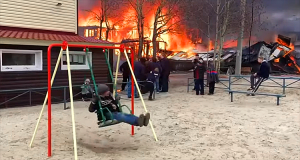