With Bitcoin rapidly approaching the $7,500 level (and by the time you read this, it may have already eclipsed that point!), we’re now only a third of the way away from a previously unimaginable target: $10,000 Bitcoin. When I officially went public with that price target, the cryptocurrencies tanked following the Bitcoin Cash hardfork. Today, the lofty price point seems like a foregone conclusion.

Of all the cryptocurrencies, Bitcoin garners the most attention, and for obvious reasons. Primarily, it was the first to market with the blockchain concept. Thanks to the enormous rush of popularity, Bitcoin also has the highest level of credibility. Whenever discounted opportunities arise in the cryptocurrencies, a flight to quality pushes the coin to ever-higher levels.

But astute investors are really looking to Ethereum as the next big play. This is no slight on Bitcoin; however, Ethereum is a broader scoped and more efficient version of the original blockchain. Bitcoin promised to remove the third-party intermediary in financial transactions. Ethereum, on the other hand, intends to remove corruptible intermediaries in almost all business transactions with its smart-contract technology.

As I mentioned in a recent article for Crush The Street, Ethereum prices could be headed higher based on technical momentum and psychological factors. At the same time, we should also pay attention to the Bitcoin-to-Ethereum ratio. 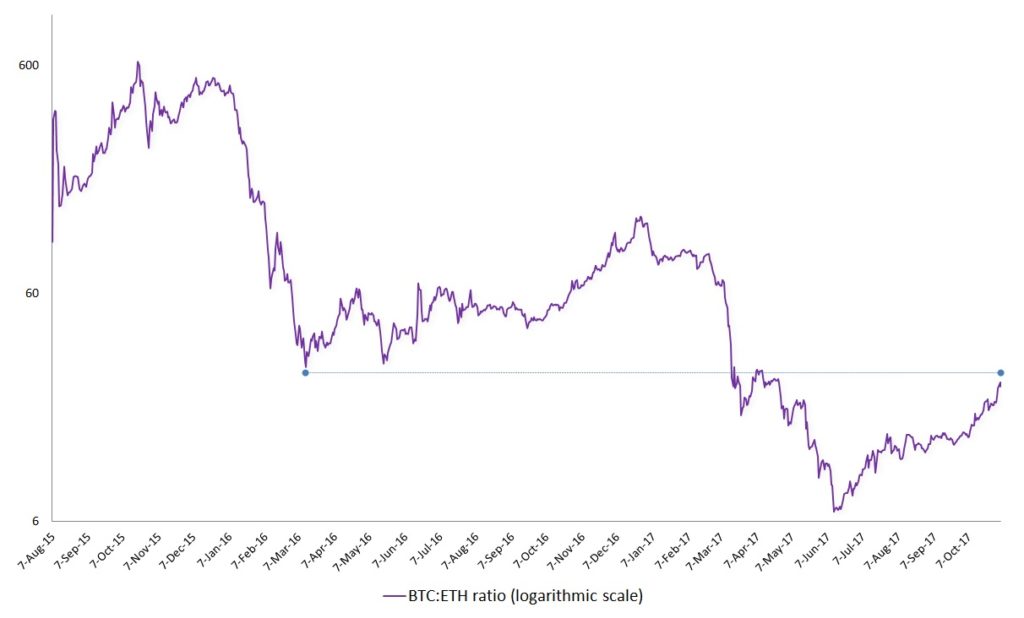 Since the late summer of 2015, the ratio of Bitcoin relative to Ethereum prices has been getting tighter; that is, the gap between the number one and two ranked cryptocurrencies is closing. As we move forward, I expect the current 23:1 ratio to fall first to low double-digits, and eventually into single digits. This would imply that Ethereum prices would rise at a higher velocity than Bitcoin prices.

Such a setup makes perfect sense from a technical perspective as well. Note that as Bitcoin jumped to its current record-busting level, Ethereum prices stayed relatively flat, leading to an increase in the ratio. However, the 23:1 ratio used to represent long-term support. Now, it’s a resistance ceiling, one that is unlikely to be breached.

Please note that as Ethereum prices bang up against this resistance, they’re also charting a bullish pennant formation. At exactly the same time, we have two technical indicators pointing towards a significantly higher valuation for Ethereum.

At this juncture, I believe the smart money is on the smart contract-based cryptocurrency. Bitcoin is a store of ultimate, digital value. Ethereum has now taken the mantle as the quality name with the most growth potential.