The Limitations of Capitalism

Throughout my life, I’ve had a love-hate affair with organized religion. Finally, I figured out why. Religious leaders, particularly Christian ones, only care about personal behaviors. Thus, nothing actually gets done — doctrines are limited to a binary, sinner/saint relationship. And so it is, I find, with our relationship with capitalism.

Like our political system, we have two choices in how we interpret economic systems: capitalism good, everything else, bad. Of course, nuances to this statement exist. But throughout much of American history, society has imposed this binary thought process.

One only needs to look back at recent history to understand this point. Most tragically, we have waged hot wars that have caused bloodshed and untold destruction of families. However, this price was necessary, we are told, to stop the tide of communism.

Indeed, we hate so much any challenge to capitalism that we ask those seeking American citizenship if they’ve ever been members of the Communist Party. These question don’t really do anything in and of themselves. But they seek to reinforce the virtues of capitalism, if only to denounce other ideologies.

Now, I’m not suggesting that socialism or competing economic systems are superior to capitalism. In my view, our economic system is unprecedented in scope, prominence and transparency.

Still, I also believe that we’re reaching the limits of what this supposedly free market economy can offer.

Capitalism Is Not an Independent Catalyst

One assumption about capitalism is that it operates independently of social mores. That is, we assume that if only other countries adopt capitalism, they’ll finally see the light. That would work if capitalism had its own inherent virtues. However, I now believe that economic systems reflect the values of the people that implemented them.

In other words, capitalism itself makes assumptions: it can function perfectly well so long as the people agree to the mores that make it work. To dive a bit deeper, socialism can function at least reasonably well, again as long as the people consent to making it work. The rise of China is a perfect example of how a communist government doesn’t necessary mean a failing economy.

Furthermore, just the implementation of capitalism doesn’t mean that the underlying country’s economy will succeed. I think we’re seeing that right now. As presidential candidate Andrew Yang loves to say, Amazon and its ilk blasted away countless retail jobs. Now, you may not agree with Yang’s politics nor his solutions, but he’s right: technological progress has eliminated jobs that are no longer relevant in the 21st century economy.

And as technology rises, it invariably consolidates big businesses into fewer and fewer players. Therefore, we’ll have an elite few rise to the top and everyone else in abject poverty.

Of course, we should combat this horrible development. But we’re so mired in the left-right binary paradigm that we can’t even name the problem. I guess that is the elite’s goal all along. 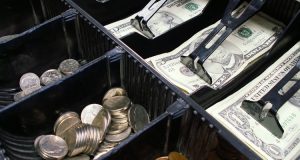