Failures of G-20 policies are causing a rethink in monetary policy. Central Bank gold reserves are increasing month over month as China and Russia continue to accumulate. Although a global-wide policy change has not been adopted, many countries are doing the logical thing and increasing reserves. Western financial power hoped to banish gold from the monetary order over time, but this has not happened due to the economic progress by ex-communist states.

“Western financial markets have hardly begun to grasp the wider implications of the shift in economic power from the heavily-indebted welfare economies to China, Russia and other members of the Shanghai Cooperation Organization, and their consequences for gold.” – Alasdair Macleod

Welfare states like the U.S. rely on money and credit to hide the cost of government spending. Countries driven by this welfare model denounce gold with propaganda because gold cannot be printed, nor expanded with reckless abandon. Western propaganda has led to institutions in the East such as the Shanghai Gold Exchange. Exchanges like these have increased the demand in the East because they do not settle in futures, deferred settlements, and unallocated accounts. The East supplies physical bullion and not a paper contract. Shanghai Gold Exchange wholesale demand has reached 13,213 tonnes since the beginning of 2008, which is an average of 1,450 per year. Asian populations accumulate this metal to maintain purchasing power and to undermine Western monetary policy. 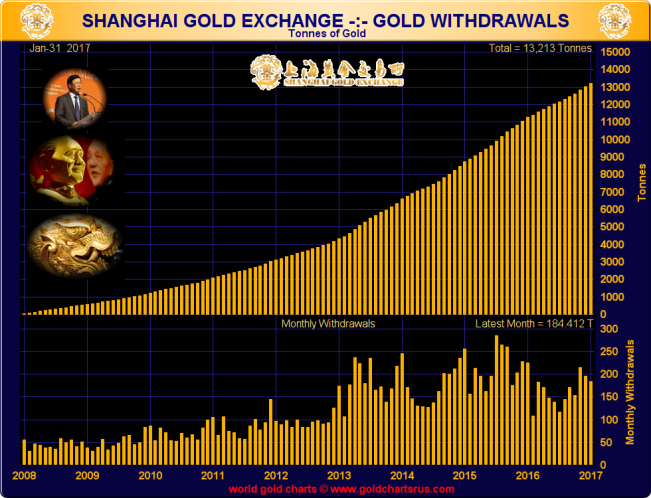