Times are very interesting around the globe. Fears of a global slowdown are definitely warranted. Month-over-month data is slowing drastically, sparking fears of the dreaded “R” word. Recessions are a natural phenomenon that Mother Nature needs in order to recycle the excess, but mankind does not like to reduce excess.  Mankind likes to think it has control, but at some point, man can’t delay the inevitable forever. Artificially-low interest rates and accommodative central bank policy have kept this expansion going for much longer than anyone could have imagined.  Shipping metrics, manufacturing data, and retail sales have fallen off of a cliff. Corporate earnings are declining, and corporate insiders are selling stock at an accelerating pace. Executives see the writing on the wall and are not optimistic about what they see down the road.

According to Challenger, Gray, and Christmas Inc., 172 CEOs exited their positions across many sectors in October. In 2019, 1,332 CEOs have left their positions. The report shows that since these reports began in 2002, CEOs have never left at this pace at any other point in a calendar year. During the Great Financial Crisis, 1,257 CEOs left their positions, which is still less than the 1,332 this year.  As you would expect, the biggest decline from October came from the retail world. Of the 172 CEOs that left in October, 57% of them were in retail. According to Jeffrey Sonnenfeld, a senior associate dean of the Yale School of Management, CEOs are now on a shorter leash. “When the puffery and the rhetoric doesn’t match reality, the boards are under pressure to hold the CEOs accountable.” 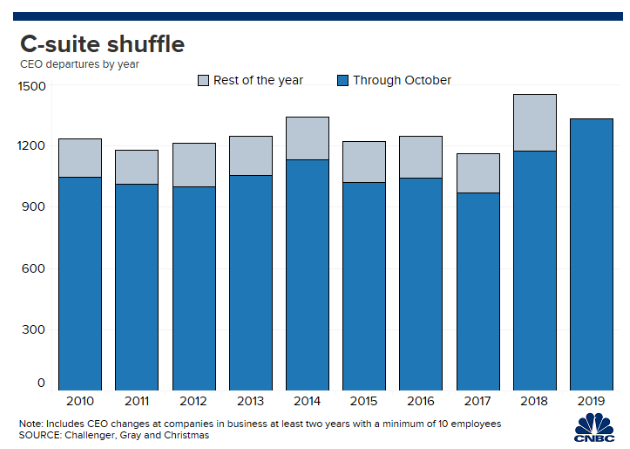 Andrew Challenger of Challenger, Gray, and Christmas Inc. stated, “growing uncertainty surrounding global business and market strength is why companies are choosing this moment to find new leadership and is no coincidence.” A recent survey of 225 CFOs found that 53% believe that the U.S. will be in a recession by Q3 2020 and 67% by Q4 2020. According to the Bank of America Merrill Lynch global fund manager survey, 38 out of 100 global managers see recession in 2020. When discussing the global outlook, CFOs are pessimistic as to where global growth will come from. China has been picking up that slack for several years as the rest of the world has slowed down, and now China is slowing down as well, so where is that growth going to come from? They are all betting on lower rates and help from the central bank. 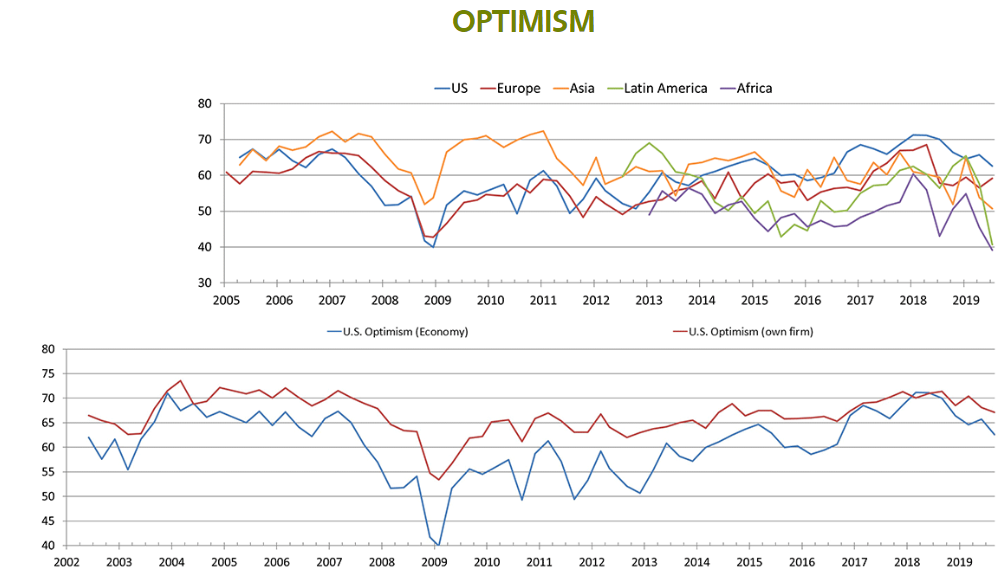 The argument that I hear quite frequently is the need for fiscal stimuli. Trump got his tax cuts already, and deficits have increased everywhere. We saw an initial bump up, but the effects have worn off. Now you see the Fed pumping liquidity into the market with new all-time high after new all-time high, coincidentally happening after the liquidity injections. Liquidity drives markets. Increasing government deficits, social entitlements, and obligations show the 2020s will be one hell of a decade. Stanley Druckenmiller recently did a presentation at Bowdoin College to help show that the boomers are stealing from the millennials. Based on his chart package, if you take the present value of all current liabilities, the real present value is over $200 trillion. In 2025, the interest expense on the debt will be the entire U.S. budget. Diversifying out of paper assets and into hard assets is a must. Got gold and Bitcoin?