Many market commentators have warned of the risks associated with cheap money. Cheap money is a steroid of any bull market, and when risks become too great, speculators are subject to the wrath of equilibrium. The Great Recession forced governments and banks to fight off normal equilibrium until a future date. The day of reckoning will come sooner than later, mostly because cheap money is becoming more expensive. If the Fed really does raise the Fed funds rate another 1.25% from 2.25% to 3.5% by the end of 2019, the equilibrium grim reaper will rear its ugly head. 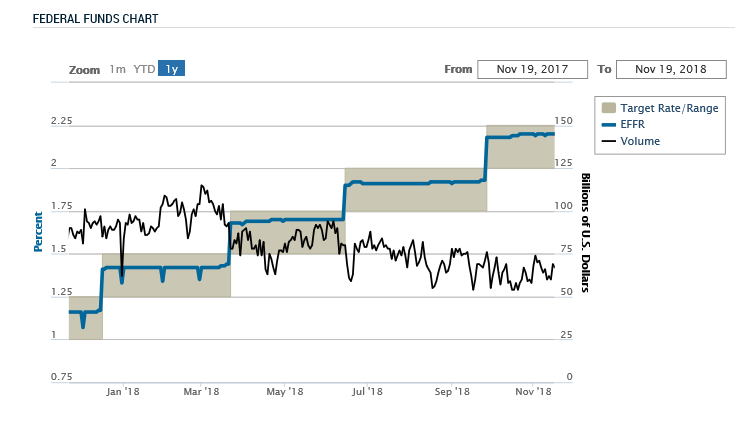 This brings me to some more interesting but not surprising news regarding leveraged loans. Leveraged loans are loans that a group of banks issue together to companies whose credit ratings are low or are heavily indebted. According to the IMF, leveraged loans have reached and surpassed the levels in 2007-2008. 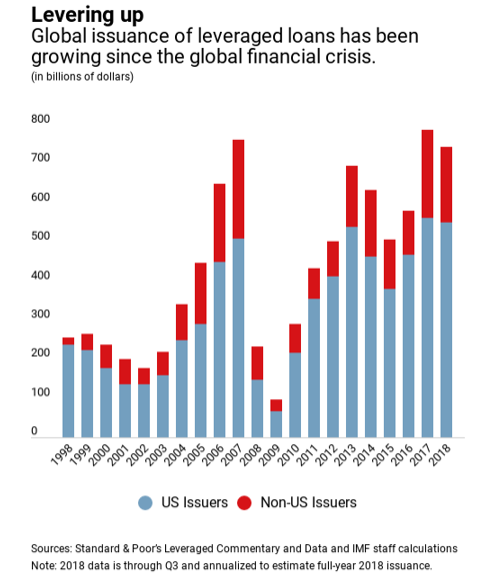 Leveraged loans peaked at $762 billion in 2007; in 2018, that level has already hit $782 billion. More than half of this year’s total involves money borrowed to fund mergers and acquisitions, leveraged buyouts, dividends, and share buybacks. If there were some sort of endogenous shock, what might happen to financial stability? 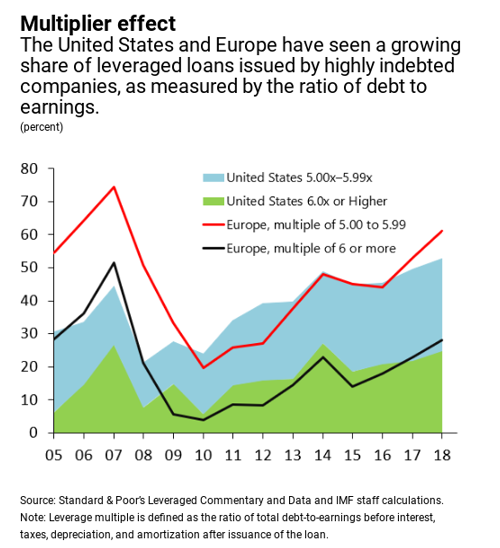 Something new to me are covenant loans. Covenant loans are loans that limit the maximum debt-to-asset ratio a borrower can have, as well as requiring a borrower to only perform certain actions in the loan, which will limit the downside of their ability to repay the loan. Since the crisis, covenant-lite loans have increased to the most speculative of institutional clients. 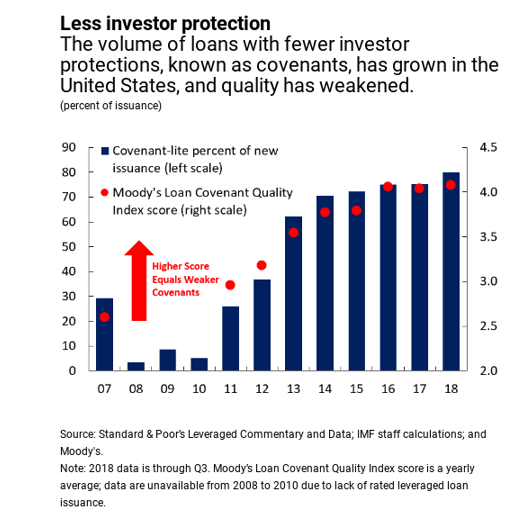 Based on this chart, covenant-lite loans were roughly 30% in 2007 and are 80% in 2018. Moody’s also indicates that covenant quality scores have gradually increased, which means the quality of the loans has decreased.

“With rising leverage, weakening investor protections, and eroding debt cushions the average recovery rates for defaulted loans have fallen to 69% from pre-crisis average of 82%. Pre-crisis indicators that led to the financial chaos are all back and are all higher than they were then.”

Since all these big companies have been buying back their shares, that has put a floor under equity markets for the last several years. If I am a CFO of XYZ company and I know I can take out a loan at a cheap rate to reinvest it, why wouldn’t I? Mr. Smith can go get a loan to repurchase the shares, which reduces the share count and boosts the price. Executives get paid in stock, so Mr. Smith just made sure he got paid handsomely. The loan interest can get written off. Goldman Sachs predicts the S&P 500 will have $940 billion of stock buybacks in 2018. With all these leveraged loans, credit default swaps, and collateralized loan obligations outstanding, there will be pain. With equity prices struggling in 2018, many firms are already underwater on buybacks. The Four Horsemen of the Debt Apocalypse are on the horizon.