Congress On The Blockchain Revolution

Everywhere you look globally, things seem to resemble entropy more than anything else. Geopolitics make you question what your existence on this planet will be like. Mainstream media has a representation of this existence, and alternative forms of information have another. Confusion keeps you guessing about how to interpret these, and which ones to even bother with. Politicians and government economists provide one set of data, while private citizens and economists provide another. For some of you, entropy may bring question marks to mind, and others may think of Earth as a system with so many complex outcomes that any reliability is futile. What is reliable is the fact that you know there won’t be much reliability in anything. With that philosophic note, I ponder the last year or so in blockchain technology. Governments usually follow the private sector in terms of adoption of anything at a rate that would make my tortoise resemble a Ferrari. Lately, you hear governments talking down the technology, while Budweiser, Microsoft, and IBM have begun implementing it.

Congress released its Joint Economic Report recently, which detailed the macroeconomic past and future. The Joint Economic Report was organized by Congress’ Joint Economic Committee, the House of Representatives, and the Senate. What was intriguing is that for the first time, there was an entire section in regards to blockchain tech and cryptocurrency. In the report it called 2017 “the year of cryptocurrencies,” and it also mentioned that “Bitcoin” was Google’s second most popular searched topic of 2017.  Interestingly enough, the report goes on to describe the significant gains of Bitcoin (1,100%) and Ethereum (6,713%) versus the Dow jones Industrial Average and the S&P 500. “The Dow Jones Industrial Average started 2017 over 19,881 points and grew 24% to 24,719; the S&P 500 grew by more than 17%.” Statistics regarding the total market capitalization of cryptocurrencies were included, as well as the robust gains of Ripple and Litecoin. Recommendations from the report stated that the technology could protect the nation’s economy from cyber threats and enhance the nation’s digital infrastructure. “Policymakers, regulators, and entrepreneurs should continue to work together to ensure developers can deploy these new blockchain technologies quickly and in a manner that protects Americans from fraud, theft, and abuse, while ensuring compliance with relevant regulations.” 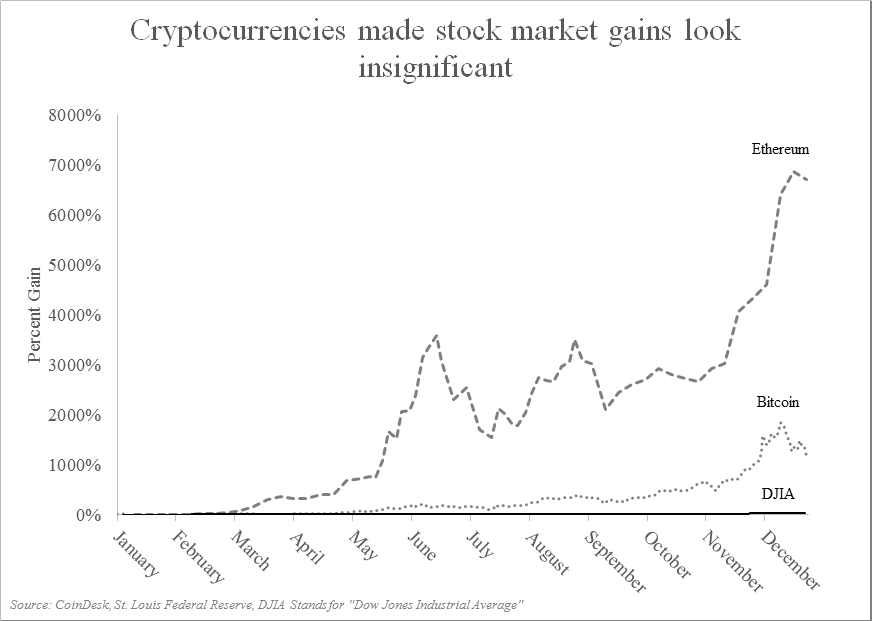 On that note, as you would expect, they are referring to ICOs and the fraud that has occurred in that market. According to the report, $5.3 billion was raised for new token companies in 2017. Acknowledgement was made that an ICO is much more economically feasible in this environment than a traditional IPO. According to PricewaterhouseCoopers, IPOs cost companies 4-7% of all capital raised and an additional $4.2 million in accounting costs. Additionally, PricewaterhouseCoopers found that it costs between $1 million and $2 million annually to maintain status as a public company. An ICO can be created by anyone that can get a platform and enough people behind it. Interesting developments have been and will continue to be made. 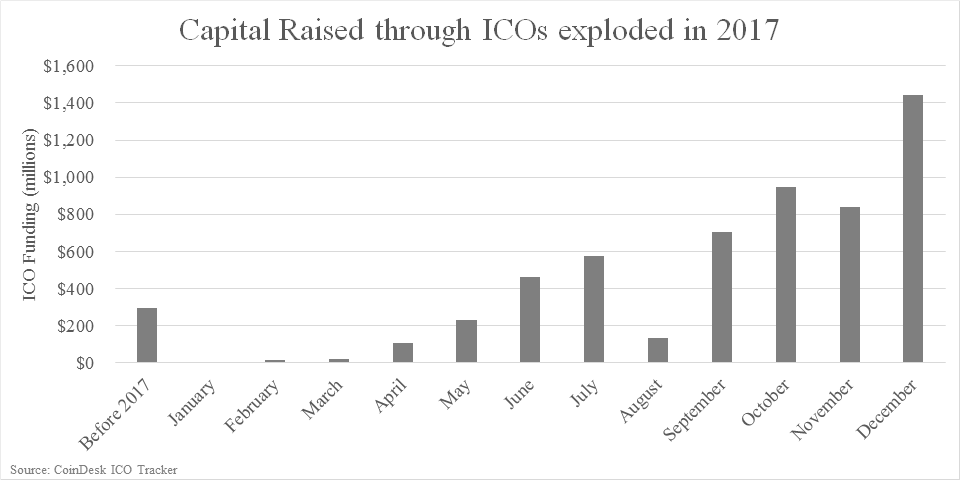