I fondly remember the times my sister and I would play Monopoly. Sometimes the game lasted several days and grandma’s kitchen table was where we left the board, with a guarantee that nothing would move overnight. It was a great game for kids to experience a taste of capitalism complete with cash, homes, private property, bills, jail, and taxes. Back in the day, our classic original board included a 10% or $200 income tax and a $75 luxury tax. Recent versions of Monopoly have replaced the luxury tax with a super tax, also known as the #WallStreetTax or #RobinHoodTax on others people’s money (OPM) in the 21st-century socialist media sphere. 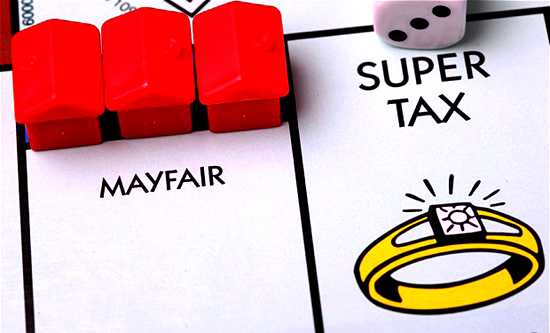 The current pack of Congress critters in the House have resurrected a super tax idea that resurfaced when Bernie Sanders campaigned for the presidency in 2015.

What would Bernie Sanders Wall St. tax look like?… “Mr. Sanders’s plan isn’t to ask Wall Street for money. It’s to demand it in the form of a financial-transaction tax (FTT)… Mr. Sanders wants to use funds raised by this tax to pay for his college-education agenda, which includes making public colleges free, cutting interest rates on student loans and increasing financial aid. The costs of these proposals–$75 billion per year by Mr. Sanders’s count–could be fully paid by the tax, according to Mr. Sanders. Under a bill Mr. Sanders introduced last May, investors would be required to pay an excise tax on any transfer of a stock, bond, partnership interest or derivative. Stock trades would incur a 0.5% tax rate, or $5 for every $1000 of stocks traded. Bond trading gets a 0.10% tax rate. Derivatives a 0.005% tax rate.” – MarketWatch, Feb. 2016

More recently, the Congressional Budge Office (CBO) opined for a tax scheme listed under options for reducing the deficit from 2019 to 2028.

Impose a Tax on Financial Transactions… “This option would impose a tax on the purchase of most securities and on transactions involving derivatives. For purchases of stocks, bonds, and other debt obligations, the tax generally would be 0.1% of the value of the security. For purchases of derivatives, the tax would be 0.1% of all payments actually made under the terms of the derivative contract, including the price paid when the contract was written, any periodic payments, and any amount to be paid when the contract expires. (Such payments are generally just a small fraction of the derivatives’ notional value.) Trading costs for high-frequency traders tend to be very low—in many cases less than 0.1% of the value of the securities traded—so this option would generate a notable increase in trading costs for them.” – CBO, Dec. 2018

The Democrats have been talking about taxes a lot lately, from Sen. Elizabeth Warren’s wealth tax to proposals related to corporate stock buybacks. Now we have Sen. Brian Schatz from Hawaii advocating the Wall Street Tax Act legislation to impose an FTT that mirrors the CBO proposal. Under the legislation, sales of stocks, bonds, and derivatives would be taxed at a rate of 0.1%. The tax would apply to sales made in the U.S. or by U.S. persons, and initial securities issuances and short-term debt would be exempt. Senators Chris Van Hollen, Jeff Merkley, Kirsten Gillibrand, and Alexandria Ocasio-Cortez are co-sponsoring the bill. Their expectation is to raise nearly $800 billion over the next decade and suppress speculation and nefarious activity within financial markets.

An FTT ultimately results in a tax pyramid scheme that taxes the same economic activity multiple times. As an example, a day trader or individual investor sells a security worth $1,000 and buys a different stock in a new company with the same $1,000. The same $1,000 along with similar transactions taking place thousands of times per day would be taxed twice and then some.

Several studies conducted over the years debunk claims that such an FTT would reduce volatility. Canada studied an FTT and found “little evidence to suggest it would reduce speculative trading or volatility. In fact, several studies conclude that an FTT increases volatility and bid-ask spreads and decreases trading volume.” Sweden’s FTT imposed during the 1980s resulted in a 60% decrease in trading volume and revenues fell off a cliff. The recent CBO proposal noted that FTT would immediately lower the value of financial assets, and the amount of revenue created depends upon how much financial transactions declined in reaction to such policy. According to the nonpartisan Tax Policy Center, a 0.1% tax would reduce volume by 24% in the first year and even further in the future. Much of that reduction would likely come from discouraging high-frequency trading (HFT) and speculation.

Even investors that do not trade often and focus their capital on passive mutual funds would feel the pain. Mutual funds must buy and sell securities for portfolio adjustment and redemptions, and expenses for equity index funds would surely increase by a substantial amount.

A study conducted by the Brookings Institution in 2016, succinctly lays out the pros and cons of an FTT.

Proponents advocate the FTT on several grounds. The tax could raise substantial revenue at low rates because the base — the value of financial transactions — is enormous. A FTT would curb speculative short-term and high-frequency trading, which in turn would reduce the diversion of valuable human capital into pure rent-seeking activities of little or no social value. They argue that a FTT would reduce asset price volatility and bubbles, which hurt the economy by creating unnecessary risk and distorting investment decisions. It would encourage patient capital and longer-term investment. The tax could help recoup the costs of the financial-sector bailout as well as the costs the financial crisis imposed on the rest of the country. The FTT — called the “Robin Hood Tax” by some advocates — would primarily fall on the rich, and the revenues could be used to benefit the poor, finance future financial bailouts, cut other taxes, or reduce public debt.

Opponents counter that a FTT is an “answer in search of a question” (Cochrane, 2013, p. 44). They claim it would be inefficient and poorly targeted. A FTT would boost revenue, but it would also spur tax avoidance. As a noncreditable tax that falls on intermediate inputs in the production process, it would cascade, resulting in unequal impacts across assets and sectors, which would distort economic activity. Although a FTT would curb speculative trading, it would also curb productive trading, which would reduce market liquidity, raise the cost of capital, and discourage investment. It could also cause prices to adjust less rapidly to new information. Under plausible circumstances, a FTT could actually increase asset price volatility. A FTT does not directly address the factors that cause the excess leverage that leads to systemic risk, so it is poorly targeted as a corrective to financial market failures of the type that precipitated the Great Recession. Opponents claim that even the progressivity of a FTT is overstated, as much of the tax could fall on the retirement savings of middle-class workers and retirees. 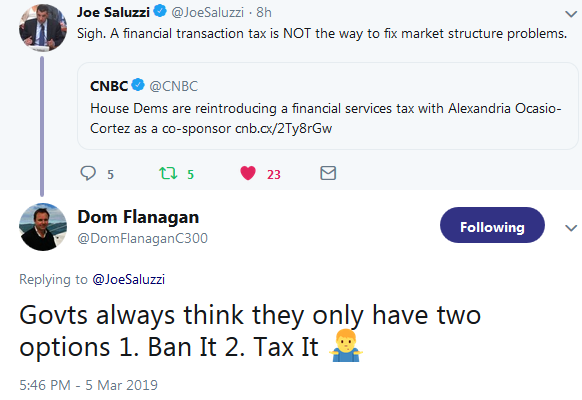 Who already pays the majority of taxes in the U.S.?  The fact that wealthier folks pay the most from a tiny percentage of the population, clearly debunks the crybabies. 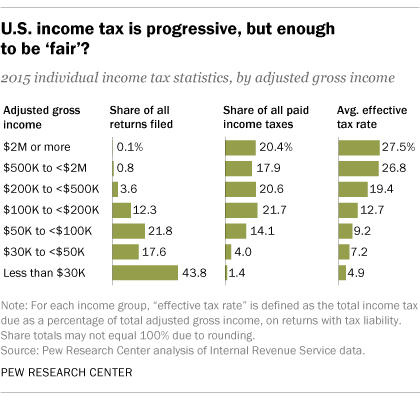 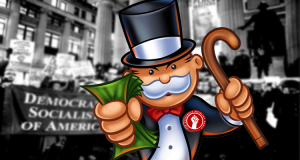