Debt levels around the globe look like something out of a horror movie rather than the reality we all live through on a daily basis now. There are countless documents provided to us via many governmental agencies that give us a look into how bad the financial situation really is. This glimpse is just that: a glimpse. Most people throw around the national debt as a reason to be concerned. Yes, that should give everyone a reason to pause, but how many people realize the national debt is demonstrably higher than the $22 trillion that is repeatedly thrown in our face? We hear how Reagan was a fiscal conservative, but in reality, he increased spending quite drastically compared to GDP. Military spending was increased heavily during the 1980s to beat the Russians. Clinton and Bush Sr. kept the budget in reasonable shape until we got to Bush Jr.

Bush Jr. doubled the national debt to then have Obama double the national debt again. Obama and Bernanke were best buddies. Trump will most likely double the debt again or increase it until the system collapses by 2025. It’s pretty apparent that the FED is doing everything it can to hold down borrowing costs to keep this game going. By 2025, the interest on the debt will be the entire U.S. budget. These numbers are just the numbers on the surface. Every once in a while, some research comes out that makes you sit there and force yourself through the minutia. This report from CNBC is quite alarming and not at all surprising in the slightest. According to AB Bernstein, the U.S. debt-to-GDP ratio could be as high as 2,000%. The largest portion of the debt comes in the form of social entitlements.

If you have listened to Alan Greenspan for the last several decades, you know exactly why this is part of the problem. This number includes bonds, financial debt, Social Security, Medicare, and public pensions. Debt levels are dire according to Carlsson-Szlezak, Chief Economist at AB Bernstein, but it doesn’t mean that a debt crisis is looming. He basically summed the situation up as being that just because debt is high, that doesn’t mean that it can’t be serviced into the future. The ability to pay in different conditions is what is key. In the past, small amounts of debt could be paid because of leverage. Statistics show that the federal debt to GDP is 106%. Debt held by the public is $16.7 trillion, or 78% of GDP. Public debt is expected to rise to 105% by 2028. 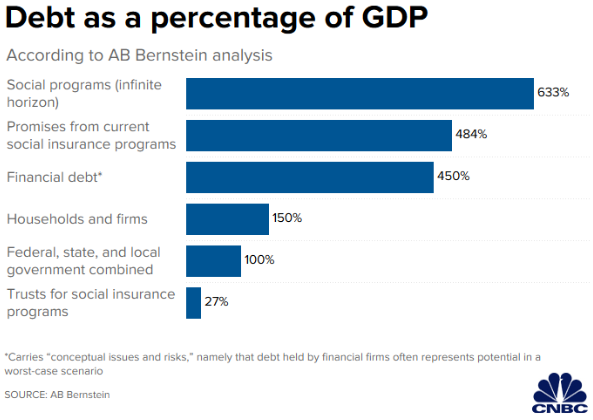