Declines in Advertising Revenue are a Precursor to Recession

In order for capitalism to function, corporations and small businesses must let consumers know they are still in business, having a sale, or promoting new products into the pipeline. The advertising revenue generated is a common denominator that consists of a wide range of industries, providing a well-rounded measurement of the general health of an economy.

Once upon a time, I was gainfully employed from the late ‘80s into the early ‘90s at a highly respected magazine publication based in New York City.  It was an amazing opportunity after graduating from college, and was also a time of tepid optimism in the economy following the 1987 “Black Monday” stock market crash.  The hustle and bustle in mid-town Manhattan appeared to be business as usual, as well as at the office.  But lurking in the headlines was news about advertising dollars drying up across the board that soon became a topic of discussion for several months amongst my co-workers. What magazine or newspaper was going to close down next?  Within a year of the carnage in print media, a recession officially began in July 1990, and it ended in March 1991.

Let’s fast forward to the 21st Century.  Keep in mind that the Great Recession began in hindsight during December 2007 and lasted until June 2009.  Goldman Sachs was forecasting a light recession.

“Newspapers, magazines and radio, already reeling from an ad recession, may be headed towards even lower ad expenditures on the horizon. Goldman Sachs said today that newspapers earnings and revenues would accelerate in a recession. Sachs also forecast separately that the United States economy is headed into a light recession this year.” – Adweek, January 2008

The recession in advertising.  Nothing to shout about… “WE LED into the downturn, we’ll lag the upturn. Overall, it’s very tough, says Sir Martin Sorrell, boss of WPP, a big advertising group.  Advertising budgets tend to be one of the first things cut when times get difficult, he sighs, though it often costs firms more in the long run to recover the resulting lost ground.” – The Economist, July 2009

We’re now into the years 2016-2017, as the Federal Reserve has begun raising interest rates into weakness and Fed-speak is describing some of those economic conditions as only “transitory.”  Digital media is definitely not the savior for advertising, and consumers everywhere are fed up with the intrusion of ads in their daily Internet experience.

Print is Dying, Digital is No Savior: The Long, Ugly Decline of the Newspaper Business Continues Apace – WGBH, January 2016

Look out below: Cuts underway as advertising tumble accelerates… “Earnings reports from across the industry show newspapers are in even worse trouble than previously understood.  The problem:Print advertising revenue has taken a sudden tumble, the worst pullback since the Great Recession… One reason for the decline is a shift, of both readers and ad buyers, from print to digital.  The New York Times saw digital revenues grow by 21 percent, and Gannett said its national digital advertising rose 18 percent.  The problem for publishers is that digital revenues have not come close to replacing their dead tree counterparts, a familiar refrain for journalists.” – Columbia Journalism Review, November 2016

U.K. Newspapers Fight Falling Ad Revenues – New income sources sought as ad spending slows… “It is not front-page news that print media—and particularly newspapers—are suffering from falling ad revenues… Consumers, meanwhile, grow evermore frustrated by the perceived intrusion of ads in the digital news content they access, which has fueled a rise in ad blocking behavior. News brands have had to respond in various creative ways in order to monetize their digital products.” – eMarketer, March 2017

Twitter revenues decline for first time as advertising falls away – The Guardian, April 2017

Here is a startling graphic from Pew Research. Look at that plunge taking place in newspaper advertising. I drew vertical black lines to indicate official recession starts.  We’re definitely getting close to another “official” recession within the current depression. 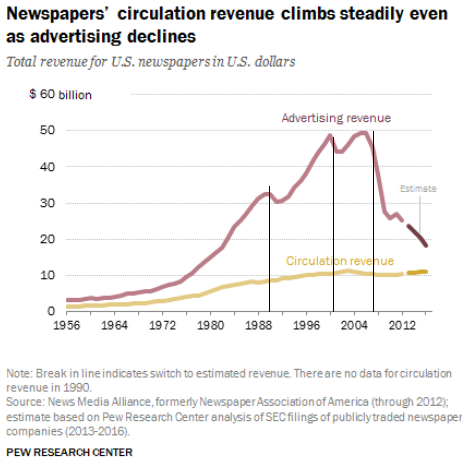 Despite subscription surges for largest U.S. newspapers, circulation and revenue fall for industry overall… “Yearly financial statements show that The New York Times added more than 500,000 digital subscriptions in 2016 – a 47% year-over-year rise.  The Wall Street Journal added more than 150,000 digital subscriptions, a 23% rise, according to audited statements produced by Dow Jones.  And the Chicago Tribune added about 100,000 in weekday digital circulation, a 76% year-over-year gain.  But these gains did not translate into circulation growth for the industry overall.  A Pew Research Center analysis of data from AAM shows that total weekday circulation for U.S. daily newspapers – both print and digital – fell 8% in 2016, marking the 28th consecutive year of declines… Total weekday circulation for U.S. daily newspapers fell to 35 million, while total Sunday circulation declined to 38 million – the lowest levels since 1945… gains in circulation revenue have not been nearly enough to make up for losses in advertising revenue – a pattern that holds true even at the large newspapers and major chains.” – Pew Research Center, June 2017

I cannot end this post without a dose of the great Crazy Eddie!