Aside from crippling student loan debt, the rising rental market poses the biggest problem for young working Americans. In seemingly every major employment hub, rents have increased significantly, and in some cases dramatically. As such, millions of Millennials and the emerging Generation Z are starting off with their backs against the wall.

One of the more disturbing pieces of evidence regarding the skyrocketing rental market is from the Federal Reserve Economic Data. According to the consumer price index of rental prices in major U.S. cities, rentals ballooned shortly following the Great Recession.

Worryingly, though, this is not an issue merely impacting one generation. Instead, many Americans of any age have either chosen not to buy a home or were unable to do so. Because the rental market is subject to underlying factors such as the economy, they’re variable. And in recent years, they’ve been variable to the upside, hurting the most financially sensitive individuals.

However, when viewing the CPI of rental prices from a logarithmic scale, I discovered that generally speaking, prices tend to move in bullish or bearish cycles relative to long-term averages. 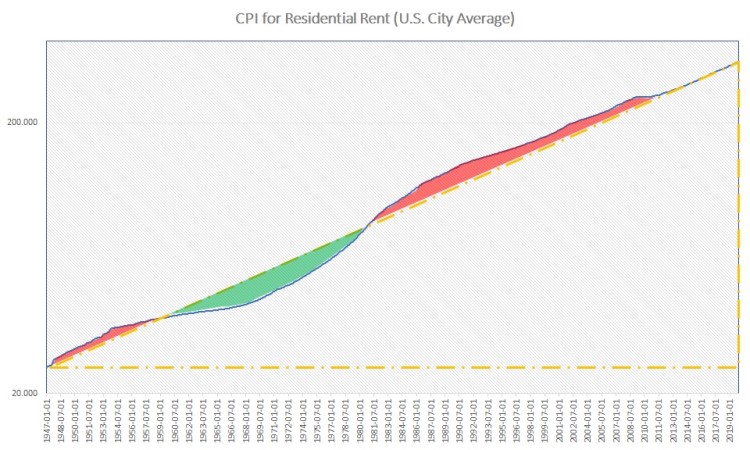 For instance, in the mid-to-late 1940s to the late 1950s, the rental market exceeded forward long-term averages. Then, in the 1960s through the 1970s, prices were relatively deflated. Finally, from the 1980s onwards, prices are back to being inflated.

If we’re following the cycle of the rental market, prices should start deflating and fairly soon. And that couldn’t come at a better time for people who are prepared to take advantage.

There’s a couple of points here that I think are relevant. First, note that the most recent overinflated period covers approximately 30 years. If we assume a generation is 15 years in length, this essentially means that Millennials and Gen Z were born entirely in a period of rising rental prices.

That by itself is likely not a sustainable trend. Thus, the generation born after Gen Z may experience a period of declining rental prices.

Second, the concept that we will see a correction in real estate makes logical sense. Although rents have skyrocketed, wages have more or less stagnated. We’re approaching a system that only houses the rich. Such wealth disparities historically have not ended well.

Third, much of the rising housing costs are of course associated with an inflated dollar. But the rental market suggests that this too is not a sustainable course. And why should it? No society has ever printed its way to prosperity.

Finally, though, the good news: if you’re in the market for a home, you may want to consider what next year has in store. The data suggests that we may finally see an attractive entry point.