Don’t Panic Over the “Bitcoin Collapse”

Christmas is the season of giving, but recently, the bitcoin price has been giving nothing but headaches. From a high of nearly $20,000, the king among cryptocurrencies has slipped to a current range between high-$13,000s to low-$14,000s. Unlike other prior corrections, this bitcoin collapse has lingered uncomfortably.

But before you panic, we should put the “blockchain markets” into perspective. It was only last month that the bitcoin price soared to a previously unimaginable $10,000. From there, it quickly attacked $15,000, then $20,000 before falling short. Thus, I find it difficult characterizing the current correction as a “bitcoin collapse” since we’re still nearly 40% above the five-digit milestone.

In addition, public sentiment has shifted significantly toward cryptocurrencies. While the mainstream media badmouths the present bitcoin collapse, they can’t take away from the fact that major blockchain alternatives have broken all-time record valuations. The bitcoin price, as it turns out, is now only one piece of the blockchain puzzle.

However, the biggest argument against panicking about the bitcoin collapse is that this is par for the course. You may have heard that the volatility is a direct result of traders shorting bitcoin in the futures market, or that people have given up on cryptocurrencies altogether. Instead, the bitcoin price had simply risen too far, too fast: a correction was inevitable. 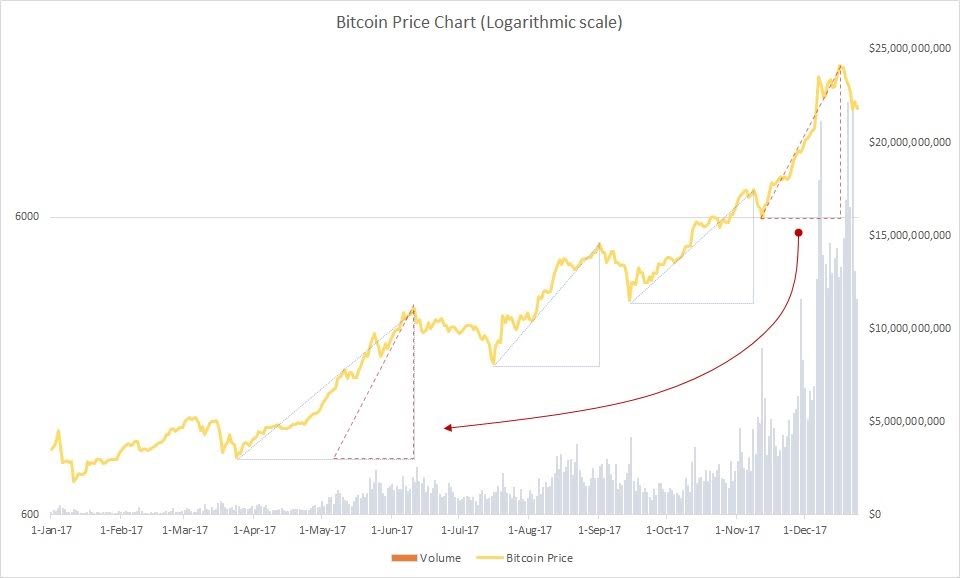 Consider this logarithmic-scaled bitcoin price chart. From approximately mid-November to mid-December of this year, the digital token made the highest magnitude jump from defined trough-to-peak. The price move was nearly identical to the trough-to-peak move from mid-March to early-June. However, the mid-November price action occurred in roughly half the time.

Naturally, a correction was in order. Moreover, we should probably expect valuations to remain deflated for quite some time. A healthy bull market needs to consolidate its gains before rising to new record levels.

But investors (even those that got in near the highs) shouldn’t despair for too long. Once the bitcoin collapse works itself out, the next leg up should be explosive. A $20,000 bitcoin price might even be regarded as a discount considering where the digital token ends up next.