Doomsday Preppers Have Their Day in the Sun

With the coronavirus rippling through new countries and regions, fear has jumped to an all-time high. Not only that, the U.S. reported its first death related to the virus. In response, the Trump administration announced new travel restrictions against Iran, Italy and South Korea – countries that the coronavirus hit hard. As such, we’ve seen a rise in what most people regard as a niche and peculiar subsegment: doomsday preppers.

A few years ago, a popular cable TV network followed the lives of a select few doomsday preppers. Overwhelmingly, they cited the breakdown of moral values in society, as well as economic pressures as the catalyst for their life philosophy. Naturally, it’s good to be prepared. However, doomsday preppers go a step beyond, investing their money into stockpiles of emergency goods. The wealthiest among them fork over up to a million dollars for fortified bunkers.

To be fair to the preppers, the need for stockpiling emergency gear has skyrocketed. According to one estimate (and reported by NBC News), some retailers could see empty shelves by mid-April. Now, let’s back up a bit: this worrying forecast includes all retailers, such as digital goods which China-based supply-chain woes obviously impact.

So, we’re not just talking about a run on grocery stores, although that is a very real possibility. To get ahead of the crowd – and American crowds are especially dangerous – you should have your basic needs stocked up.

But should you join the doomsday preppers crowd? Here’s where I urge some caution.

I’m not here to preach about what you should do with your money. However, the risk-reward for prepping for the coronavirus only is very minimal.

For starters, the coronavirus isn’t an obscenely deadly virus like Ebola. Admittedly, no cure or vaccine exists for the coronavirus. However, around 97% of people recover from it. That means basic care protocol, such as plenty of rest and fluids, is enough to beat it for most folks.

Again, I’m all for basic preparedness. But if you really want to defend yourself against the coronavirus, simply avoid mass crowds. In addition – and here’s a biggie – take care of yourself! That means plenty of exercise and avoiding as much as possible a sedentary lifestyle. And that will save you a million bucks.

Second, much of the equipment that doomsday preppers purchase is simply not practical. Have you ever worn a gas mask? It’s not very comfortable at all. How about a full-blown hazmat suit? After wearing one of those for 15 minutes, you’d rather just take it off and chance it.

Ultimately, my recommendation is this: be safe out there but don’t go too crazy. 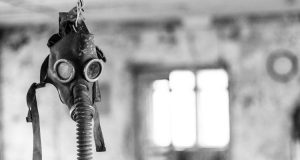