The Dow Gold Ratio Just Hit a Multi-year High, but What Now?

As the markets continue to break new ground, astute investors have noted one potential warning sign: the ratio of the Dow Jones index relative to gold prices recently hit a multi-year high. The so-called Dow gold ratio has been a useful tool to assess the relative valuation of the markets. Its implications today are well worth investigating.

Before we begin, I want to simply state that no technical indicator is a panacea. In this case, the Dow gold ratio is simply the relationship between the Dow Jones and gold prices. The central issue isn’t the ratio itself. Rather, it’s what people are willing to spend for their investment vehicle of choice. If the Dow gold ratio drops to 1:1, this simply means that one troy ounce of gold is worth one theoretical share in the Dow Jones.

The trick here is context. If the Dow gold ratio is indeed 1:1, is this good or bad for the economy? On the basis of the ratio alone, we can’t tell. Should the Dow gold ratio hit over 40:1 as it did during the late 1990s tech bubble, it only implies that investors place more weight on owning stocks than in owning gold. 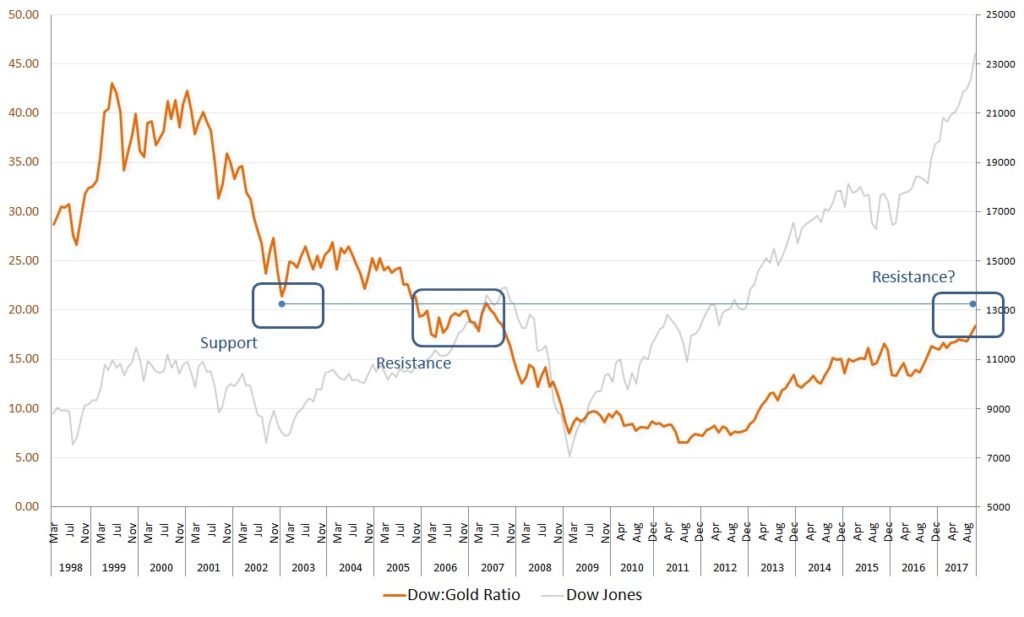 Again, a higher ratio implies that people value stocks over the potential in gold prices. Yet the Dow gold ratio was more elevated during most of the 2000s decade than it is today; in fact, the magnitude differential is very significant (nearly 24:1 throughout the entire decade). That tells us right there that while the markets are experiencing robust sentiment, it’s nowhere near the level of bullishness seen previously.

The disconnect between record-breaking points in the Dow Jones and trader sentiment doesn’t necessarily forecast rising gold prices. However, the Dow gold ratio indicates that bullion markets are far from being irrelevant.

If a majority of investors truly trusted equities, we would see a greater flight out of safe-haven and alternative assets. But the opposite is true. Cryptocurrencies are soaring to previously unimaginable levels. And gold, while not breaking records of its own, is doing well given the circumstances.

Moreoever, I don’t see the Dow gold ratio becoming more skewed in favor of equities. The ratio is approaching 20:1, which in prior years was an important support line,  and then later, a resistance barrier. To decisively break past this established ratio would require the Dow Jones to move much higher from here, or for gold prices to utterly collapse.

Given the instabilities and uncertainties of the global economy, I’m not holding my breath for either event to happen.