Gravity cannot be cheated forever, and the Dow Jones Industrial Average learned that physics lesson the hard way. The benchmark index, along with the S&P 500, lost nearly 2% against Tuesday’s session. But it was the Nasdaq Composite that took the brunt of the damage, shedding nearly 2.6%. The fast-recovering semiconductor sector halted its bullishness, while consumer electronic companies like Apple also slipped unexpectedly.

The common explanation is President Trump; specifically, the turmoil that he allegedly caused. During Trump’s White House meeting with the Russian foreign ministry, he is accused by mainstream media sources to have shared classified information. In addition, the firing of former FBI director James Comey looks suspicious in light of rumors that the President asked Comey to back off the Michael Flynn case.

Wall Street may also be responding to the administration’s general lack of popularity. Fears are prevalent that President Trump cannot achieve traction on his hallmark campaign promises — namely, tax and healthcare reform. If the negative trend continues, mainstream Republicans are susceptible to abandoning the administration. After all, the professional class of politicians — love them or hate them — have their careers to worry about.

These fundamental “resistors” are all valid arguments. And because of that, market technicians are surely fretting about an ominous overhang in the Dow Jones — the dreaded head-and-shoulders pattern.

This pattern comprises of an initial burst of bullishness, followed by a large speculation-driven spike which towers over the first rally. These two dynamics form the first shoulder and the head. The third major price action attempts to reconstruct the prior speculative swing, but falls short of the mark. This is the second shoulder. Not long after that, the market loses confidence, and the entire price action collapses. 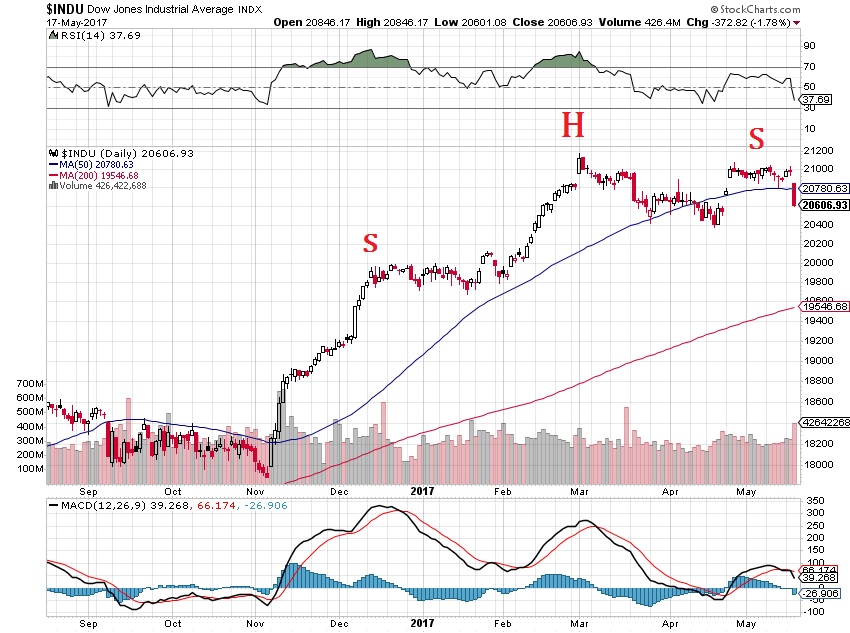 This is exactly what you see in both the Dow Jones and the S&P 500. The first shoulder was formed in the weeks following Trump’s surprise election victory. By the start of the new year, speculation had cooled down a little bit, only to remerge bigly post-inauguration. This resulted in a sharp spike that ended on March 1, representing the head. An attempt to regain that momentum failed in late April through early May.

What we’re witnessing now is the culmination of the head-and-shoulders. And if you have any concern about protecting your financial health, you will want to tread these waters very carefully.

The mainstream business media claim that this is a buying opportunity. Bluntly speaking, that is insanity. You never want to load up on assets just in the aftermath of a shock selloff. Typically, a consolidation will occur, after which will lead to another selloff. It’s good to be a contrarian, but timing matters.

Ultimately, I view this as a minor wake-up call to the traditionalists. Market fundamentals can only be suppressed for a limited time. At some point, the bill has to be paid. What’s worse, the full repudiation of Keynesian economics is still approaching.