The Dow Jones is Flashing a Major Warning Sign: MUST READ!

The election of President Donald J. Trump was a major coup d’etat against the extremist liberal agenda, a victory celebrated not only by conservatives but also independent-minded voters. Another element in Trump’s historic victory was his promise to restore American greatness, specifically as it pertains to the economy. In this, he forwarded much of the talking points generated by the alternative news media.

Superficial signs of the “Trump effect” are easily discernible. The Dow Jones Industrial Average, along with the rest of the markets, are enjoying record-breaking valuations. The Commander-in-Chief, in true Trumpian-fashion, has declared that the “extra” burst of valuation in the markets is a direct result of enthusiasm for conservative, economic policies.

If only it were that easy. Most people know damn well that the Dow Jones doesn’t move so rapidly based on presidential election cycles. Rather, the markets are the culmination of years, sometimes decades, of policies enacted by the Federal Reserve and other high-level agencies.

While the present rally is impressive, let’s not fool ourselves. Whether we like it or not, this rally resulted from the speculative energy generated by quantitative easing (aka Obamanomics). And no, President Trump did not avert a market crash or a broader economic crisis. Irrespective of who won the White House, we were always headed towards a crash.

And right now, the Dow Jones is signaling a devastatingly clear warning sign.

What You See is What You Get

Before we begin our analysis, we must first understand the difference between the arithmetic and logarithmic scale. Most technical analysis charts are arithmetic, which simply means that the chart tracks the nominal price data of a stock or commodity. This is useful when making comparisons over a shorter time period, such as a one-year chart.

But to track something that extends out decades, the logarithmic scale must be used. For example, a 30-year chart of the Dow Jones would not really be feasible in an arithmetic format. Back in 1987, the Dow was trending around 2,200 points. Today, we’re above 21,000 points. You can see the scaling problem here.

The logarithmic chart solves this scaling problem because the scales are consistent with each other. For instance, I’m using a base-10 logarithmic chart. That means the chart is “allocated” on a 10x-scale.

This is the beauty of the logarithmic scale — you can make apples-to-apples comparisons from vastly different eras in the markets.

Having got the housekeeping out of the way, let’s take a look at the long-term, logarithmic chart of the Dow Jones, starting from January 1900 to the present day: 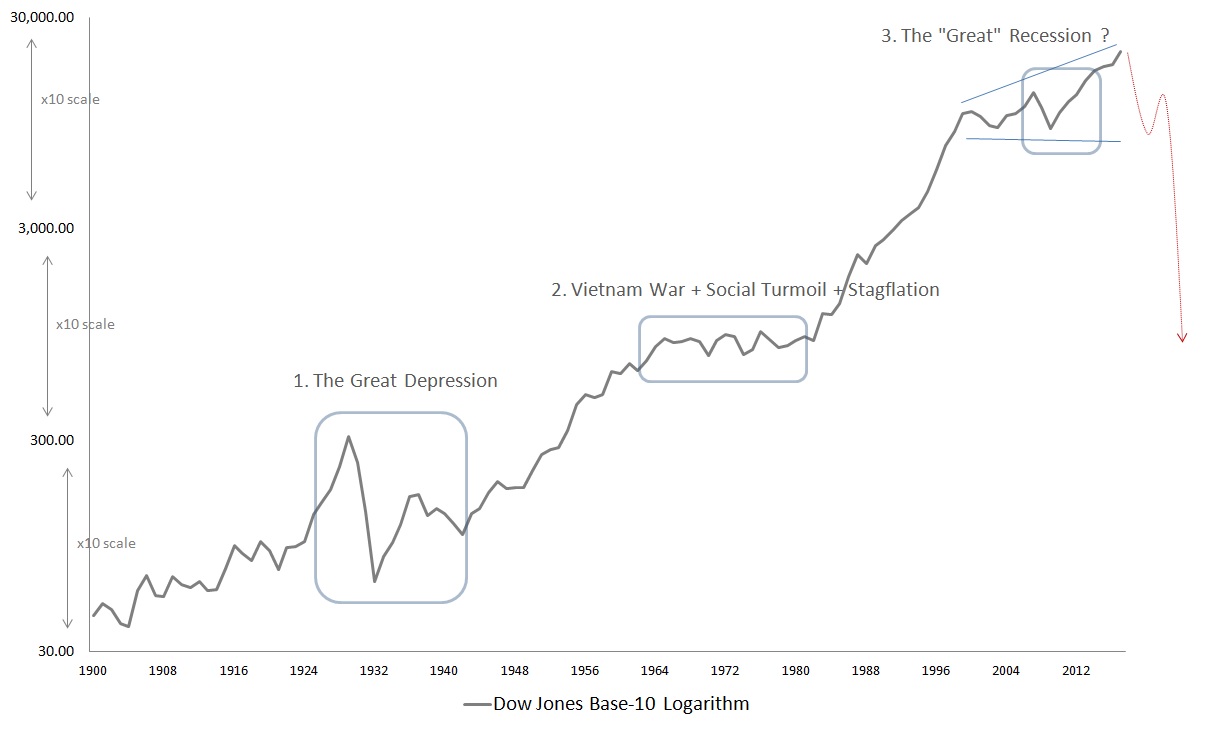 I have pointed out three areas of either a depression or extended recession. The most prominent example of an economic crisis is the market crash of 1929, which eventually sparked the Great Depression.

Note how dramatic the rise and fall of the markets were at that period, and also, the length of time necessary for a recovery. Indeed, the Dow Jones did not regain its pre-Depression highs (on a logarithmic basis) until well into the 1950s.

But in a way, this makes sense. A massive speculative rise in benchmark indices have to be corrected before a sustainable leg up can be enjoyed.

The next major bearish event in the Dow Jones was the period between the 1960s to the early 1980s. This time frame was heavily marked by the Vietnam War, and the incredible toll it took on American families, as well as the fabric of society.

Unsurprisingly, the shifting of mores was not great for the economy, which experienced stagflation. Unemployment was rampant, prices were soaring, and people had little hope for the future.

Logarithmically, the Dow remained flat for a good twenty years.

The 2000s decade was marked not by one market crash, but two of them. First, the tech bubble collapsed, then we saw the 2008 disaster. Yet the scale of these crashes — as you can visually see — is comparatively small. Furthermore, the Dow Jones quickly recovered from each collapse.

However, this trend of a market crash followed by a rapid recovery has created a dangerous technical pattern known as the broadening wedge. The exact opposite of a bullish pennant, this is a horizontal triangular pattern that extends from the initial apex out to the base. At the end of the broadening wedge, the market can no longer deny gravity, and it eventually collapses.

The warning is grounded in the fundamentals. Every major collapse signals an economic crisis. In such circumstances, the ugliness in the market has to be washed out. Failing companies must be allowed to fail. Only by purging the underperformers can we have a clean slate to rebuild.

This is not what happened in the so-called Great Recession. Instead of purging, we gave bailouts. Instead of holding bankers accountable, we gave them new jobs in evermore prominent positions. We have committed exactly the opposite response to what we should have done.

Trump or no Trump, we may be on the cusp of an economic crisis that is beyond anything like what we have seen in American history. Unfortunately, outside of a miracle, not much can be done to prevent such an occurrence.