How The Dow Jones Will Trade on “Bitcoin Time”

The mainstream media has had no shortage of criticism for Bitcoin and the blockchain markets. Accusations that the cryptocurrencies have entered into an unsustainable bubble are a dime a dozen, with new iterations merely being reshaped arguments. In a nutshell, the market valuation of Bitcoin no longer aligns with any reasonable method of price discovery.

But all these mainstream criticisms ignore the time acceleration of the blockchain. As I’ve argued in prior articles for Crush The Street and other media sources, Bitcoin and the cryptocurrency markets don’t trade based on limited time schedules. They’re open 24/7, 365 days a year, which is unlike the benchmark Dow Jones, which operates on six-and-a-half hour days, assuming that it’s not a weekend or holiday.

Therefore, if we are to compare Bitcoin to the Dow Jones (or any other mainstream index), we have to setup an apples-to-apples framework. In this case, we have to impose time acceleration onto the Dow — otherwise, the time-unit basis is so far off that the comparison wouldn’t make any sense. To put things into perspective, one year of “Bitcoin time” is more than five years in “Dow Jones time.”

Below, I have recreated how the Dow Jones index would look under Bitcoin’s time acceleration. To my knowledge, this is the first time such an exercise has been attempted, and thus would be a Crush The Street exclusive: 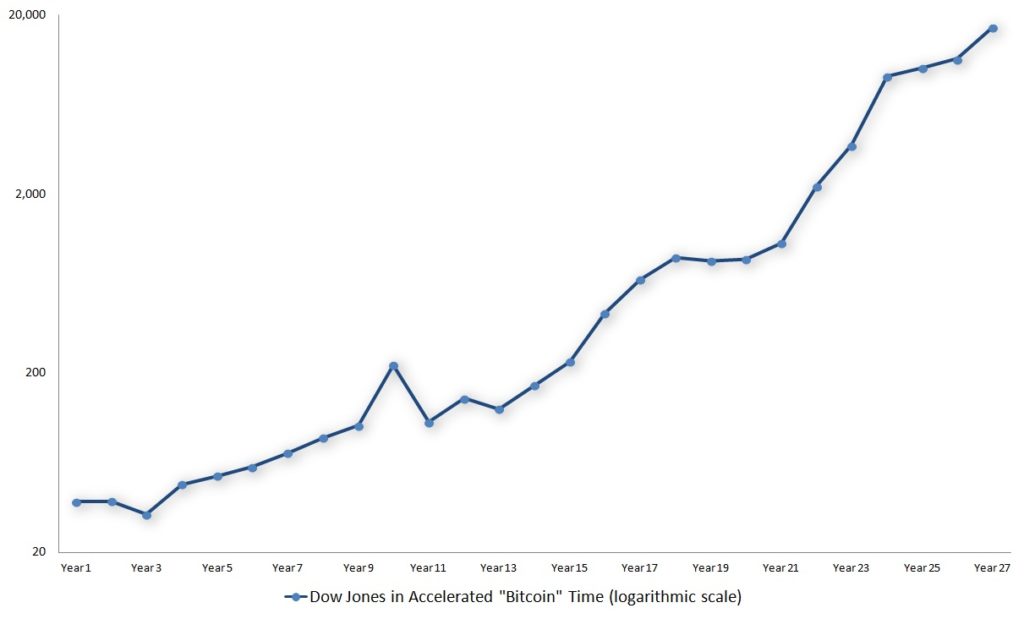 I will dive into further details regarding this analysis of time acceleration. One critical point to note is that in the past six years of Bitcoin time, the Dow Jones has experienced more upside momentum than in any other previous six-year period.

That’s rather phenomenal if you think about it. The mainstream has criticized cryptocurrency markets for rising too far, too fast. But that’s exactly what’s happening right now in the Dow Jones. Since the mid-1980s, the Dow has never gained so rapidly in market value throughout its entire history. Keep in mind that the Dow index launched in May of 1885!

Think of all the historical and economic paradigm shifts that have occurred in the past 132 years, from the Industrial Age revolution to manufacturing automation to two World Wars. No time period except the present age has resulted in such massive market movements.

My theory is that no amount of technological catalysts in the analog age could ever compete with the innovations of the digital age. In the analog time period, technology merely made things faster. In the digital period, we not only engage in business transactions near the speed of light, we are creating new industries that were previously impossible.

This is the reason why Bitcoin is rapidly gaining in market value — the eyes of the unseeing are finally opening. Ironically, all you need to know to justify the blockchain market’s valuation is the momentum recorded in the Dow Jones!