According to the World Health Organization (WHO), nearly 1,000 people have been infected or died due to a new Ebola virus outbreak in the Eastern Democratic Republic of the Congo (DRC) since Aug. 2018. This outbreak is the tenth in the DRC since it was discovered there in 1976, is the second-largest ever recorded, and is showing no sign of slowing while a toxic cocktail of violence and mistrust swirls around efforts to contain the virus. A population that already distrusts the modern medical profession due to their own beliefs and societal structure multiplies the problem.

“The country is concurrently experiencing other epidemics (e.g. cholera, vaccine-derived poliomyelitis, malaria, measles) and a long-term humanitarian crisis. Additionally, the fragile security situation in North Kivu and Ituri, further limits the implementation of response activities. As the risk of national and regional spread is very high, it is important for neighboring provinces and countries to enhance surveillance and preparedness activities… There is currently no licensed vaccine to protect people from the Ebola virus.” – WHO, Mar. 7

Go to WHO for more information about this map or right click on it and choose your “view image” option. 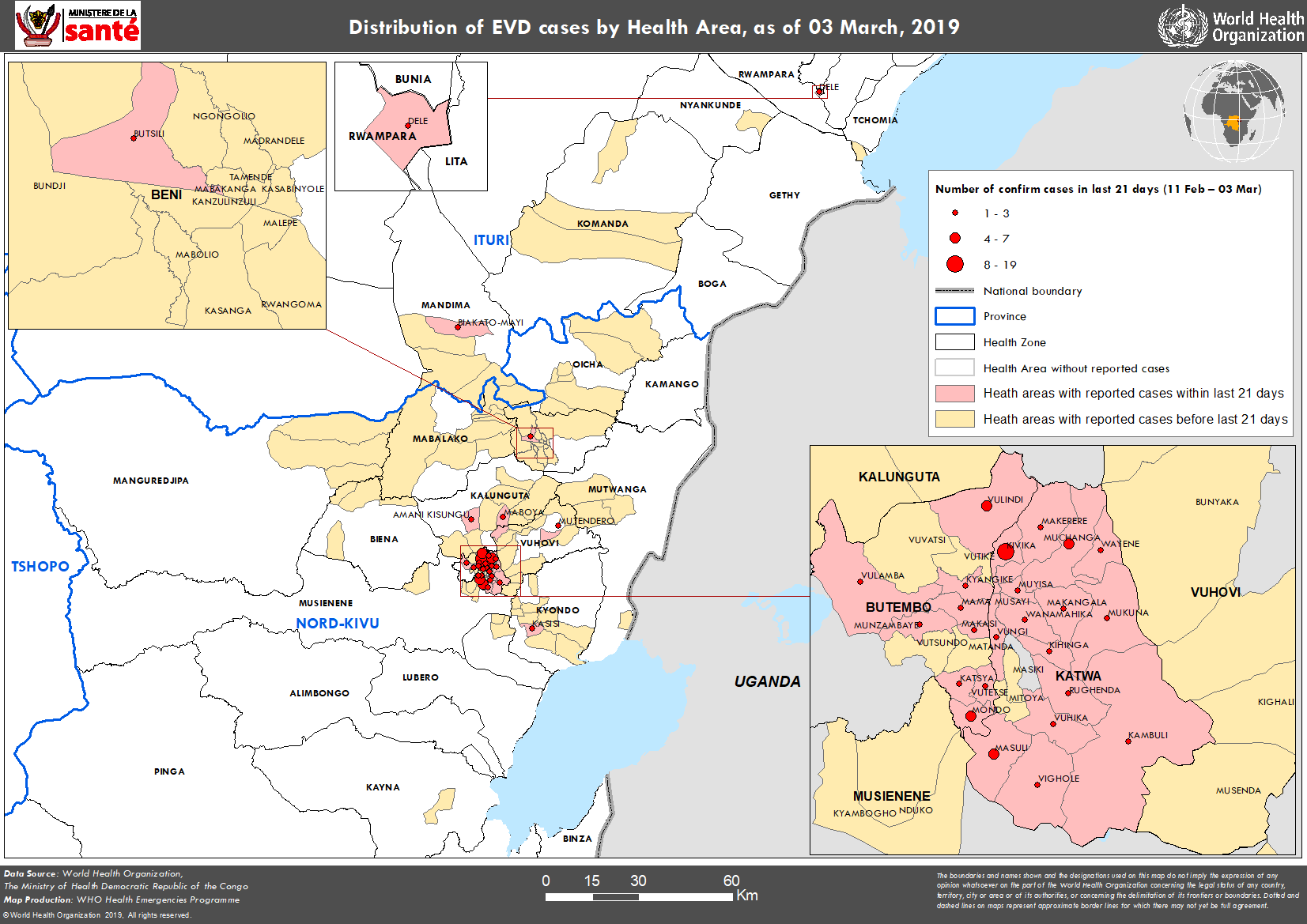 Civil war and political unrest in the DRC have surged in recent months. Armed assailants have attacked and destroyed treatment centers, and protesters robbed and burned facilities after the government blocked 1 million people from voting in the presidential election where the virus is nearing epidemic levels. Ebola responders who disseminate health messaging, track down cases, and bury the dead are facing threats of assault on a daily basis. Making matters worse, Doctors Without Borders suspended operations due to unrest and threats to personal safety.

Epidemiologists are concerned about recent data that suggests the virus is spreading undetected, making it more difficult to contain and driving up the mortality rate when compared to previous outbreaks. During the last three weeks of February, 43% of the people who died were located within their own communities when the disease is most infectious, rather than being isolated at a treatment center. Three-quarters of those diagnosed with Ebola were unknown as contacts of people who contracted the virus.

Ebola treatment center in Congo is attacked again; 1 dead… “Heavily armed assailants again attacked an Ebola treatment center in the heart of eastern Congo’s deadly outbreak on Saturday, with one police officer killed and health workers injured, authorities said, while frightened patients waited in isolation rooms for the gunfire to end… The early-morning attack in Butembo came less than a week after the treatment center reopened following an attack last month, which forced Doctors Without Borders to suspend operations in the city amid warnings that ending this outbreak is impossible if health workers aren’t protected… Doctors Without Borders president warned that Ebola containment efforts face a ‘climate of deepening community mistrust’ seven months after the outbreak was declared, and the use of security forces complicates efforts. People are still reluctant to bring the sick to treatment centers, Joanne Liu said.” – Washington Post, Mar. 9

WHO Director-General reiterates commitment to Ebola response despite another attack – – “WHO has requested and received further support from UN and local police forces to protect the treatment centres.” – WHO, Mar. 9

There are no Ebola virus countermeasures approved by the FDA. There are an experimental vaccine and several therapeutics, including three based on mAbs that target all three strains of the virus (Zaire, Sudan, Bundibugyo) being trial tested in the DRC.

Developing a single treatment that could potentially be used for patients suffering from all the different types of Ebola viruses is an enormous advancement in the field.” – John M. Dye, Ph.D., USAMRIID

The mAbs being tested in the DRC are Remdesivir (mAb114) by Gilead Sciences, Inc. ($GILD), REGN-EB3 by Regeneron Pharmaceuticals ($REGN), and ZMapp (MBP134) by MappBio (private). ZMapp is the control arm of Remdesivir and REGN-EB3, in collaboration with Adimab LLC (private) and the United States Army Medical Research Institute of Infectious Diseases (USAMRIID). If all goes well with ZMapp’s animal trials, the company will ask for FDA approval by 2022.

All roads appear to lead to Merck & Co. ($MRK) for vaccine production capability and deployment. The most promising near-term vaccine is V920 from Merck, which they licensed from NewLink Genetics ($NLNK) in late 2015. When tested in Guinea as a “ring vaccination” for high-risk clusters, of the 4,539 participants, no active Ebola infections were detected. When the 2014-2016 West Africa epidemic was nearing an end, Merck made a commitment to stockpile 300k doses for future outbreaks. Merck has collaborated with numerous external organizations to ensure a broad clinical program, with partial funding from the U.S. Government, including the USAMRIID, the Department of Health and Human Service’s Biomedical Advanced Research Development Authority (BARDA), the Department of Defense’s Defense Threat Reduction Program (DTRA), and the Joint Vaccination Acquisition Program (JVAP), among others. V920 has vaccinated 63k individuals in the current DRC outbreak, and an additional 120k doses were delivered in Feb. 2019. The WHO believes it will be effective in restricting the current outbreak.

In Nov. 2015, Merck began the FDA submission process for a biologic license application for V920. It is widely believed that the FDA will approve V920 in 2019 and it will secure a market-leading position in Ebola prevention.