In one of my most recent Steemit blog posts, I reported that one of the key reasons why the U.S. economy is so growth stagnant is the lack of risk. Today, we are inundated with messages that growth can occur in the absence of risk. The 401k plan, with its assumption of a 30 or 40 year lifespan that can “even out” volatility, is a prime example.

However, analyzing the history of our economy, from the late 1700s to the present era, demonstrates that robust GDP growth cannot occur in the absence of risk and uncertainty. The government and mainstream media constantly pushes the idea that these elements are negative because they engender instability. However, stability is its own form of instability because it makes the underlining economy unsustainable.

In other words, more supply is chasing after fewer goods. This is a critical reason why unfettered immigration must stop, and must stop now.

Notice that in my “economic sentiment” analysis below, the period of the most GDP growth – to the right of the 0% line – occurred in the years 1898 to 1946: 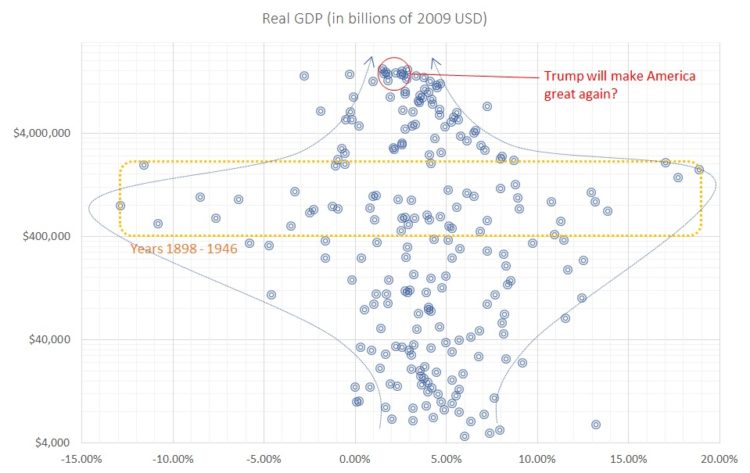 But did you notice that the period of extreme volatility in the economy also occurred in those same years? I repeat my thesis: GDP growth cannot occur in the absence of risk.

Our government, indeed, all governments in the world, have the opportunity to promote productive ventures that entail both risk and reward. For instance, we could dismantle Wall Street’s centralized control system and implement the blockchain for the greater efficiency of decentralization. But instead, the U.S. military industrial complex has other ideas.

When we look at the above chart, we’ll notice that the aforementioned years included both World Wars. Fortuitously, these mass conflicts on an unprecedented scale produced the military industrial complex, a new economy based on diversions, false flags, and the destruction of human life.

The risk, unfortunately, is only carried by the American citizenry in terms of caskets.

Given the fact that our GDP growth is completely stagnant, inflation is sky high, and our government is unwilling to explore new technologies (ie. blockchain), the only way to “Make America Great Again” is to spark another war.

Isn’t it interesting that President Trump has stated multiple times that “we don’t win anymore.” This sentiment clearly includes warfare.

Dear friends, you have been warned!