While the general public remains fixated on the political left-right paradigm, the vast majority are ignoring signs of the growing failure of the so-called economic recovery. The mainstream media touts the multi-year, record low unemployment rate, as well as strong consumer sentiment, as evidence that President Trump is at least doing something right. However, the reality is that the data actually corresponds to a recession, not a recovery.

To defend this thesis, we need to first lay out some basic groundwork. Under commonly-accepted economic principles, if the unemployment rate is low, consumer sentiment should generally be high. While exceptions always exist, for the most part, more people working equates to higher average wages. People with jobs tend to spend money, and have positive feelings towards the economy — hence, rising consumer sentiment.

In this scenario, the unemployment rate and consumer sentiment share an inverse correlation. That is, as one metric goes down, the other moves up. From the standpoint of an economic recovery, this is exactly what you want to see — fewer unemployed workers, and more people spending and reinvigorating the economy.

What you don’t want to see is a direct correlation. For example, a high unemployment rate shouldn’t generate strong consumer sentiment. Laborers that have been without jobs for an extended period of time almost always have a negative view about an economic recovery. Thus, unusual correlations may mean that some important factor(s) is off-kilter. 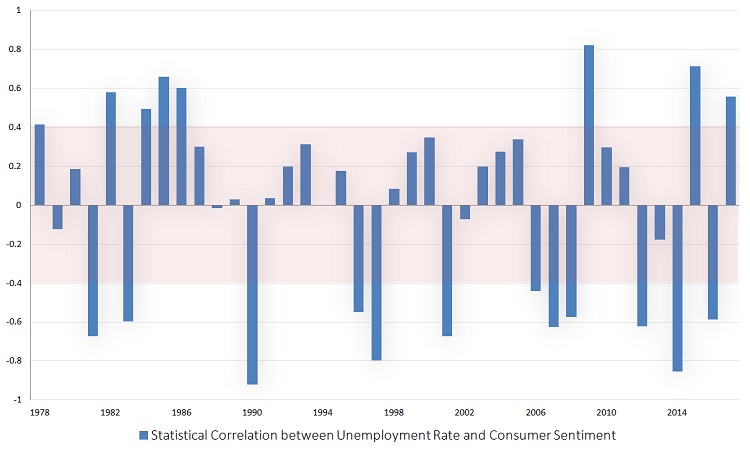 But that’s exactly what we’re seeing this year. Between January until the end of August, the unemployment rate and consumer sentiment share a direct 56% correlation. Since Trump assumed office, the jobless count remained consistently low. However, consumer sentiment has actually declined.

The strength of the correlation is significant here since not every data relationship is considered significant. Data points with a correlation coefficient of 40% or less are generally regarded as weak to not-at-all correlated.

Historically, there’s only been a few times where direct correlations between the unemployment rate and consumer sentiment are statistically significant. Most of those incidents occurred during the early years of the Reagan administration, which was attempting to recover from the fiscally horrific Carter term.

But now that we’re seeing the same unusual correlation in 2017, I have to seriously question the bullish argument about an impending economic recovery. No matter how I look at it, I can’t reconcile the idea that a record number of Americans are working, yet they feel unconfident about their future prospects.

That is, unless the economic recovery story was all just “fake news.”