The U.S. Education System Is Failing

While the internet has offered unprecedented access to information, it also represents a cruel irony: not enough students know how to convert data into knowledge. Moreover, many lack the cognizance to understand what is valid information and what is mere propaganda. Such is the state of our failing education system.

To be fair, no one negative catalyst exists. This is an incredibly convoluted and multi-variate situation. That said, one of the underlying themes of the decrepit education system is a cultural shift. In generations past, we allowed free market ethos to incentivize students to push to their fullest potential. If one failed to meet the standard, shame would naturally correct the underperforming student.

Today, the concept of shame is anathema to the education system. Instead, all students are the same and all contributions are equally valid. Thus, it doesn’t really matter whether someone tries their best or someone skates by: at the end of the day, everybody gets their As. Not doing so is tantamount to discrimination.

No wonder why a majority of teachers (or 61%) are stressed out. That’s according to a survey from the American Federation of Teachers, which also discovered that 58% of teachers characterize their mental health as “not good.”

Intolerance Baked into the Education System

No rational person should ever be surprised at the above statistics. Sadly and dare I say pathetically, we’ve thrown our teachers into the lion’s den. Not recognizing their humanity – and therefore, fallibility – we expect perfection from them. Not living up to this ultimate standard can have dire consequences.

Just a few months ago at the start of the school year, two teachers met with sharp criticisms. One in particular refused to call a transgender student by her requested pronoun.

For those that don’t know, a transgendered individual is someone who identifies with a gender other than the one assigned at birth. Among many people, especially conservatives, transgenderism is a hot-button issue. Nevertheless, even ardent conservatives have exercised tolerance toward this situation.

However, the extreme left does no such thing. Tolerance only works if you agree with their agenda. In the case of this teacher, he received “counseling” to correct his “wrong thinking.”

Again, I’m not surprised that our educators are increasingly disgruntled. Not only are the students much more audacious and volatile than they’ve ever been, academic professionals must increasingly put up with unreasonable demands.

Startingly, all teachers have a moral right to walk out of these ridiculously intolerant environments. But who would educate our children at that point? 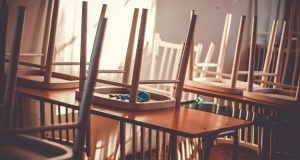