Encouraging Technical Trading Ahead of the Bitcoin Soft Fork

On August 1, bitcoin will incur what is known as a “soft fork,” or a partial change to the bitcoin protocol. Under Bitcoin Improvement Proposal (BIP) 148, the upcoming soft fork will invalidate some blocks or transactions, while at the same time validating others.

A soft fork is a less draconian approach to a hard fork, which involves a “permanent divergence in the blockchain,” according to Seeking Alpha‘s Martin YK Li. Nevertheless, the soft fork is a huge deal to bitcoin and cryptocurrency advocates. So massive are the implications that BIP 148 has already impacted the mainstream.

Fortune just recently reported on the price collapse of cryptos, as did several other major publications. In true “fake news” fashion, the mainstream amped up the rhetoric, likening the soft fork issue as a civil war among cryptocurrency miners.

I’m not particularly sure if such language is helpful. Bitcoin has a scalability issue, but this was known long ago. To have 21 million coins service the digital monetary demands of an entire planet was ambitious, to say the least. But warfare is an excessive term, highlighting the sensationalism that the mainstream levers towards cryptocurrency and blockchain assets.

Nevertheless, the digital markets are deeply — and rightly — concerned about the issue. Sensing the overall fear, traders have dumped out not only in bitcoin, but leading cryptos like ethereum and litecoin.

So can a solution be met, or is August 1 doomsday for the cryptocurrency markets?

While I don’t deny the ugliness in bitcoin and other blockchain assets, trading sentiment has picked up at time of writing, making this literally “breaking news.” Should this sentiment continue to hold, I would expect a reemergence of cryptos from their terrible malaise. 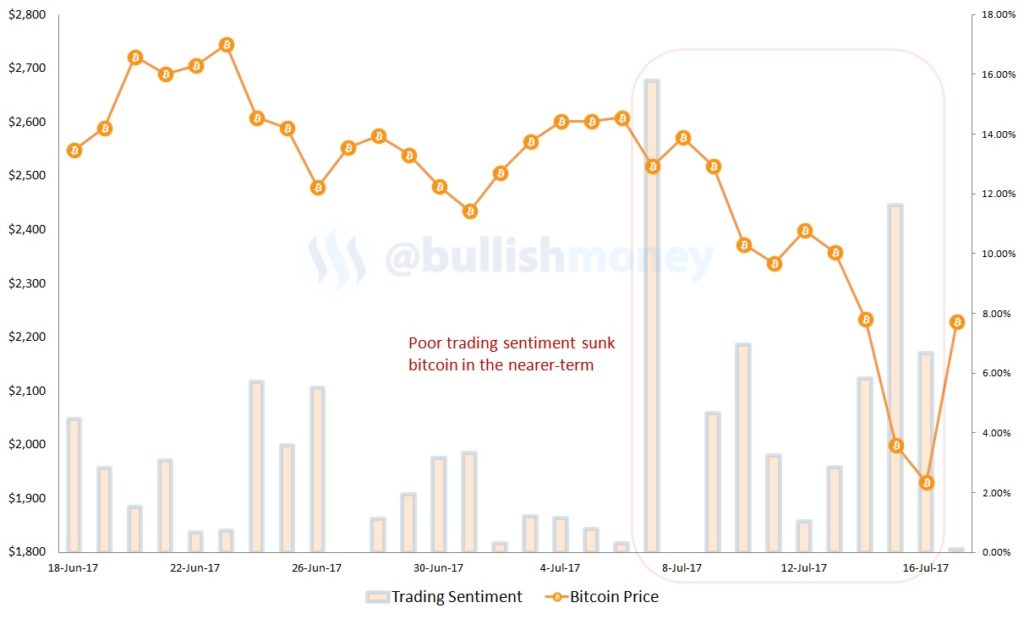 Between June 18 through the end of July 6, the variance between bitcoin’s session highs and its “close” averaged slightly less than 2.2%. Relatively speaking, we can argue that bitcoin enjoyed bullish trading sentiment as traders pushed the price towards the higher end of the session spectrum. Not surprisingly, bitcoin actually increased 2.4% during this time period.

However, from July 7 onwards, the variance from intra-session high to close jumped to 5.3%, or a 58% decrease in bullish trading sentiment. This average variance shifted bearishly because of a near-16% variance on the July 7 session. During this 11-day time period, bitcoin’s price tag dropped 11.5%.

Fortunately, we’re seeing some bright news. In the July 17 session which just closed, trading variance was only 0.09% — essentially nothing. Traders are now pushing the cryptocurrency markets back to the highs of the session. Again, without surprise, bitcoin enjoyed a massive upside yesterday, gaining a robust 15.5%.

Other cryptos, including both the majors and the altcoins, have witnessed similar magnitude surges. Should this create a ripple effect, the dreaded soft fork may be of little consequence to the markets.