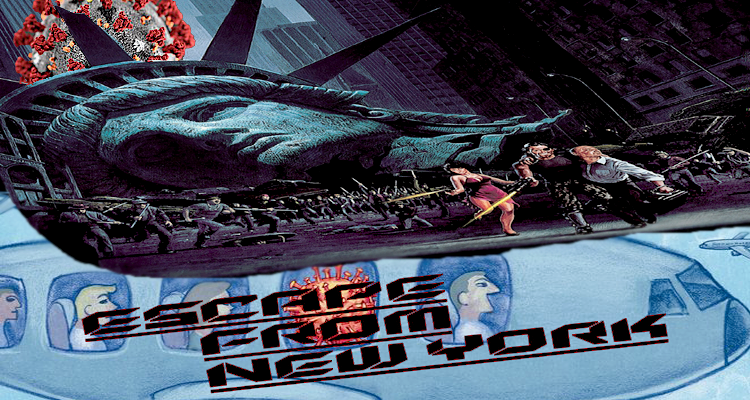 In Apr. 2019, I published “Pension Funds Unable to Save New York City from Bankruptcy Again,” and the 2020 pandemic turned out to be the wicked pin that pricked the inevitable bust. The Big Apple has not faced such a dire situation in 45 years, as the current amalgamation of social mobs bent on insurrection, economic turmoil, the mass exodus of residents to friendlier exurbs or rural communities, and political dysfunction on top of fiscal mismanagement will make the ‘70s experience appear like a walk in the park.

NYC Was Once Ravaged by Urban Blight Part 1… “The city was practically bankrupt and hemorrhaging population. Subway trains were covered in graffiti, inside and out. Crime was rampant. Women were warned to remove jewelry while walking the streets for fear that their necklaces would be ripped from their necks. Vast areas of the Bronx and Upper Manhattan were torched. Where nannies and their baby carriages gather today on the Upper West Side’s Sherman Square, drug pushers worked the spot they called Needle Park. Tompkins Square Park in the East Village and Bryant Park by the main library were permanent encampments for junkies, prostitutes, and drifters. People feared to wander in large portions of Central Park, even during daylight hours.” – StreetEasy, Apr. 2019

Nightmare in New York: How Covid-19, BLM protests and a liberal mayor are turning the city into a no-go zone as murders skyrocket, shops are looted and 500,000 middle-class residents flee… “Two bullet-ridden bodies lay sprawled on bloodstained concrete steps. Alongside, relatives of the victims are wailing and collapse to the ground. In another part of the city, a gang of youths use spray paint to disable security cameras before robbing a corner store. Later, video footage captures police officers sitting helplessly in their patrol car as a baying crowd hurls glass bottles at them. This is lawless New York – a city that was once America’s glittering crown jewel but which risks descending into mob rule.” – Daily Mail 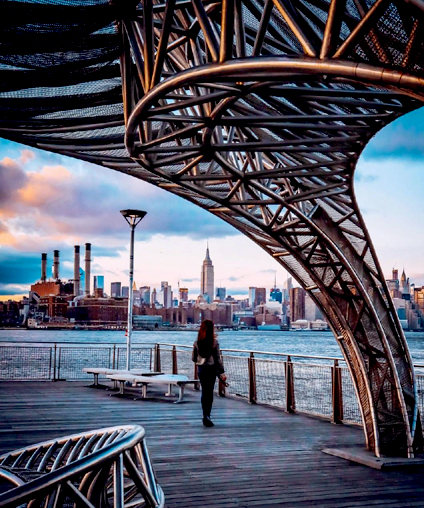 In my humble opinion, pre-pandemic NYC was fast approaching a megalopolis environment that is reminiscent of the film “Blade Runner” (1982) vs. devolving into a “Mad Max” (1979) scenario due to political and post-pandemic fallout. For now, it appears the city is treading water somewhere in the middle. If you are emotionally attached to bohemian enclaves and all the city has to offer as a resident, please don’t berate me for pointing to the mainstream media that is painting your neighborhood as the next no-go zone. As a former resident of the beloved Williamsburg Brooklyn hipster scene where I prospered during its gentrification process, commuted via subway (image: Ferry Pier), and succeeded at manifesting a rat-race living while thriving on the pulse of Manhattan for 25 years, I get it. I miss the hustle and bustle for many reasons, and most especially the friends I left behind. I do not envy their walking shoes at this point in time and would not trade my past decisions and current Live Free or Die residency at any price. There are many factors that contributed to my escape over a decade ago, but the current situation and prospects for a meaningful recovery to “normal” anytime in the near future are looking bleak.

Following is an experience that describes the painful disembowelment of a cherished NYC lifestyle that gets to the heart of the matter and attracts the attention of many. It is worth your time to read the whole gut-wrenching article.

NYC Is Dead Forever… Here’s Why… “When I first moved to NYC, it was a dream come true. Every corner was like a theater production happening right in front of me. So much personality, so many stories… Even in the 1970s when NYC was going bankrupt, even when it was the crime capital of the U.S. or close to it, it was still the capital of the business world (meaning, it was the primary place young people would go to build wealth and find opportunity). It was culturally on top of its game — home to artists, theater, media, advertising, publishing… I get it. There was a pandemic. But the question now is: What happens next?… What reason will people have to go back to NYC? I love my life in NYC. I have friends all over NY. People I’ve known for decades. I could go out of my apartment and cross the street and there was my comedy club and I could go up onstage and perform. I could go a few minutes by Uber and meet with anyone or go play Ping-Pong or go to a movie or go on a podcast and people traveling through could come on my podcast. I could go out at night to my favorite restaurants and then see my favorite performers perform. I could go to the park and play chess, see friends. I could take advantage of all this wonderful city has to offer. No more.” – James Altucher, Aug. 2020

Folks from all walks of life are exploring their options to escape NYC for good. The few that had the resources, a second home in the suburbs and elsewhere, or family to relocate with were able to flee early into the spring lockdown. The majority who own a slice of real estate don’t have the resources or luxury to risk leaving property behind that may not sell in the near-term or cannot afford the expense and risk the legal ramifications of leaving a rental apartment abandoned under the obligation of a lease.

NYC currently projects a $4.2 billion budget gap (vs. $453 million in 1975) that will approach $7 billion next year due to the pandemic fallout. The State Comptroller submitted a report on the fiscal situation.

NYC Faces Unprecedented Fiscal and Economic Challenges… “The social, economic and budgetary impacts of the pandemic have been unprecedented on New York City, the state and the nation. Without additional federal budget relief, the City will need to make hard choices to ensure budget balance in the current fiscal year and to close next year’s budget gap. More than 944,000 jobs were lost in March and April, the largest job loss since the Great Depression. The unemployment rate, which had fallen to a record low of 3.4% in February 2020, shot up to 20.4% in June, the highest level in 44 years… To offset the loss and to address its other needs, the city freed up $11.4 billion in resources. Nearly $4.1 billion came from reserves, including $2.6 billion from the Retiree Health Benefits Trust. The city also reduced the general reserve for FY 2021 from $1 billion to $100 million, the statutory minimum for the start of the fiscal year… next year’s budget gap may exceed $6.5 billion.” 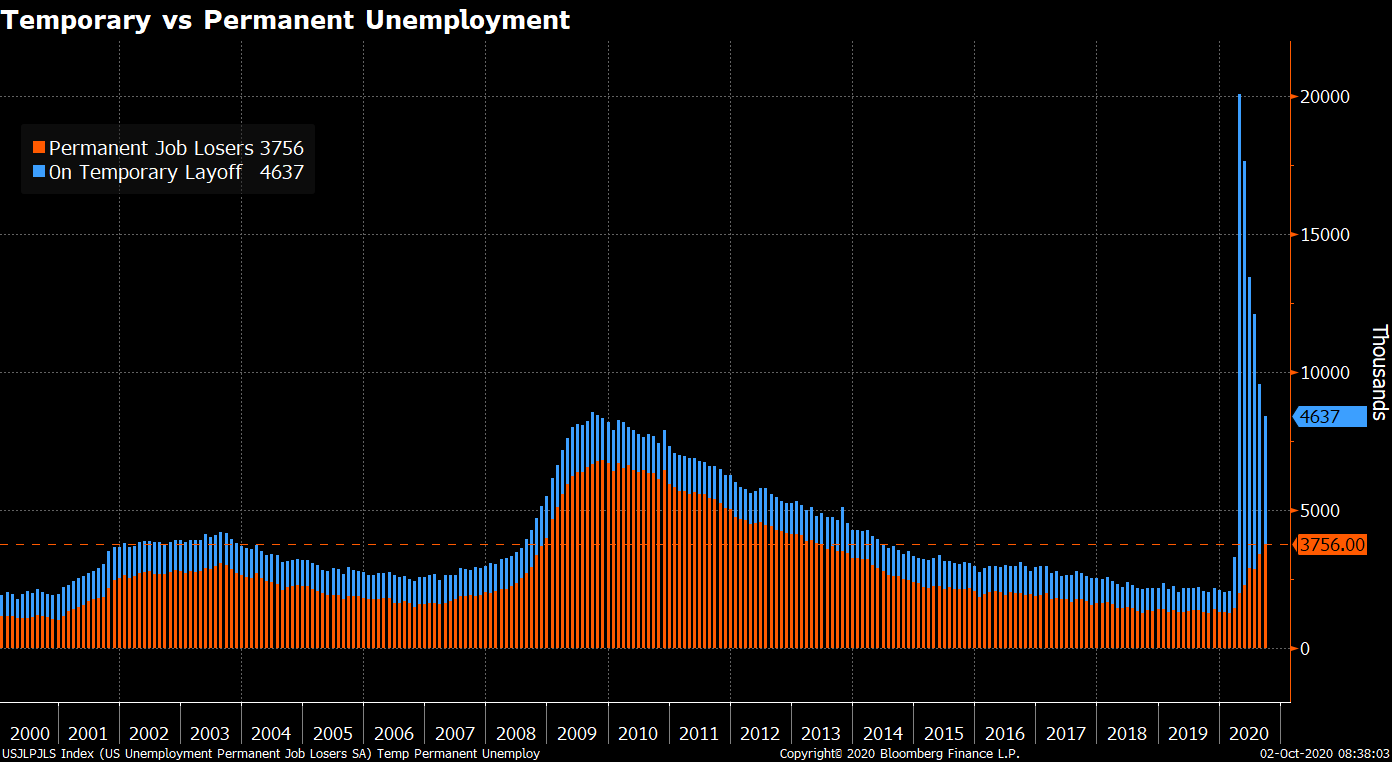 With the economy of NYC teetering on oblivion, a plunging real estate market, and a fiscal situation that is beyond redemption, the last thing it needs is a pandemic second wave that inflicts additional economic pain and forces some level of renewed lockdowns. Unfortunately, the worst-case scenario may have already begun and a large chunk of businesses in the retail and service sector are likely to go under whether or not a second wave wreaks havoc this fall and winter.

Fearing 2nd Wave, N.Y.C. Will Adopt Restrictions in Hard-Hit Areas… “Governor Cuomo said he would not yet allow the city to close the nonessential businesses, suggesting that the ZIP codes that were being used to identify hot spots were too imprecise to guide shutdowns. The more pressing problem, he said, lay in schools and houses of worship, including many that cater to Orthodox Jews, rather than businesses that ‘are not large spreaders.’ The dissonance in messages from the state’s two most prominent politicians created confusion for residents, business owners and parents in the affected areas and drew scrutiny to the conflict between city and state over how to tackle early signs of a second wave of the virus in its one-time epicenter. The governor’s announcement also seemed to be yet another manifestation of his long feud with mayor de Blasio. Governor Cuomo has frequently second-guessed or overruled the mayor, who is also a Democrat… The governor also announced that the state would take over supervision of enforcement of mask and social-distancing rules in the hot spot clusters, presumably by putting the State Police in charge of New York City Police Department officers… Shortly after the governor spoke, mayor de Blasio reiterated that he believed the city would still be closing nonessential businesses, even as he acknowledged that the governor’s staff was ‘considering if they have alterations to that geography or that approach. ‘Until we hear otherwise, our plan is to move ahead Wednesday morning with enforcement in those nine ZIP codes.’” – NYT 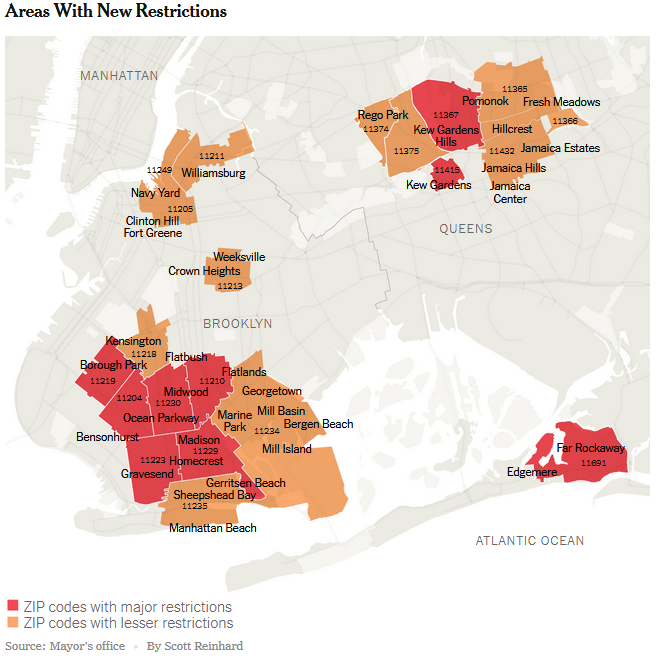 I believe NYC will eventually return to its heyday and surpass anyone’s expectations. But for now, it would be prudent to prep, pray, and stay out of the way.